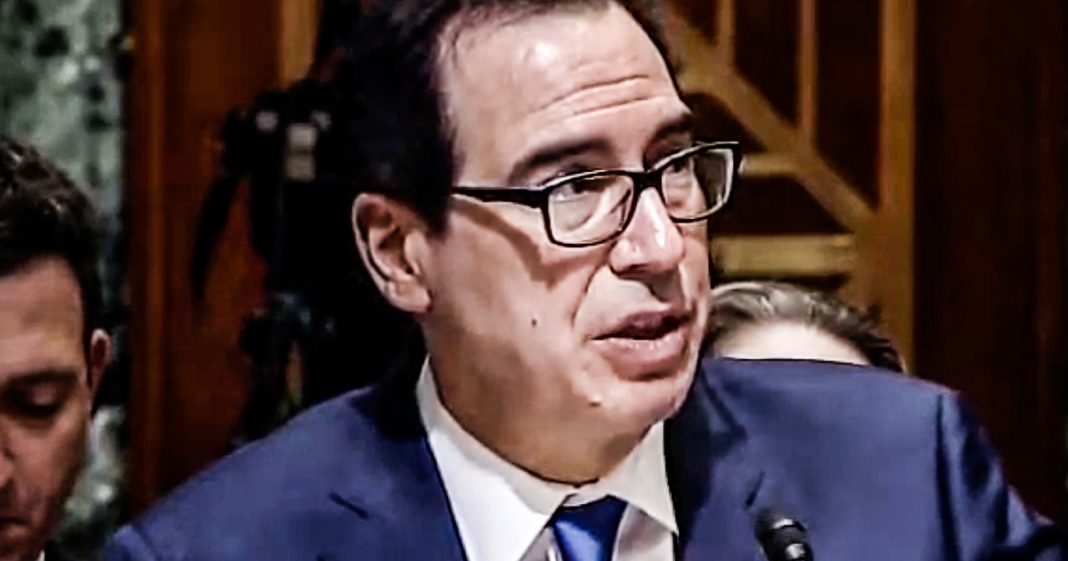 During a Senate Finance Committee hearing earlier this week, Treasury Secretary Steve Mnuchin confirmed that Trump has been lying about protecting Social Security and that his 2021 budget proposal does, in fact, call for cuts to the program. It isn’t surprising that Trump is lying, but it is rather interesting that Mnuchin was willing to admit this during the hearing. Ring of Fire’s Farron Cousins explains what’s happening.

On Wednesday, treasury secretary Steve Mnuchin had to go for a Senate finance hearing, and during that hearing, he was pressed by Democrats about Donald Trump’s 2021 proposed budget and the cuts to Social Security that the president wants to make. Now it’s very clear in that budget, Donald Trump is cutting Social Security, even though he’s been telling us every day since that budget came out. No, no, I’m not cutting Social Security, of course not. That would be crazy. Democrats want to do that, not me. Well, during this Senate hearing, Steve Mnuchin when pressed on it, finally admitted that, yeah, okay, we’re gonna cut Social Security, except he used what they described, what Democratic Senator Ron Wyden described, as Washington speak. He said the following, he said, I believe it’s not a cut. It’s a reduction in the rate of increase and it’s not to the benefits of people on Social Security. Well, the second part is a lie, it is to the people on Social Security and it is to the people who are getting Social Security disability benefits. But it’s not a cut, it’s just a reduction in the rate of increase.

That’s a cut, by any definition, Mr. Mnuchin, that’s, that’s a cut. You can use all your fancy linguistic tricks, whatever you want to do, but we’re not morons, right? You’re not talking to the president of the United States anymore. You’re talking to the public, you’re talking to senators. We understand what a reduction in the rate of increase means. It means you’re cutting it. You are cutting Social Security so that you personally and the president personally and a few others get a tax cut. That’s why this is happening. That’s why you’re doing this because you want more money in your pocket. Trump wants more money in his. Many of the people serving in both the House and the Senate want more money in their own pockets, so yeah, they’re going to say, sure, let’s cut Social Security. Let’s cut Social Security disability benefits. Let’s cut Medicaid and Medicare and food stamps and everything else that we need to help those in need because I want more money and so I’m going to do this.

Donald Trump is lying through his teeth, which is nothing new, about what he’s going to do to Social Security. There are massive cuts into these programs in this 2021 budget. The only question at this point is, are House Democrats really going to stand up to him? I mean, we thought they’d stand up to him with a $740 billion military budget, but they didn’t. We thought they were going to stand up to him with the funding for his border wall, but they didn’t. There have been too many opportunities for Democrats to do the right thing when they have fallen down on their faces instead, and I am terrified that this 2021 budget might be another one of those instances.