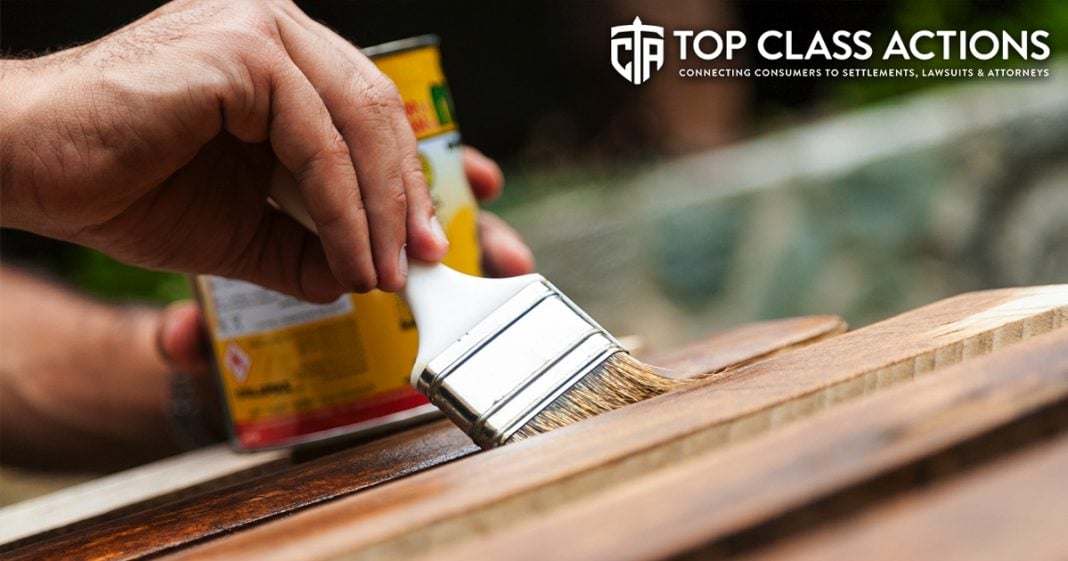 Rust-Oleum Corporation has been hit with a class action lawsuit by consumers who claim that the company’s Restore products, specifically Deck Start Wood Primer, Restore 2X One Coat Solid Stain and Restore 4X Deck Coat, do not work as advertised. Plaintiff Allen Garrard says Restore products suffer from more chipping, peeling and flaking than other comparable products.  Ring of Fire’s Farron Cousins discusses this with Scott Hardy, the President of Top Class Actions.

Farron Cousins:                  Your home is likely going to be the biggest investment that you ever make. And whenever you’re doing a home improvement project or making repairs, you want to make sure that you do the best possible job or you hire the best possible people with the best possible products to make sure you don’t have to go back and redo that job in a few weeks, months or even a couple of years. But unfortunately some of the products out there are far inferior to others on the market and consumers are getting scammed. And I’m joined now by Scott Hardy with Top Class Actions to tell us about one of these scams we’re finding out about now and Scott, this is Rust-Oleum who has a line of products called Restore. And these hugely expensive products Rust-Oleum puts out are supposed to protect your deck, right? It’s, it’s kinda like the, the wood protectors you see commercials for in between football games in the fall. And the people who filed this lawsuit, the plaintiffs, they say, listen, I spent hundreds of dollars on this and it is not doing anything that it was advertised to do. So, so tell us what, what happened.

Scott Hardy:                          Sure. So this class action alleges that Rust-Oleum’s Deck Start Wood Primer, Restore 2X One Coat Solid Stain and Restore 4X Deck Coats, do not live up to their expectations. Don’t actually protect your deck for years and years as is promised and, you know, they, they fail. So this plaintiff spent more than $500 went into his local hardware store in 2017 and then took care of his deck. You know, applied all of the, the, the deck code as prescribed by the manufacturer. But lo and behold, this is from September, just by May, 2018 he noticed that the Restore paint was detaching from numerous spots in the deck and had to be repaired. And so by January, 2019 he saw, you know, the paint detaching, peeling, flaking, lots of issues, which is why they filed this class action. They said, listen, you know, I can’t buy this stuff and then a year or not even a year later, start, start seeing problems when you invest all this money and time in trying to take care of your beautiful wooden deck. Because of course, it’s a wooden deck. If you don’t take care of it, it will fall apart and you’ll have to be replaced. So you could be stuck with tens of thousands of dollars in damage.

Farron Cousins:                  Right, and I think that’s a very important thing to point out with this particular case is it’s not just, oh no, my product didn’t work and I had to go back and redo it and I spent a couple of hundred dollars on this. It’s no, if this product fails to do what it’s supposed to do, this can lead to much bigger problems. It can lead to, you know, rotting of the wood. It can allow other kinds of, you know, wood fungus’s, termites, whatever it is. That’s why you have to protect it. This is something that is out in the elements and exposed to these kinds of things every single day. And this man did exactly what he is supposed to do to protect his property with this product. Used it as directed. The product did not live up to the claims that it had made. Not just expectations, but this product said it will do X, Y, and Z and it did not do X, Y, or Z. And that’s why this man has filed this suit.

Scott Hardy:                          It sure looks like it and this class action is very eerily similar to a settlement that was made in 2016. In that settlement you had Rust-Oleum and their deck products that were included in a massive settlement. So if you had painting, peeling, flaking and you had to get your deck replaced, repainted, you could actually get reimbursed for those expenses. That one included Restore products Deck & Concrete Restore, Deck Restore, Concrete Restore or Restore 10X. It did not include Restore 10X Advanced, Restore 4X or other Restore products which are included in this class action. So, it’s interesting that we see a class action settled, you know, four years ago and paid out and, you know, four years later we see very, very similar problems with the manufacturer and we’ll likely see a similar outcome. So if you had, if you used those Rust-Oleum products on your deck and you had to replace it, repair it, find those receipts, do that research now because you could get hundreds if not thousands of dollars back in your pocket once this eventually settles.

Farron Cousins:                  You know, it’s also really disappointing to hear about that because obviously, okay, this company was, was put on notice there’s problems with your products. You have to do something about this or you’re going to pay out lots of money and here we are four years later, the company didn’t do anything about it, at least with their other products. They thought, okay, well these aren’t being sued. We can just leave them as they are, when in fact the company could have fixed this years ago and then failed to do it. Not exactly building up a good reputation with consumers by knowing you have a problem and then failing to do anything about it until you’re forced to do something about it. To me, you know, that, that doesn’t create a lot of faith in the company, does it?

Scott Hardy:                          No, you know, Rust-Oleum is a trusted brand. You and I talked about Rust-Oleum spray paint. People use it, they trust it from spray paint. So they must think, hey, I can use this right on my deck. It works. They, you know, their spray paint is fantastic. So, you know, we really hope that Rust-Oleum does the right thing, not only pays their customers back and, you know, for any repairs, but they work on the ingredients themselves. So that way people don’t have this problem and we don’t see another settlement in four years for a new product that they rename or change out.