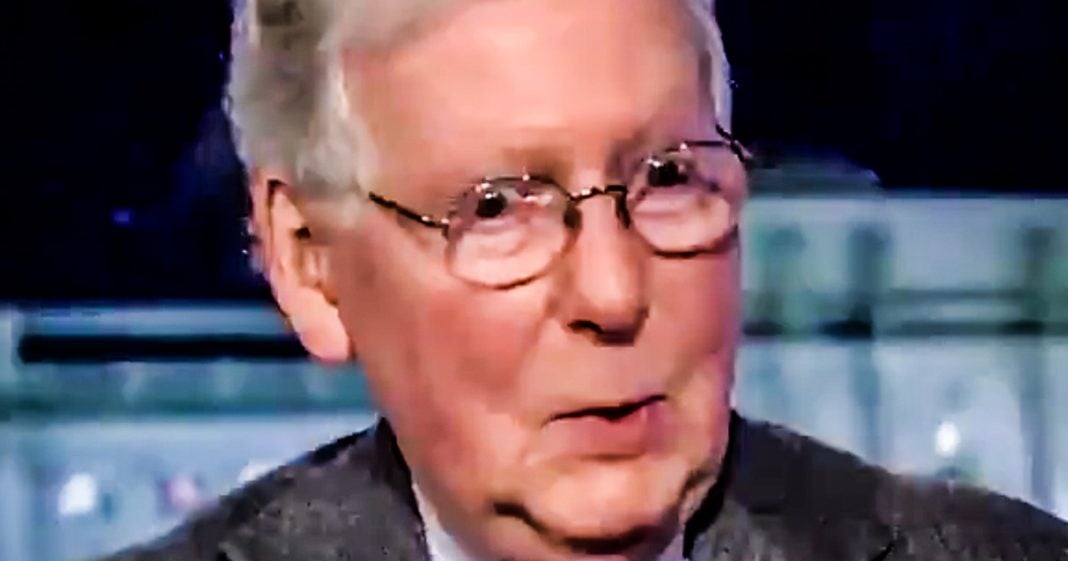 Mitch McConnell finally came clean during an interview on Fox News this week where he confirmed that the House Democrats have sent 395 bills to the Senate. McConnell also confirmed that he has absolutely no intention of bringing any of those bills up for a vote. This clip should be used as a campaign video for every single Democrat running for office, as Ring of Fire’s Farron Cousins explains.

For months now, Donald Trump has been calling the Democrats in the House and Senate, the do nothing Democrats. It’s his election strategy of trying to paint the Democratic party as a party that’s not doing anything other than attacking Donald Trump. But yesterday on Fox news, speaking with Bret Baier, Senate majority leader Mitch McConnell actually blew up Donald Trump’s favorite nickname for the Democrats when he said this.

Mitch McConnell:             Well, it is true. They’d been on a full left wing, uh, parade over there. You know, trotting out all of their left wing solutions that are going to be issues in the fall campaign. They’re right. We’re not going to pass those.

So it’s true, according to Mitch McConnell, it’s true that the Democrats are out there passing legislation left and right in the House of Representatives, 395 bills sitting on his desk. And then he confirms to Bret Baier that I’m not gonna do anything about it. I’m sorry, let’s use Mitch McConnell’s voice. I’m not gonna do anything about it. I mean, really watching that clip was incredibly painful because Mitch McConnell speaks like he is basically on his death bed or that maybe he has an entire apple stuck in his throat, but that’s not what this is about, right. This is about the fact that there’s 395 pieces of legislation, everything from reducing the cost of prescription drugs, securing our elections, doing something about the gun epidemic here in the United States and hundreds of others. Those are the things sitting on Mitch McConnell’s desk, the self-proclaimed grim reaper of progressive legislation and he just admitted that, yeah, the Democrats are working their butts off and I’m the one not doing anything about it.

That clip needs to be used in a campaign ad by every single Democrat running for public office this year. It blows up Donald Trump’s point that the Democrats are do nothings when in fact Mitch McConnell just said he is the do nothing and he’s not going to do anything about these pieces of legislation because they came from Democrats. This man is an absolute partisan hack who is helping to destroy this country. There are very good pieces of legislation in there some of them bipartisan, by the way. This is not all just Democratic legislation. They’ve got tons of Republican votes for these things. Because sometimes even a few Republicans out there say, you know what? We actually need to do something about this. This is a problem. Let’s fix it. But Mitch McConnell refuses to do it because if he does, it’s the Democrats that get the credit. It’s the Democrats who in the eyes of the public get to be the heroes here and Mitch McConnell can’t stand that because he knows his election can’t stand that. But that’s what’s happening, folks. 395 pieces of legislation at this moment that Mitch McConnell himself personally decided to kill.