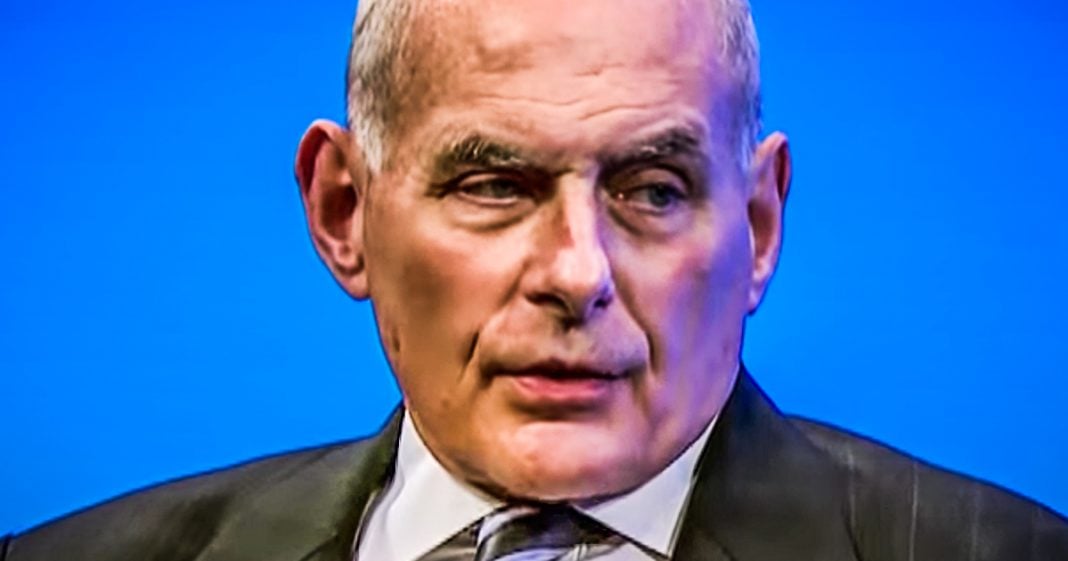 Former Trump Chief of Staff John Kelly had some pretty harsh words for Fox News viewers during a forum on Wednesday when he told them that they weren’t informed Americans. That was a knife that cut deep into Trump himself, but it wasn’t the only barb that Kelly threw during his 75-minutes on stage. Ring of Fire’s Farron Cousins explains what happened and why Kelly took so long to finally speak out.

Earlier this week during a forum at a college in New Jersey, former Donald Trump, chief of staff, John Kelly, took several, I guess you’d call them, stabs at the president. First and foremost, he said that the president was wrong to fire Vindman and Sondland and actually defended the actions of Vindman and Sondland. But it wasn’t just that, you shouldn’t have fired these guys or relocated them and you shouldn’t have retaliated against them for testifying against you. It was the fact that Kelly said that these men did what they were supposed to do. Because John Kelly being a military man himself, he’s a general, he said that when you’re given an illegal order, the thing to do is to go and report it. And that is exactly what these individuals did along with several others, including the whistleblower. So Kelly is basically telling us that Donald Trump gave an illegal order, but that wasn’t the biggest hit against Trump. No, the biggest hit that he had against Donald Trump and his followers was when he said that people who rely solely on Fox news are not informed citizens.

Kelly’s exact quote was, you have to be careful about what you’re watching and reading because the media has taken sides. So if you only watch Fox news because it’s reinforcing what you believe, you are not an informed citizen. Now, Kelly’s comment here was, you know, basically about how you’ve got to absorb all kinds of media. It wasn’t actually a dig at Fox news viewers the way a lot of us would like to think it is, right? We go out there all the time and we tell you if you’re, the only thing you’re watching is Fox news, you’re, you’re not a smart person. You’re not intelligent on the issues. You don’t know them because Fox news doesn’t explain things to you. It’s just propaganda. That’s not exactly what Kelly was saying. He was saying, if you’re only reading or watching one side, you’re not well informed.

And that’s also true. But in the case of Fox news, if you’re watching Fox news, you’re definitely not informed. And believe it or not, folks, that’s not opinion. Polls and studies have shown that people who rely on Fox news are severely less informed than the consumers of any other news outlet. So yeah, Fox news is dangerous. Fox news is toxic and Fox news will make you stupid. But Kelly wasn’t necessarily going that far and talking about all the research that proves this, he was just saying, hey, maybe absorb both sides of the news. Right. But he also did kind of implicate Donald Trump and giving an illegal order. And I just have to say how brave it is for John Kelly to come out and finally say these things now, now that none of it matters, now that he’s not a member of the Trump administration and now that he’s just a regular old retired guy, none of this matters.

I mean, he even mentioned that, you know, I had a feeling Kim Jong-un was going to play us the whole time and take advantage of us and he did. Well wow, John Kelly, that’s awesome. Why didn’t you tell that to Donald Trump when you were working for him? You’ve been gone from the administration for a year. The impeachment trial is over and now you decide to come out, show your true courage and be like, hey, yeah, what he did was illegal. Fox news makes you stupid. He’s getting played by Kim Jong-un. Thank you very much for the opportunity to speak for 75 minutes at this forum about things that no longer matter. That’s the problem, right? Kelly was brought into this administration because he was going to be the adult in the room. The things he just said at the forum earlier this week were the things he should have been saying to Donald Trump from day one, but he didn’t. He didn’t reign in Donald Trump. Instead, he got roped into all the chaos. Rather than being the adult in the room, he became another one of the toddlers and now he wants to go out there, rehabilitate his tarnished image by telling us that, yeah, I also think Donald Trump was a little bit crazy. So can we finally be friends again? The answer to that is no.