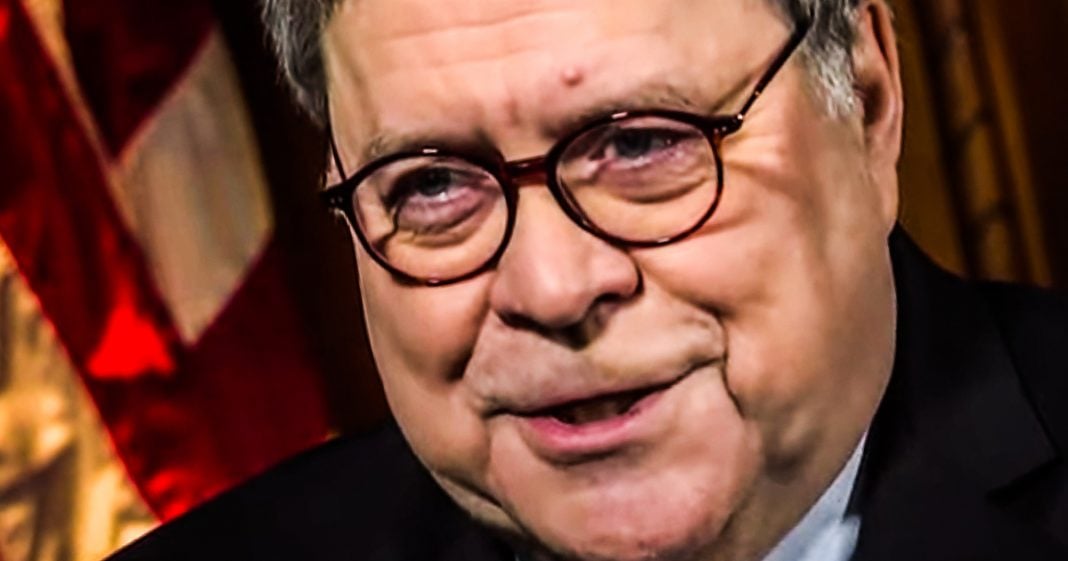 Attorney General Bill Barr said in an interview this week’s that Donald Trump’s tweets about the Roger Stone sentencing have made it impossible for him to actually do his job as AG. Later that same day, the White House said that they had no problem with Barr’s statement, which only raises even more questions. Ring of Fire’s Farron Cousins attempts to explain what is going on and why Trump isn’t freaking out about Barr’s comments.

Attorney general Bill Barr gave a surprise interview to ABC news earlier this week that aired on Thursday and in that interview Barr actually said that Donald Trump’s relentless tweeting, specifically about the Roger Stone case, is actually making it “impossible” for Barr to do his job. Here’s exactly what he said, he said, Trump has never asked me to do anything in a criminal case, but he should stop tweeting because his tweets make it impossible for me to do my job. But then he went on to say this, I’m not going to be bullied or influenced by anybody, whether it’s Congress, a newspaper editorial board, or the president. I’m going to do what I think is right and, you know, I cannot do my job here at the department with a constant background commentary that undercuts me. It’s pretty strong words because we know what that background commentary is, that’s Donald Trump’s tweets. So what’s Bill Barr trying to say here? Is he trying to say that the president needs to just shut the hell up and let him do his job because he starting to make him mad? That’s what it sounds like, but things aren’t always what they sound like. Right? Later on in the day, the White House came out and issued this statement. They said the president wasn’t bothered by the comments at all and he has the right just like any American citizen to publicly offer his opinions.

President Trump uses social media very effectively to fight for the American people against injustices in our country, including the fake news. President has full faith and confidence in attorney general Barr to do his job and uphold the law. That, that’s an actually very, very reasoned and well thought out response from the White House and we don’t ever get reasoned or well thought out responses from this White House. So something doesn’t smell right about this story. Right? William Barr goes out there, says Trump’s got to stop tweeting. I’m not going to take orders from anybody, which you kind of have to actually, Barr. You, you really do. I mean, you don’t have to follow the illegal ones, but you are serving at the discretion of the president of the United States. So yes, part of your job is unfortunately to take orders from this madman. But why wasn’t Trump angry? Why did the White House not issue a furious response? Again, none of this makes any sense because it doesn’t follow the pattern that we have seen play itself out for the last three years. So in my opinion, there’s one of two possibilities happening here.

One, Trump is afraid to go after William Barr because Barr knows where the bodies are buried, figuratively speaking, hopefully just figuratively speaking. Barr knows every dirty deed that the president of the United States has done and he is one of the few people in this country in a position to actually do something about it. So Donald Trump cannot risk being mad at him, yelling at him, reprimanding him or him on Twitter because Barr could end it all like that. So he’s gotta be nice to Barr or, and this is the prevailing theory going around social media, this was somehow coordinated between Barr and Trump. They had agreed that Barr would go out there, attack Trump for his tweets so that they could create some distance between the two groups and make it not seem like they’re working hand in hand, trying to undercut justice with the Roger Stone case and so many other issues. Those both make a lot of sense and I believe there’s a little bit of truth to both of them to be perfectly honest with you, but when it comes to the Roger Stone case, it’s almost undeniable.

Barr can say that he’s not taking orders from anything, anybody. The president hasn’t, you know, directed me to do anything in a criminal case, but he did. We know that. We saw the tweets. We can look at the timeline. Your justice department said seven to nine years, Donald Trump came out, attacked y’all relentlessly. Then y’all came out and said, you know what? Let’s not go seven to nine. Let’s make it a lot less than that. You took the order, you knew what that was. You knew what those tweets meant. But you also have a hearing coming up in the House of Representatives over your actions here, and that’s why you want to create a little bit of space, just that little bit of distance between you and Donald Trump. So that you can go into that hearing whenever it happens and say, yeah, did you see my ABC news interview? Man, I torched the guy. Clearly, clearly I’m not in his pocket because this wasn’t by any stretch of the imagination, a well-orchestrated attempt to make me appear independent.