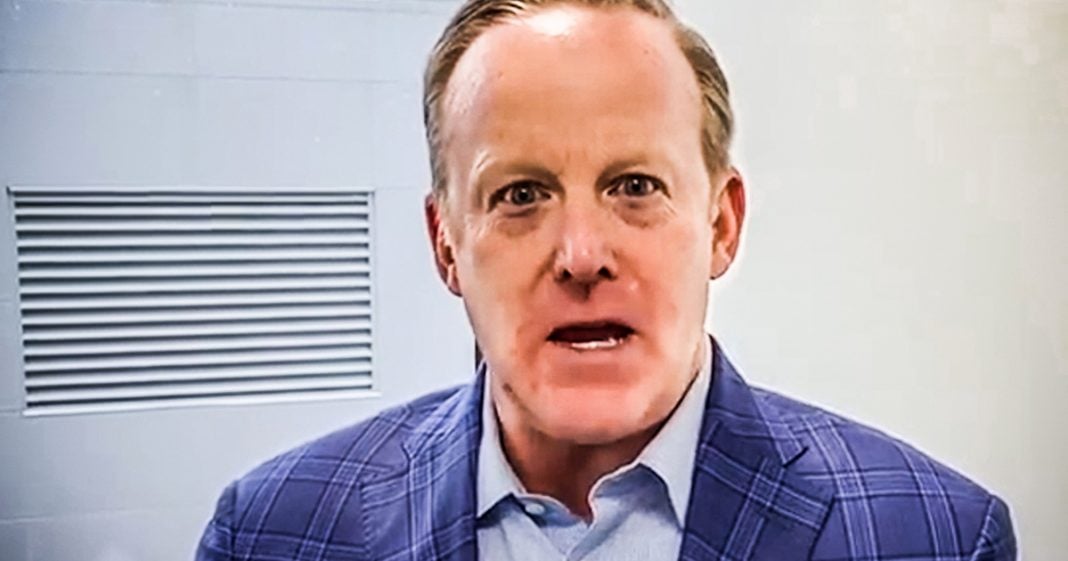 Like so many other public figures before him, former White House Press Secretary Sean Spicer has joined the Cameo website and he’s offering his fans a special deal – for just $200, a 50% discount, you can send your loved one a special Valentine’s message from Spicer himself. Anything to make a quick buck, and to rehabilitate his tarnished image. Ring of Fire’s Farron Cousins discusses this.

Well folks, Valentine’s day is tomorrow and if any of you are looking for a last minute gift for somebody you allegedly love, might I suggest this?

Sean Spicer: Hey guys, it’s Sean Spicer with an amazing deal this month or the entire month of February, my videos that normally cost $400 over 50% off 190 $900 he’s going to give you the best Valentine’s day gift ever. What way to say I love you. I’m thinking of you this Valentine’s day and a video from me, but the best part about this is all the proceeds go to the independence fund this month would provide track wheelchairs to our injured service members who have mobility issues. So you’re doing something really good and you’re giving the best gift that you can possibly give to that special person in your life. A video from me, thanks a lot.

That’s right, folks. If you really want to impress your significant other, or maybe even just somebody you’ve got a crush on, Sean Spicer is the way to go, and Hey, he’s cut the price down by 50% little under $200 and you too can tell your loved one how you feel by using one of the biggest liars ever to serve in the Trump administration. Here’s the thing, Sean Spicer, this little thing here, this is from cameo. This is what a lot of celebrities, public figures, whoever’s you know, harder up for cash using this thing. You can pay them some money, they’ll make you a quick little video. It’s fun. It’s cute. You know, you get a personalized message from a celebrity, but Sean Spicer is a known liar. Sean Spicer is not someone you should trust. So if I were to go home and show my wife like, Hey, Sean Spicer says I love you, she would probably immediately think, well, we’ll spice her lies all the time.

So you tell me you want a divorce. I don’t understand this. You know? Could you imagine being the kind of person who would sit down for a romantic evening. He got the candles lit and Rose petals everywhere and you’re like, Hey baby, and you’ll whip out your phone and say, look at this video is Sean Spicer I had for you. That’s pretty good, huh? Yeah. No, no money on the planet wants a lovely, sexy message from Sean Spicer. Please for the love of God. People, if you have a loved one, do not ever give them a personalized message from Sean Spicer. And it’s not just because I don’t like Sean Spicer because of the damage he did to the reputation of the white house or anything like that. It’s the fact that Sean Spicer right now with his cutesy little thing is trying to rehabilitate his image. You know, just like Rick Perry back in the day when he went on dancing with the stars, just like Sean Spicer, these people think that they can get away with all the damage they cause to this country and they absolutely can’t. But if you decide that you are going to hire Sean Spicer to tell your significant other that you love them, then you are actually helping to rehabilitate this liars image.