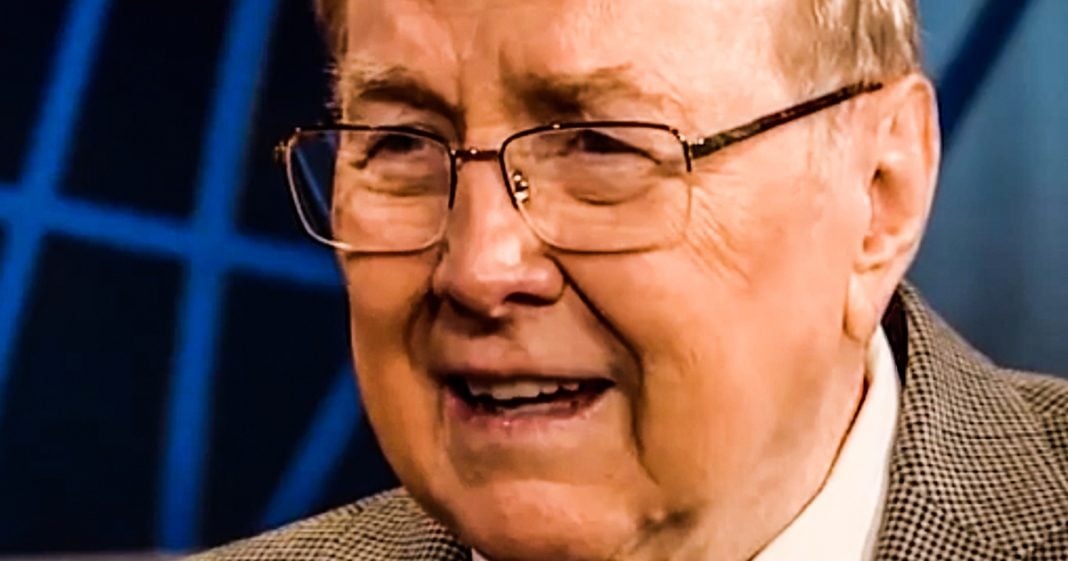 During a prayer call earlier this month, Focus on the Family founder James Dobson bragged about the fact that there are “godly” people working behind the scenes to help push conservative judicial nominees for Donald Trump. Dobson is giddy over the fact that the Judicial Branch of government has been destroyed by Donald Trump because he believes this means that Republicans will finally win the culture wars that they started decades ago. Ring of Fire’s Farron Cousins explains what’s happening.

Earlier this month Focus on the Family. James Dobson joined a monthly prayer call with intercessors for America where Dobson actually praised Donald Trump’s efforts to destroy the judicial branch of the federal government. Although of course, Dobson doesn’t think it’s destroying the judicial branch. He thinks it’s restoring it to some kind of former glory that I guess Dobson thinks that it has during this phone call. Dobson specifically praise the quote, godly people behind the scenes who were feeding Donald Trump these nominees, and we know who those people are. It’s people like Mitch McConnell, people like Lindsey Graham, the Federalist Society and other right wing think tanks funded by corporations who are feeding these right wing judges directly to Donald Trump who doesn’t know any better and just says, yeah, sure. This person, why not? As it stands right now on the district courts here in the United States, 25% of those judges have been appointed by Donald Trump.

25% of the district courts are made up of Trump appointees, and here we have this right wing evangelical pastor bragging about that specifically said they’re literally changing the nature of the judiciary. Now. That’s something we have said plenty of times here except we say it as a warning. They’re literally changing the nature of the judiciary. Whereas Jame Dobson comes out and says they’re literally changing the nature of the judiciary and the reason Dobson is happy about it is because these right wing judges that Trump is appointing left and right and nobody’s really paying that much attention to, they would finally win the culture Wars for the Republican party. We’re talking about anti LGBTQ judges taking the bench. We’re talking about judges who believe that marriage is only between a man and a woman. Judges who believed that Christians are a persecuted minority even though they’re not.

These are judges who will side with corporations at every given opportunity and that’s the thing we all have to realize about these judges that Donald Trump is putting in place. It’s not just the culture war issues. That’s what the media will focus on with these judges and they are important. Yes, this is a issue of equality. This is an issue of treating every human being like they are the same. These right-wing judges don’t want to do that, but they also want to allow corporations to poison our rivers and our streams and our drinking water. As it stands right now, according to the latest reports, there isn’t a single person in this country that has tap water going into their house that is not contaminated with cancer causing chemicals at dangerous levels, not one single person. Those are issues American citizens don’t even realize are happening because they’re not reading these reports.

They’re not following these judicial appointees that Trump is putting into place, and here we have religious frauds like James Dobson telling us that this is a good thing, telling his followers that they need to pray for the judiciary, pray for this branch of government, pray that we get these religious people who believe what we believe on the benches and so far they have been hugely successful with it. A lot of the damage that Trump has done can be undone. A lot of it can be undone by executive order, by the next democratic president, but these judges is, nothing can be done about that. Not a single thing. They’re there for life. Jeez, you’re doing impeach a president than it is to impeach a judge. So good luck getting rid of these people. If they don’t explicitly break the law, then it doesn’t matter how many bigoted or horrible pro corporate rulings they put out, they’re going to be there for the rest of their lives. And that is why people like James Dobson are willing to overlook all of Donald Trump’s moral failings because ultimately he’s still just pushing the conservative agenda.