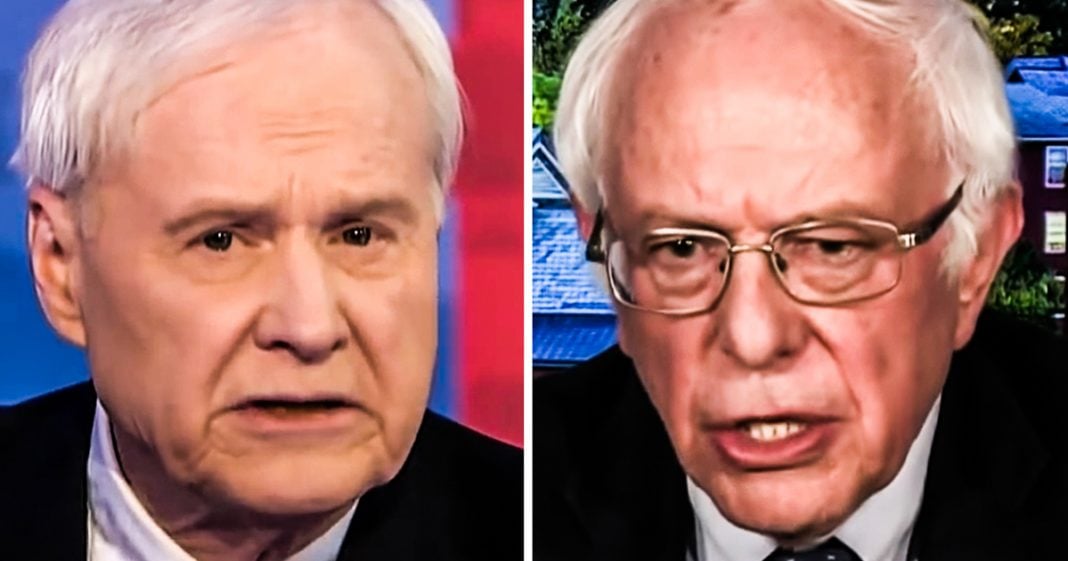 MSNBC has become a tool of the establishment wing of the Democratic Party. Their disdain for Bernie Sanders has been on full display for months, but once Bernie started winning the primary, they absolutely lost their minds. MSNBC hosts have been twisting themselves into knots trying to claim that Bernie’s victories are meaningless, and that he’s not the frontrunner in spite of all the data saying the opposite. Ring of Fire’s Farron Cousins explains why they are freaking out.

Earlier this week, the New Republic put out an article that was simply title, titled Bernie Sanders has an MSNBC problem, and then after this article was published, Bernie Sanders’ MSNBC problem only seemed to get worse. Last night on Hardball with Chris Matthews on MSNBC, Chris Matthews put up this graphic right here. I mean, you see those numbers? Oh my God. If you were to combine all of the other people running, then they got more votes than Bernie, so obviously, Bernie’s, yeah, whatever. He’s a loser. He won, but he’s somehow a loser because if you added up all of the scores, I guess from all of the other losers, then Bernie Sanders would lose somehow. But I know Chris Matthews is an older fella. I know this isn’t his first election. He knows that that’s not how it works. You don’t get to add up all of the vote tallies from all of the losing candidates and then say, well, these numbers are, of course they’re going to be more. I mean, Bernie Sanders got 26% in New Hampshire.

That means 74% of people didn’t vote for him. 74 is bigger than the 26 but that’s not how that works because that 74 was split amongst a bunch of different candidates and watered down to the fact that Bernie Sanders ended up winning with his 26% and I wish it ended with Chris Matthews, but nope. Yesterday again, after this article was published, you had Chuck Todd over at MSNBC arguing with a guest who said that Bernie Sanders is the front runner and Chuck Todd said, is he the front runner? I mean, look at the turnout in New Hampshire and it was a little bit lower than it was in 2016 and then if you take the combined, he’s doing the same thing. MSNBC is twisting itself into knots trying to convince themselves and their viewers what few are left that Bernie Sanders is somehow not the front runner. That Bernie Sanders victories are somehow insignificant or that somehow his victories are actually losses.

The saddest thing to me about this entire story is that there’s people working at MSNBC, there’s some of these guests who were people that I once respected, people that I once looked up to, some of them people who I used to work with through Air America. I don’t know what’s happened to these people, but they’re not the same humans that they were 10 years ago, 15 years ago, or even 5 years ago. Something happened to them along the way, and I think we all know what it is. Money, it’s money. It’s the money. It’s the corporations pulling the strings at MSNBC that have absolutely destroyed that network. This is no longer the network that would have allowed a guy like Phil Donahue to go on there and say that the Iraq war was immoral. Oops, I’m sorry. They fired him for saying that at MSNBC. It’s the same network that fired the one pro Bernie host they had, and that was Ed Schultz back in 2015.

This network, I guess hasn’t changed. They’re just not hiding it anymore. Kind of like Donald Trump with the Republican party. They all believe what he says, but now it’s just happening out in the open. They’ve dropped the veil. We don’t care. And that’s MSNBC’s new deal. They’re supporting a guy like Michael Bloomberg bringing on people like Dr. Jason Johnson who blocked me on Twitter by the way, because I had joked about him using the same insult for everyone who went after him. I didn’t even go after him. I just made fun of him for using the same insult, blocked me. But anyway, Dr. Jason Johnson out there trying to tell us that Bernie Sanders is an oligarch, just like Michael Bloomberg. Bernie Sanders has a net worth of about $2 million. While Bloomberg has a net worth of about $250 billion and Bloomberg is the only one trying to use his own money to buy the office of the presidency. I think there’s a clear distinction between those, Dr. Jason Johnson.

You had Joy-Ann Reid just a few weeks ago, bring out her quack body language expert to try to tell us that Bernie Sanders was lying during his exchange with Elizabeth Warren in the pre Iowa debate. Chuck Todd, again, still trying to say that he’s not the front runner, even though not only has he won the first two contests in terms of the popular vote, but he also is the front runner in literally every single poll right now. So I don’t know what metric Chuck Todd needs in addition to all of that, but by every possible metric, Bernie Sanders is in fact the front runner, and that terrifies the people at MSNBC because it terrifies their corporate masters. And I’m sorry, but I’m going to have to call somebody else out here right now. Going back to Joy-Ann Reid and her little body language expert that she got absolutely demolished for online because she, that woman she brought on was such a quack. Here’s the thing, it comes down to the producers of that program, right? Unfortunately, some of the producers on Joy-Ann Reid’s show, people that I know, people that have come down here used our studio in Pensacola because they also used to work for Ed Schultz.

They were good friends with Ed Schultz, and I’m gonna call them out right now. Y’all know better. Y’all know better than to do crap like that. You definitely have changed and yeah, I’m talking to people like James Holm producer for Joy-Ann Reid. Used to be Ed Schultz’s producer for years before he even had a television show. He and Ed were, were best buds, shared the same views and then somehow after he gets switched over to Joy-Ann Reid’s show, after Ed Schultz was fired from the network, he’s turned into this and he’s allowing this to happen. James, I don’t know what happened to you, man. I don’t even know if you’re going to see this, but you need to go back to your roots. You need to look at yourself in the mirror and say, is this the kind of person I truly want to be? Because that’s not the person I used to know. You need to figure that out bud, because this is disgusting. What your network is doing to Bernie Sanders is disgusting and it’s unfair. And before you think, I’m just picking out a few people to, you know, call out on MSNBC. Let’s look at the facts. In These Times did a report recently where they analyzed the coverage from MSNBC over the past few months and determined that not only did Bernie Sanders get the least amount of coverage, he also got the most negative coverage.

We have statistics showing that MSNBC is doing whatever they can to discredit Bernie Sanders. We have clips from the hosts. We have their graphics. We have everything that proves what we are saying here. This is not a conspiracy. This is not some angry Bernie bro sitting here mad that MSNBC isn’t playing nice. The only thing I’m mad about is that people still think MSNBC is a legitimate liberal network. It is owned by Comcast. It is a corporate media outlet that will do whatever it has to, to prevent somebody like Bernie Sanders from becoming president of the United States, breaking up their media monopoly and making their executives pay a little bit more in taxes. That is what terrifies MSNBC.