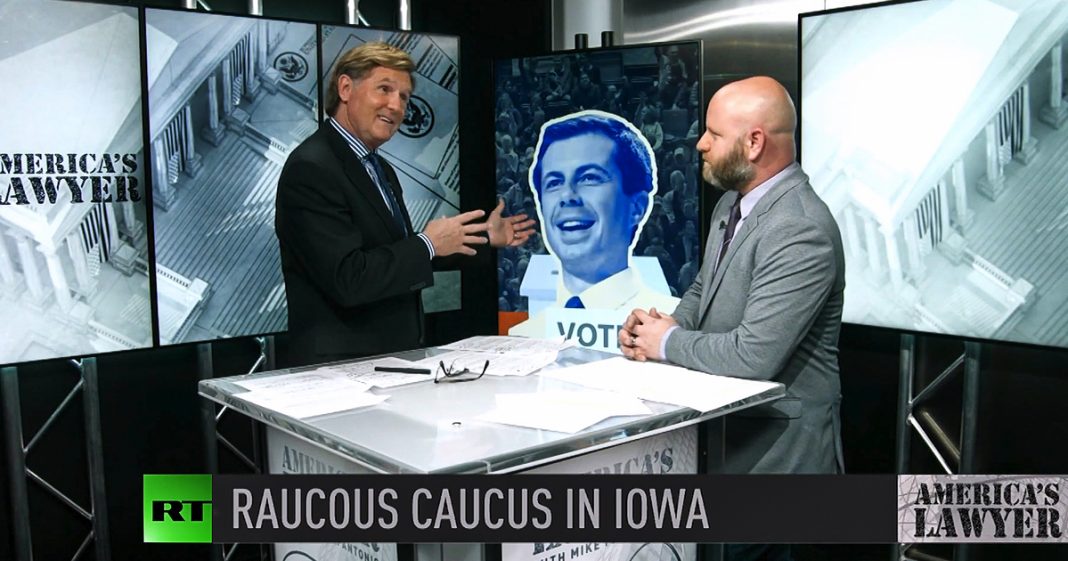 Via America’s Lawyer: Mike Papantonio and Trial Lawyer Magazine editor Farron Cousins take us through the calamitous events of the Iowa Caucus. With aggressive calls for re-canvassing, a bug-ridden reporting app, and the Democratic winner of the primary STILL being disputed a week after polls closing, what does this mean for the Dems moving forward?

Mike Papantonio:             We still don’t have an official winner of the last week’s Democratic caucus in Iowa and some folks believe that this was the plan all along. Joining me to talk about that is Farron Cousins from the trial lawyer magazine. Farron, God knows, don’t you remember doing these stories in the last Hillary election? It was like, what? Can you pull it together, lay this story out? I mean, everybody’s heard bits and pieces. I don’t think they understand how crazy this story is.

Farron Cousins:                  Right, you know, we, we wait for months. They spend millions and millions of dollars in Iowa. Everybody gets sick of Iowa. We hope it’s over last week and then no, suddenly this thing is still going on. I mean, we, we got about 99%, I guess of the, the votes in. Bernie Sanders up by about 6,000 votes. Somehow Buttigieg ends up with more delegates, even though he did not get the most votes. But what we saw was exactly what a lot of people, a lot of Progressive’s have feared over the last few years and that is that the DNC still hasn’t gotten their act together. And they don’t even know how to conduct a pro, a caucus properly, at this point.

Mike Papantonio:             Okay. They, they, they changed the polling places at the last minute. They don’t have an electronic system that can even count the votes. The people that want to vote, the phone lines are, are all jammed up. This is a system that was given and it was supposed to be the system that was going to solve the problem. I mean, if you, if you think about it, they’ve had a system in place that’s worked really well for a long time.

Mike Papantonio:             And, and, what’s it called the, I think it’s called the salzer system. The salzer system has worked in these primaries forever. It’s, it’s foolproof, basically a foolproof system. But you got, you know, mayor Pete comes in and says, hey, I don’t like that system. We want to use this system that was put together by who?

Farron Cousins:                  You got Robby Mook and a couple other holdovers from Hillary Clinton’s campaign. And see that’s the thing too is this whole thing really does wreak of some kind of conspiracy.

Farron Cousins:                  When you look at all the pieces of it. I mean, you did have Pete’s campaign that has made payments to this group that, that created the app that crashed and then delayed the results for all these days. So that’s a little suspicious. You know, again, all the Hillary people created this thing, they somehow get this contract to do it. That’s suspicious. Pete has the gold standard poll the day before the caucus buried because he didn’t like the results.

Mike Papantonio:             Yeah, the list on what went wrong. This is a great list. First of all, the gold standard poll, as you call it, it’s a, it’s a standard that’s been used forever. It’s a salzer polling system and it works. Last minute caucus changes, they change the location. People don’t even know where they’re supposed to go. They’re running around like a bunch of chickens with their head cut off. The faulty results that are showing, that are actually changing the numbers in precinct by precinct, lowering the precinct numbers beyond what they should be lowered. And when they did the recount, they said, yeah, they’re way off. It wasn’t just mild that they’re off. They’re way off. The, the fake declaration of victory that CNN runs with. Oh, you know, we got mayor Pete, he won. And what did they do? They take Bernie Sanders and make him look like he’s a loser, don’t they?

Farron Cousins:                  Right. And as it turns out, as we mentioned, Bernie Sanders got the most votes. He effectively won Iowa. He was robbed of the opportunity to go out and give that big post Iowa victory speech, which we have seen all the candidates always do, Democrat and Republican alike, and that’s a big deal.

Farron Cousins:                  That victory speech after Iowa gives people so much momentum. They took that away from him and that can’t necessarily be recovered. Pete declared victory even before we knew how screwed up things were before we knew we didn’t get results. That’s even more suspicious.