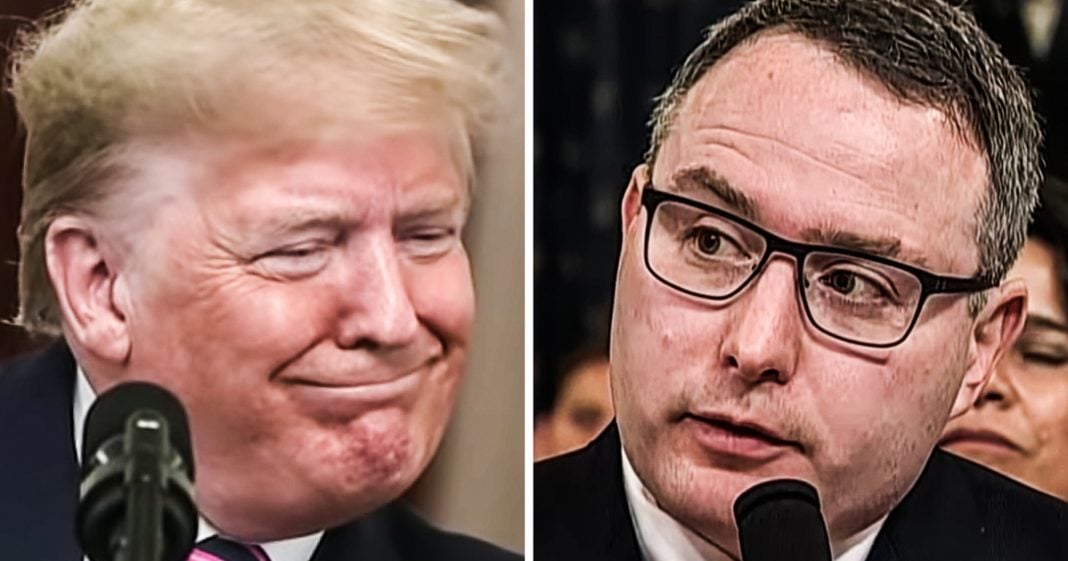 Donald Trump has suggested that U.S. Army Lt. Col. Alexander Vindman should be “handled” by the Pentagon because he had the audacity to testify at the impeachment hearings in the House. Vindman said that he was concerned about the nature of Trump’s call with the Ukrainian president, and that was enough to set Trump on a path of revenge against Vindman and likely everyone else who testified. Ring of Fire’s Farron Cousins explains what’s happening.

Donald Trump has grown increasingly more and more dangerous in the week since the Senate voted to acquit him in their sham impeachment trial. We saw on Friday he had Lieutenant Colonel Alexander Vindman pulled from his office and uh, relocated to a different office, a different branch within the federal government and the military. And then after that, Donald Trump actually suggested that the Pentagon should somehow punish Vindman because Vindman, as we all know, testified in the house Democrats impeachment hearings both publicly and behind closed doors. Now in the testimony, and talk about that before we get to the, a potential punishment for this man. In the testimony that he was a national security council, Ukraine expert, he said he didn’t feel it was appropriate for the president to make these requests to the Ukrainian president. You know, the call left him a little uneasy. He didn’t outright say the president committed a crime.

He didn’t say the president should be removed from office or that he’s a dangerous man. He just said, I was concerned about this. You know, D didn’t sit well with me, wasn’t sure what was happening, not typical things that we see. And that was about it. Right. So then Friday Trump has him dragged out of his office and then tells the media the following we’re going to have to see, and this was in response to, is the military going to do something to them? Are they going to punish him? Are they going to retaliate against him? And Trump said, we’re going to have to see. But if you look at what happened, they’re going to certainly, I would imagine they’re going to take a look at that. He is over with the military. We sit him on his way to a much different location and the military can handle him any way they want. Now that definitely sounds like a tacit, a wink and a nod. Go ahead and handle him any way you want. Kind of reminiscent of a few good men, right?

Except we don’t have any good men at this point in the Trump administration, but that is exactly what Donald Trump wants to do. He wants this man to be punished along with Gordon Sondland because they had the audacity to go in front of the house of representatives and say, I don’t feel right about what Trump did. They didn’t even say, yeah, the dude committed a crime. The guy should be removed from office. He should be thrown into in jail. They just said, I wasn’t comfortable with this. That’s it. That, that, that was the most damning thing from their testimonies is that I didn’t like it. It’s what you say to do a bad meal at a restaurant. I didn’t like it. You’re not advocating for the restaurant to be shut down or burned to the ground. You just said, Hey, uh, I had a thing. I a fan of it here, but even that in the mind of Trump is dangerous and those people have to be punished and they have been, they have been stripped of their positions. They have effectively been demoted and God only knows what’s going to happen to these people now.

Then that’s what happens when you go against Trump. Now contrast that with what’s happening right now with Roger Stone guy who’s about to be sentenced for lying to Congress, witness tampering, obstruction of justice, all of these things he was convicted of and you had prosecutors from the department of justice go in and say, we recommend seven and nine years for this guy Trump. God. Furious tweeted out how angry he was about this bill BARR steps in says, we’re going to request a reduced sentence, not seven to nine years as our prosecutors argued. We’re going to go for something a lot less than that. Then you had all four of the prosecutors on that case resign in mass gone now because bill BARR is just sitting there waiting to do Donald Trump’s bidding because he doesn’t want to be punished like sawn Linder Vineland. He wants to be rewarded like Roger Stone is going to be, and that’s what’s happening right now with this administration. You say a single thing that Donald Trump doesn’t like. Your political career is over.

You do whatever Donald Trump tells you and you’d be a loyal little lapdog and you’re going to get a treat somewhere along the line. That’s what this administration is all about because that is what Donald Trump personally is all about. People are paying a price right now for doing nothing more than speaking up and saying, I wasn’t comfortable with what the president did and their careers could likely be over because they had enough courage to stand up to Donald Trump.