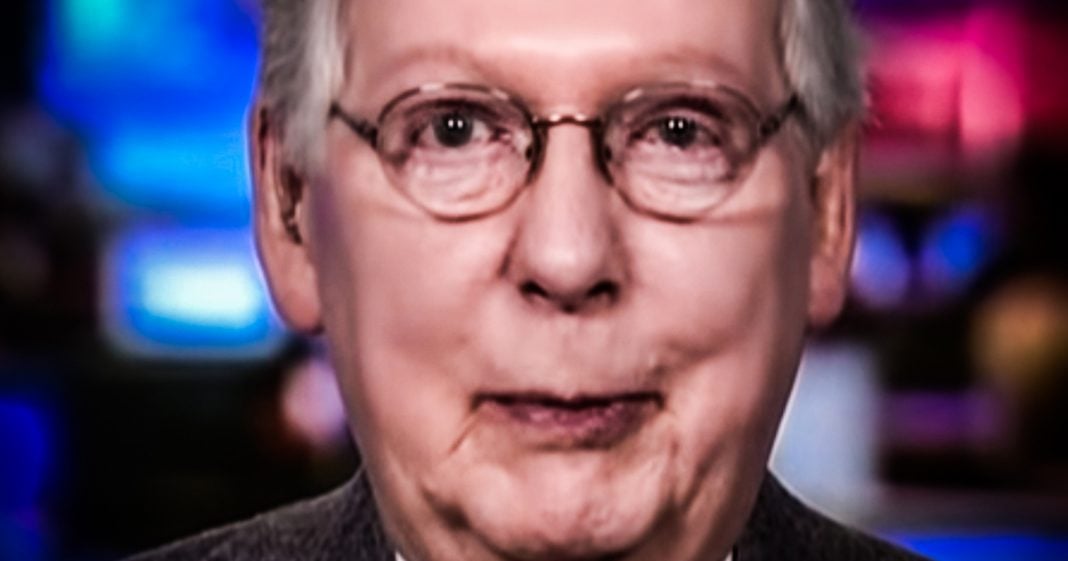 On Tuesday, Republicans in the Senate managed to block three separate election security bills brought by Democrats, breaking a new record for showing their complete disdain for the safety of our elections. Mitch McConnell wants outside interference – whether it is from a foreign country or a hacker in the U.S. – because it always seems to benefit the Republicans. Ring of Fire’s Farron Cousins discusses this.

Yesterday in the Senate, Democrats attempted to pass three election security bills, three bills, one package through some, you know, obscure Senate rule where they’re allowed to bring all three at once if they get a unanimous vote on it, blah, blah, blah. But Senator Republican, Senator Marsha Blackburn, blocked all three. Marsha Blackburn from Tennessee single handedly destroyed three bills that would have helped protect our elections as we head into the 2020 election, two of the bills were focused on reporting the, uh, influence of foreign countries on our election, which to kind of put it in a nutshell a little bit. Basically what these bills would have done was that if somebody had an offer of foreign election interference, it’s set up the channels for them to report this. And then the, uh, efforts to stop it. Marshall Blackburn said, Oh, heck no, we ain’t doing that. And then the third one, one of the big things it included was that it wouldn’t have allowed voting machines, electronic voting machines from being hooked up to the internet.

And Blackburn again on that one said, nah, not happening. Hook them up to the internet. What’s the worst that could happen? Right. And her reasoning for it shows that Marsha Blackburn is apparently one of the dumbest sitting senators in this country. Uh, she said we’re not going to vote for these because the Democrats are only putting them up there so that we will vote against them or they know we’ll vote against him. I think she said, because they know we’ll vote against them and then they’re just gonna use it for their campaigns. Okay. Marsha. Um, I don’t know if you understand, but that’s not a reason to not vote for a bill. You, you didn’t offer any substance as to why you didn’t like these bills. Were they too expensive? I did. They not go far enough? Did they go too far? No. You can’t just say I’m voting against it because they want me to vote against it because they’re going to use it for their campaigns.

That that’s not a thing. That’s not a thing that happens folks. But that is what every Republican does. That is what Mitch McConnell has done on plenty of occasions. McConnell has walked into that Senate and said, I’m not going to do it. We’re not going to vote on these. You can’t bring them to the floor because Republicans are the ones who benefit from election interference every time. You point to me a single election in the last 20 years where we have seen some kind of screw up that somehow benefited Democrats. The voter purges aren’t benefiting Democrats, you know, matching their names with a felon and then disenfranchising them. That’s not helping Democrats. Voter laws aren’t helping Democrats. All the voting machines that we have seen, videos of switching votes, they’re not switching from Republican to Democrat. They’re switching them from Democrat to Republican. That’s why McConnell blocks these things. He’s blocked 10 Marshall Blackburn yesterday added to the total. She blocked three and heck yeah, the Democrats need to use these as campaign talking points. If we do not have secure elections here in the United States, then we don’t even have a country anymore that we can trust.