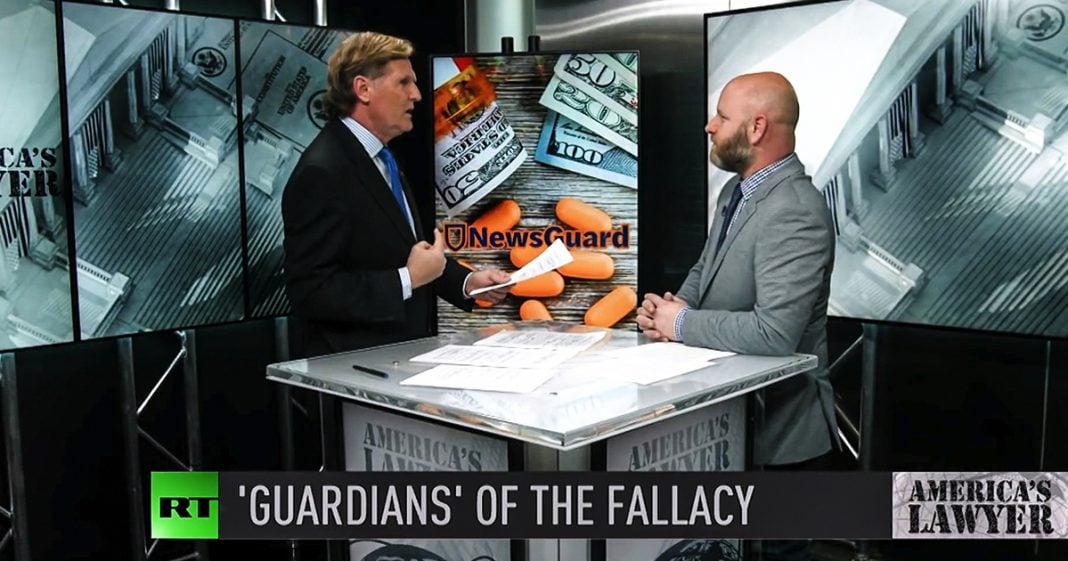 Via America’s Lawyer: A new company called NewsGuard claims to be able to protect audiences from ‘fake news,’ while being funded by pharmaceutical companies. Plus, “Pharma Bro” Martin Shkreli is again facing accusations of predatory price-fixing, this time for his patented drug Daraprim, which is used to prevent malaria. Mike Papantonio and Farron Cousins discuss.

Mike Papantonio:             A new company called NewsGuard says that they can protect you from fake news, but the corporations funding that group have real different motives. This is an amazing story. Lay it out for us. I mean, this is such an extraordinary story. I go, really? This is happening in 2020. Go ahead.

Farron Cousins:                  Decides he wants to help fight fake news, you know, very noble cause. And so he says, well, in order to fight fake news and create NewsGuard, I’m going to need some money. So he goes to this group called Publicis Groupe, and it turns out that Publicis Groupe is funded in part, a lot of their money, billions of dollars is coming from healthcare companies, from pharmaceutical companies. The very companies that control the corporate media have now paid in a couple million dollars to help Mr Brill found this NewsGuard app plugin, I guess for your, for your browser, that’s now going to tell you when you go to a website, oh, NewsGuard says this is fake. Or NewsGuard says this is a green light, we approve of what’s on this site.

Mike Papantonio:             Okay. Let me comment two things about what you just said. Brill has always been a corporate lawyer. He’s never done anything for consumers. I mean, really he, whatever he wants to sell, the guy is center of corporate America. These are the people that Mr Brill and this company went to to try to get funding for this. Follow me. Eli Lilly, Abbott, Roche, AstraZeneca, GlaxoSmithKline, I mean, it’s, it’s a lineup of the worst offenders of defective pharmaceuticals in the country. Now, what is going to happen is when we do a story like this, if you were to go to NewsGuard, right, NewsGuard would tell you don’t go to that site because they’re telling stories that are fake news. This is not fake news. This is absolutely, fortunately, you had a great writer that, that handle, that’s handling this, this story who’s done all the investigation. And he says, look, if you believe this, if you believe the ratings that NewsGuard gives, then you’re kidding yourselves into under, you’re kidding yourselves about the truth of the matter.

Mike Papantonio:             Yeah. If it’s not corporate, if it’s not pro pharmaceutical, if it’s not pro, pro chemical, if it’s not pro Wall Street, then it’s fake news. Now what about the idiot who says, yeah, I’m going to use this? What about the idiot who says, I’m gonna use Snopes? Snopes is the same thing. You’ve got some cat with a clear agenda that’s saying, don’t go to this site because they’re not telling the truth. No, it’s don’t go to this site because they’re saying things that are scaring the bejesus out of us because the corporate backing on this is deplorable. So if you want to believe Pfizer or you want to believe an independent source, they’re saying, oh, you can believe Pfizer, Dow Chemical, DuPont, Boeing, McDonnell Douglas. You can believe them, don’t, but don’t believe that site.

Farron Cousins:                  I, I think that that’s, that’s inaccurate what he said about them. But with the NewsGuard, this is absolutely, the funding has been traced. You see it in the documents. This group got money from a group that gets their money from these healthcare industries.

Mike Papantonio:             Yeah, which hasn’t been proven by Snopes. But who wants a organization like Snopes making that decision for you, right?

Mike Papantonio:             The pharma bro Martin Shkreli has been accused of price fixing in a new lawsuit. Farron, what’s the new lawsuit about? You know, this guy’s always in the news about doing awful things. That’s how we can know that, that it’s big story.

Farron Cousins:                  He truly is. And, you know, Shkreli is currently serving time in prison for fraud and a lot of people don’t realize that. They think he actually went to jail for, you know, increasing the drug price a couple hundred thousand or a thousand percent in a single day. He’s in prison right now for securities fraud. He ripped off wealthy people. But this new lawsuit from the FEC and the New York attorney general says, okay, we, we actually finally looked into your Daraprim price increase and we think we’ve got a price fixing case against you because you locked out the generic. You refused to let them come to market. That’s what this lawsuit is saying.

Farron Cousins:                  Well, exactly. That’s, that’s the punchline of all of this is that yeah, Shkreli’s a bad, bad person, but Shkreli, aside from the securities fraud hasn’t done a single thing that every other drug company in this country doesn’t do on a regular basis.

Mike Papantonio:             Okay. We’ve done so many stories on price, price fixing, where I don’t care what the company is, whether you’re talking about Merck, whether you’re talking about Johnson and Johnson, all of them, their, their price gouging is uncontrollable. Now we had a chance to do something about it, if you’ll remember last, well I guess it was during the Obama administration where we were going to make it to where we could import from places like Canada. Right?

Mike Papantonio:             And then Cory Booker led the charge against that. And so we’re stuck with the same kind of, what is it, you’ve seen, you’ve seen situations of 10000% markup on some of these drugs, right?

Farron Cousins:                  Right, right. The Daraprim, and again though, actually just at the beginning of this year, so we’re talking four and a half weeks ago, you had every major drug company go ahead and announce their price hikes for 2020. There was no reason to do this. Some of these drugs had been on the market for 25 or more years. They just wanted to make more money off it, and that’s what Shkreli did. It’s dirty. It’s deceitful, but.

Farron Cousins:                  He came in with lots of money, bought a company, said I’m going to do what everybody else is doing, and he gets popped for it. Meanwhile, your CEOs of Pfizer and Merck and Eli Lilly, they’re still going out.