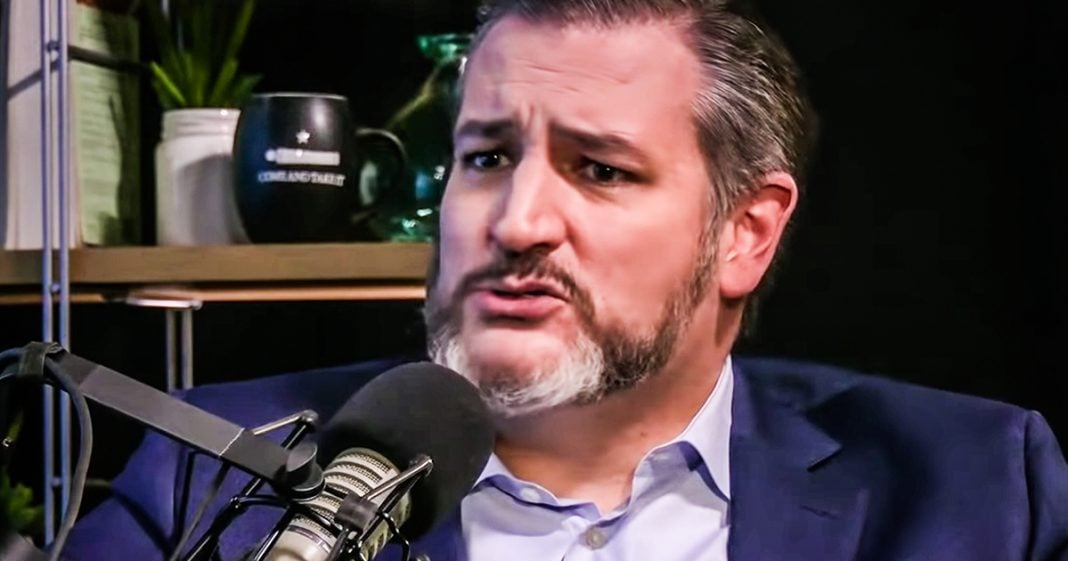 Ted Cruz is terrified that Bernie Sanders might become the next President of the United States, but not just because that’ll mean that his wealthy donors will have to pay more in taxes. He’s worried because he believes that Sanders will somehow get Cruz’s podcast cancelled because he wants to rein in Big Tech companies. He didn’t specify how those two things are related, so Ring of Fire’s Farron Cousins attempts to explain what Lyin’ Ted meant.

If anybody is on the fence as to who they want to support in the democratic primary. Let me go ahead and throw this idea out to you. According to Ted Cruz, if Bernie Sanders becomes the next president of the United States, Ted Cruz, his podcast is going to be canceled. So if you want to get Ted Cruz off the air, Bernie Sanders might just be your candidate. Now, that sounds absurd, right? That’s just the rantings of a crazy person. Well, you’re right, but unfortunately, that is exactly what Ted Cruz said earlier this week on his podcast called The Verdict. Cruz said the following, he said, as bad as big tech is now in a democratic administration and a Bernie Sanders administration, they would, I’m not exaggerating when I say this podcast could very well be off the air.

Now, what Ted Cruz is referring to is obviously the effort by Bernie sander or the proposal, I guess, by Bernie Sanders, to rein in the tech giants, drain them in a little bit. They’re all getting too big. You know, we’ve got a lot of, uh, antitrust issues happening, monopoly issues happening. You know, they’re being dishonest, they’re being sued, left and right for all kinds of labor violations. Uh, job, uh, labor law violations, racial discriminations, these tech giants are pretty dang bad when you look behind the surface of, Oh, I like getting on Facebook and Twitter. No, they’re all being sued for some pretty serious things.

And Bernie Sanders says we need to do something about them so that we don’t have to do it through lawsuits, break them up a bit, make them smaller. They’ll still be profitable billion dollar organizations, but they’re not going to have so much power consolidated in the one entity. And somehow Ted Cruz took that idea as meaning we’re going to get rid of conservative podcasts. Bernie Sanders has said nothing. None of the democratic candidates, uh, for the record have said anything about censoring or silencing conservative media. And what’s really interesting about this is it Ted Cruz has been one of the loudest and whiniest voices yelling about conservatives allegedly being shadow banned and censored on social media. And now here he is. Bernie Sanders comes in. Well, Hey, I’m going to make sure that doesn’t happen. And Ted Cruz thinks that means he’s going to lose his show.

This is nuts, Ted. Ted Cruz is nuts because that’s not at all what’s going to happen, but it does show you the hypocrisy of the Republicans here, right? They have been whining and crying for two straight years claiming that these social media giants, the big tech giants are somehow harming them. And then when somebody comes in and says, okay, well I’m going to fix it, they say, no, that’s going to hurt me.

I love tech giants. They’re my best friends. You can’t have it both ways, Ted. Either they’re really bad now, which you say they are and should be changed or keep your stupid mouth shut and just keep doing your stupid little podcast. Those are your options at this point, Ted, but stop lying about what Bernie Sanders is going to do or wants to do as president of the United States. But I understand the reason you’re saying that you want to scare conservatives because you know a lot of them are attracted to those ideas that Progressive’s have. You know, Medicare for all debt free college, even green, new deal. They love those. So you got to come up with a new way to get them to not go over and vote for the Democrats. And the only way Republicans know how to do that is through fear.