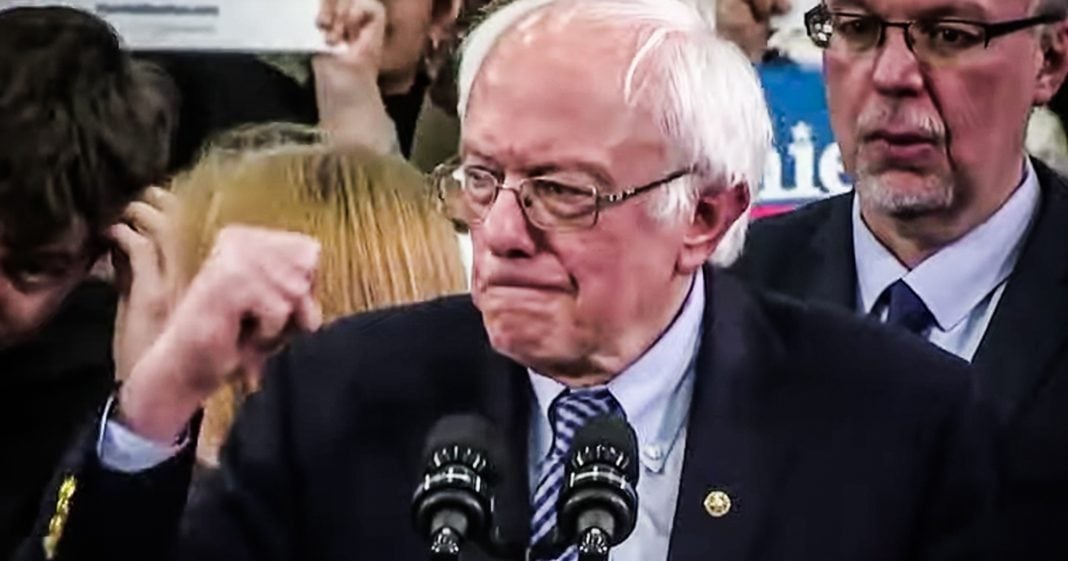 Bernie Sanders has won the New Hampshire primary, but that was expected. So expected, in fact, that the media is acting like he either didn’t win by a large enough margin, or that coming in 2nd or 3rd is a better thing. But one thing is for certain – Elizabeth Warren and Joe Biden’s campaigns are not doing well, and if they don’t secure a victory soon it will be over for them. Ring of Fire’s Farron Cousins discusses this.

Well voting in New Hampshire is officially over and unlike an Iowa the next day, we actually have a winner. We had a winner yesterday evening, and that winner is Bernie Sanders who beat out Pete Buttigieg by a little under two percentage points with 99% of the precincts reporting. Now, the media has been quick to point out that, Oh my God, Bernie Sanders won this state with 60% of the vote in 2016 and now he barely wins with less than 2% Oh man, he is finished. Somehow. Bernie Sanders winning in New Hampshire, the corporate media, which is MSNBC and CNN and New York times have all tried to spin this as, wow, he won. What a loser. Look at how little he won by. Can you imagine that? Oh my God, this guy’s career is finished, isn’t it? I mean, he won the most votes in Iowa. He won the most votes in New Hampshire. Wow.

What an asshole. Right? No, Bernie Sanders won. And the reason the percentages are a little bit different than they were in 2016 is because there’s more than two people running right now. You know, it’s like if you have a pie and you’re going to split that between two people, you would each get more pie. If you have to split that pie with 10 people, everybody’s going to get a little bit less, aren’t they? And that’s what happened in New Hampshire. Simple fractions folks. We learned all this and uh, you know, elementary and middle school, right? We, we should know what happened and why the vote was not as big. But you have your corporate media twisting itself to the point they’re going to strain a muscle trying to convince us that Bernie Sanders victory was actually a loss for him. The two runners up Pete, Buttigieg again, little under two percentage points below Bernie Sanders, which was a good showing for mayor Pete and Amy Klobuchar came in third.

You know, the, that’s a bit of a shocker. The media is trying to spin that as she actually won it because she came in third, she outperformed the polls, as did Buttigieg. Um, but again, first place’s the winner and Klobuchar is doing better than expected. But part of the reason Klobuchar is doing a little bit better is because you have two candidates who have absolutely fallen off the map. Elizabeth Warren and Joe Biden. What happened to these campaigns? Joe Biden, obviously the man has never pulled more than for a fourth place in any primary that he has run in, in 32 years. That’s how long this guy has been running for president folks. And he’s never finished better than fourth place. And in New Hampshire yesterday he got fifth place, fifth Elizabeth Warren took fourth place. Now Elizabeth Warren gave speech after she was declared the fourth place, a winner, I guess.

Um, it was a fiery speech. It was an angry speech and she appeared to call out Bernie Sanders just kind of burning everything to the ground and really destroying any chance she may have had of becoming a vice president, a presidential candidate on a Bernie Sanders ticket. She is going scorched earth right now and I don’t know that that’s going to help her campaign. She was doing fine. She was doing great in the polls. She was doing fine, getting along with Bernie Sanders and, and there was hope of a unity ticket between the two. And then she hired a bunch of people from Kamala’s staff, bunch of people from the Clinton campaign, and suddenly she hates Bernie Sanders. And at the same time her poll numbers absolutely tank and she underperforms in the first primary in the first caucus Joe Biden. People understand the guy’s a little bit nuts. I think that’s the biggest contributor there.

There’ve been some people say no, it’s Bloomberg taking the votes away from him. I think Joe Biden’s done a good job of pushing people away. It’s not that Bloomberg is stealing them, it’s that they’re abandoning Biden because they see that he can’t win and he’s, you know, not quite all there. And so they’re like, ah, Bloomberg, not too bad. If it wasn’t Bloomberg, it’d be somebody else. So stop with the no Bloomberg stealing votes from Biden. He should stay in there. No, that’s a stupid argument. Don’t make that argument. It’s not smart. Here’s the interesting thing. Things are going to change. There’s going to change very quickly now because we just got done with two very, very white States voting. Next two States we have Nevada and South Carolina demographics are a little bit different, a little better representative of what the rest of the country looks like.

So our Buttigieg and Klobuchar who are pulling the worst among minority candidates, still going to be able to pull out second and third place. Is Joe Biden going to be back in fourth place with these States among groups that he typically does well with or at least poles well with now and if Bernie Sanders can run away with both Nevada and South Carolina, is that it? One of the biggest criticisms the Bernie Sanders campaign has faced most of it based on a fantasy, because polls show he has the most support, but either way, people have said he can’t win over minority voters show. He goes to Nevada and he goes to South Carolina and he pulls out first place. I think that kind of seals the deal. I know that’s only four States out of a, you know, 55 total contests, but I think it’s going to shut up a lot of the hate. No, I take that back. It’s not going to shut up. The haters, they’re never going to shut up. Their financial interests rests on Bernie Sanders not winning. So of course, no, they’re not going to shut up, but it’s going to convince more people in this country that know what Bernie can win among all demographics. Bernie is the front runner and Bernie beats Trump.

Two contests to go before we get a very real clear picture as to what’s going to happen with the rest of the race. Iowa, New Hampshire, the first two contests are big. Obviously there is not been a single person that won both of those States that did not go on to become the democratic nominee in modern history. So if past is prologue, Bernie already has this thing in the bag. Of course, you never know what’s going to happen. Things are a little crazy. We have a lot of candidates still in the race. Time will tell, but that time is coming up pretty darn quick.