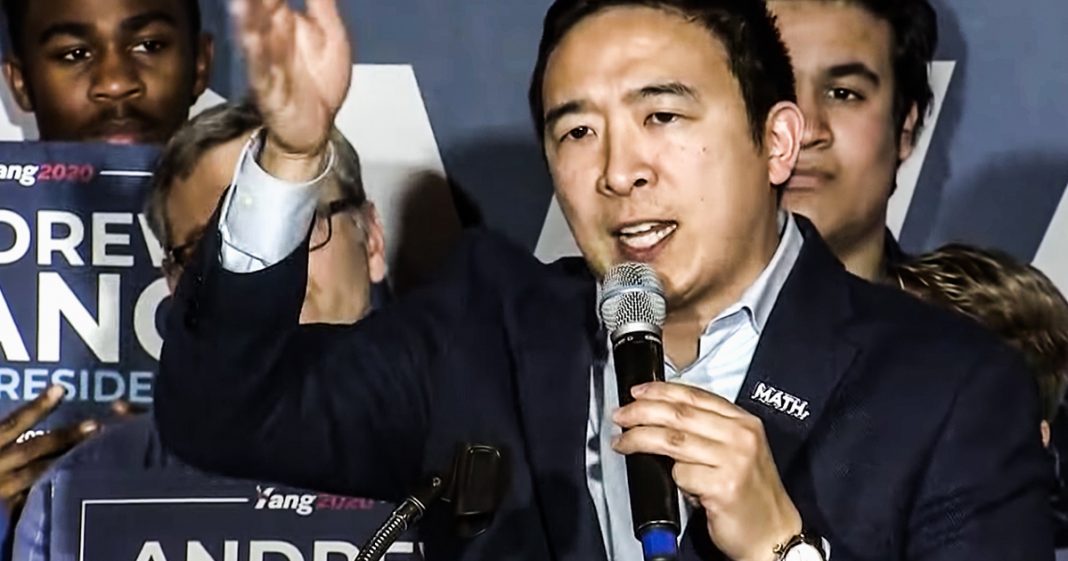 Andrew Yang announced Tuesday evening that he was suspending his presidential campaign, which means that it is over for the Yang Gang. But Yang brought some fresh ideas into the primary, and his supporters are numerous and loyal – could they possibly jump over to Bernie Sanders? Ring of Fire’s Farron Cousins explains what this could mean.

Bit of sad news yesterday after the votes started rolling in, we started getting some totals from the state of New Hampshire. A big favorite for a lot of people in this country dropped out of the presidential race. And that was Michael Bennett. Um, actually, I’m kidding. Michael Bennett did drop out, but nobody cared or even remember that he was still running. He was Andrew Yang who dropped out on Tuesday as the results were coming in from New Hampshire. And here’s the thing, I have been very hard on Andrew Yang when Andrew Yang’s policies have called for it. He has said some things and proposed some things that I really didn’t agree with and that really weren’t sound. His reasoning behind some of these policies, for example, UBI, universal basic income didn’t work. Not saying UBI doesn’t work, but the way he was going to pay for it didn’t work. Uh, you know, cutting some of the other benefits that people in this country get that’s not going to work.

So I wasn’t a fan of the methods to get to the end. There been other times where I have heap praise on Andrew Yang. You know, just uh, two days ago talking about the fact that he wants term limits for judges in this country. Heck yeah, that’s a great idea. He wanted to pass a bill, making your personal data online, your personal property and any company that wants to use it has to pay you. I love that. And he’s had plenty of other proposals that I strongly support. But here’s the thing about Andrew Yang. He brought things into this campaign that people were not talking about. He brought ideas that others had not had. He was a good voice. Yes, he had a lot of libertarian leanings and those were the issues. I didn’t necessarily agree with him on, but overall, he helped push this campaign further and help bring in ideas that otherwise would not have been discussed.

He made it further than anybody thought he would. You know, this was, nobody knew who he was and he lasted longer than Cory Booker and combo Harris, you know, plenty. A Hickenlooper, plenty of these other folks. He outperformed what any of us ever expected. And he much like Sanders in 2016 had this groundswell of genuine grassroots support. And that’s important and that is something that cannot be dismissed. So the question now obviously is where does the yang gang go? If Andrew Yang is out, and again, he actually had the most, the highest number of supporters who said they would not vote for another Democrat if yang dropped out of the race. So that’s, that’s a little concerning, but it’s also a little iffy. People say things in the heat of the moment. Maybe they’ve changed their minds. A lot of it could depend on what Andrew Yang decides to do from this point forward. He says he will support eventual democratic nominee no matter what. But is he going to throw out an endorsement? I would like to think yes and I would like to think that he would pick the candidate who is the most like him. And that would be Bernie Sanders. If we bring the yang gang over to the Sanders camp, that is going to bolster Bernie Sanders in a way that people don’t even understand yet.

Yang does have millions of supporters. They may not have shown it in Iowa, New Hampshire, those are smaller States, but throughout this country, that’s a big network of people, a big network of intelligent, energized people.

Isn’t that the kind of thing we would like to bring over into the Bernie Sanders camp? I don’t think you’re going to have the gang gang saying, well he had a lot of progressive ideas, but I guess now I’m going to vote for crazy Joe Biden or racist Michael Bloomberg. I simply don’t see that happening. They’re going to go to the next candidate who has the most ideas similar to what Andrew Yang had and that would be Bernie Sanders. So yang would probably do well to come out and endorse Bernie Sanders if we truly want ideas to dominate in the 2020 election and if Bernie wins this thing, I would like to see Andrew Yang with a cabinet position because I do think he’s got a bright future here. He’s got a lot of great ideas. He’s got some other ideas, not as great but can be improved upon and I don’t think he should go away entirely. Would love to see him in a cabinet position, and I would love to see yang come out and endorse Bernie Sanders.