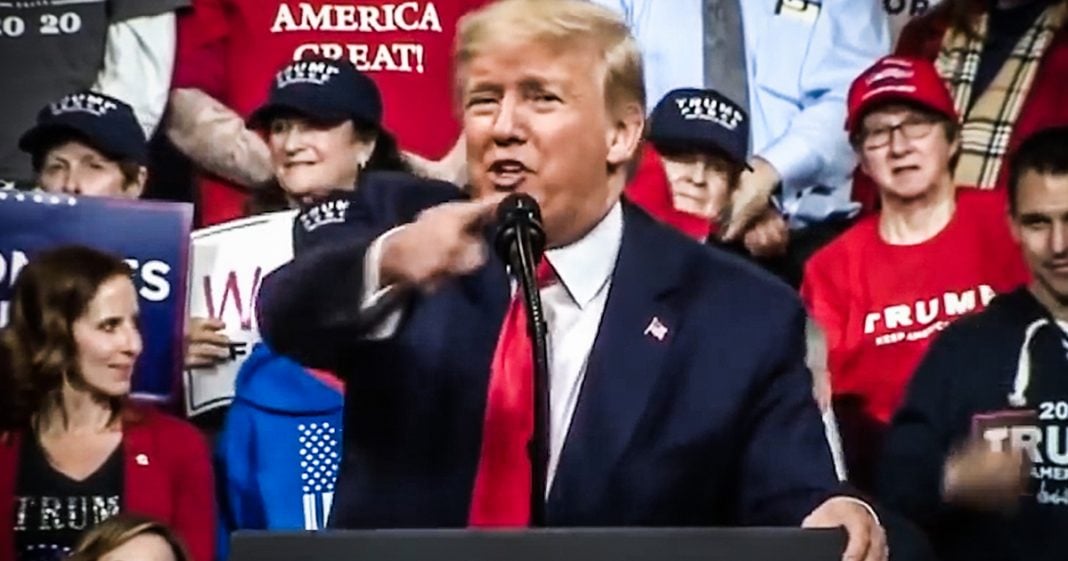 At a campaign rally in New Hampshire on Monday, Donald Trump showed just how much disdain and how little respect he has for his supporters by lying to their faces about who is paying for his border wall. Trump claimed that he’s using “redemption money” from illegal aliens to pay for the wall, but no such thing actually exists. He thinks his supporters are stupid, and if they stick with him, then he’s right. Ring of Fire’s Farron Cousins discusses this.

So yesterday Donald Trump traveled to New Hampshire because for some reason he feels the need to travel to every state that the Democrats are going to, but nonetheless goes to New Hampshire, throws a rally and shows his supporters just how stupid he thinks they are. We all know at this point that Donald Trump’s wall is being paid for with the military budget that he was able to secure by declaring a national emergency down on our Southern border. Right? That, that’s common knowledge at this point. That’s where he got the money. But that didn’t stop him from going in front of those supporters last night and lying to their faces about where that money’s coming from and in the process invented a new term. Here it is.

Yes, folks, redemption money, which nobody in the government seems to know what exactly that is because they’ve never heard of that. Donald Trump literally made up that term to have something fancy to say to those people in the crowd, and it’s not because I think they’re stupid. It’s because he thinks that they are stupid. As I mentioned, we all know where the money for the wall is coming from. It’s coming from the military budget. He had declared a national emergency for the sole purpose of being able to use those emergency funds in the military budget. There were big court battles over this and that’s where the money came from. Most of it, but I can promise you $0 of the wall fund has come from redemption money from illegal aliens. How would that even work? Right?

When we deport somebody, do we say all right, and also hand over all the cash you have on you. Give me everything you got. Go, go work in the fields for a couple of days and then we’re going to deport you so we can take some money, you know, to, to redeem. That, that’s not a thing that actually happens in this country. There is no such thing as redemption money. But nonetheless, what we saw last night was Donald Trump’s disdain for his own base. He thinks so little of them that he was able to go in front of them, lie to their faces, and to their credit it didn’t appear immediately that they all bought into this whole redemption money thing. Because after he said that, and he, you know, is waiting for applause. Everybody’s just kinda like, well whoa, what? Redemption money, I don’t know, I don’t know what that is.

However, if you back it up a bit and you hear when he asks, you know who’s paying for it, right? You do hear plenty of morons in the crowd yell out, Mexico. So I guess Donald Trump is right. I guess he should treat these people like they are stupid because if you think that Mexico is paying for the wall, you’re not a bright human being. I’m sorry you’re not. You’re an idiot. The truth is not hidden, folks. This isn’t something that only a select few of us have access to. Everyone in this country, hell, everyone on this planet with access to a non blocked internet source can easily find out in a matter of about 15 seconds where the money for the wall came from. It came from United States taxpayers. It is not this so-called redemption money from illegal immigrants. It is not coming from the Mexican government. It is coming from US taxpayers. But if Donald Trump can get away with these lies in front of his base, in front of his most ardent supporters, then I guess he’s right. I guess his belief that his base is stupid is actually true, but that’s up for, up to his base to decide. They can decide whether or not they want to believe the lies that they know are lies, and if they decide that, yes, they do want to believe them, then I guess Trump was right about them after all.