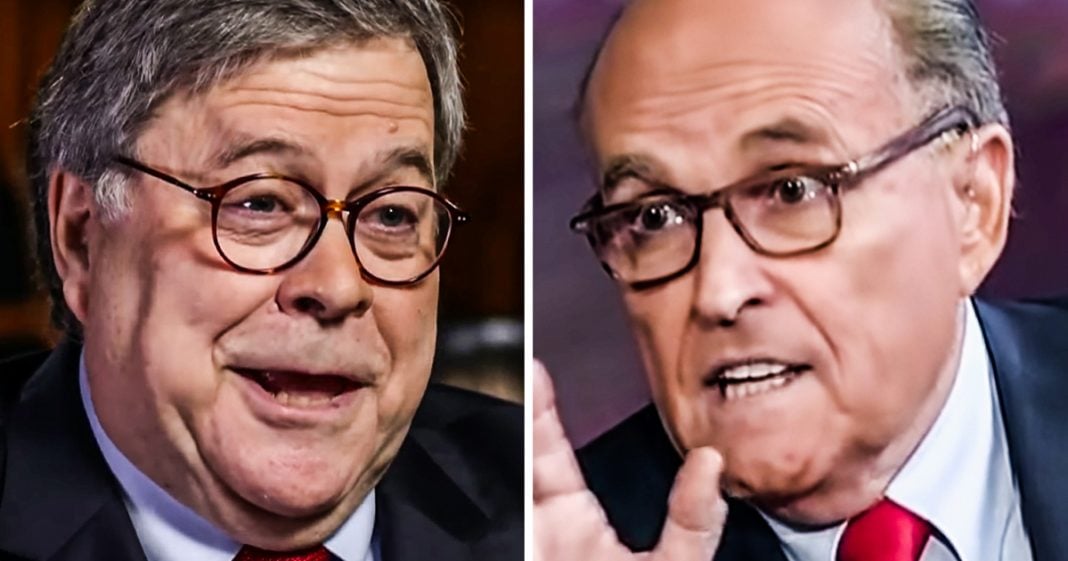 The Department of Justice, and attorney general William Barr specifically, have confirmed that they are receiving dirt from Rudy Giuliani from the Ukraine. This information is most likely related to the Biden family, as Trump is trying desperately to pin a scandal on the failing Democratic candidate. Ring of Fire’s Farron Cousins explains what’s happening and why it matters.

Yesterday, attorney general William Barr, confirmed for the nation that the DOJ is in fact getting dirt from Rudy Giuliani from the Ukraine on the Bidens. Rudy Giuliani, as most of us know, has been coming and going from Ukraine for many months now, working with sources inside of the government and outside of the government and people who used to be in the government, most of them disgraced in the Ukraine, by the way. But nonetheless, Rudy Giuliani has been meeting with these people, trying to dig up as much dirt as possible on the Biden family. And at Donald Trump’s request, according to Giuliani, he has been secretly feeding that information to the department of justice. Now here’s the thing. On Sunday, Lindsey Graham went on, I believe it was Face The Nation where he admitted that Barr was working with Giuliani and that was the first time that this admission was made public.

So then yesterday Barr had to come out and admit, okay, well yeah, I mean we’re, you know, Rudy comes in and he gives us stuff because as a law enforcement agency, somebody walks in and hands you evidence or information, you have to treat it all seriously, no matter how absurd it may seem. Right? We look at it, we evaluate it. Maybe we do something, maybe we don’t. And to be fair to William Barr, which he’s not fair to us, but let’s be fair to him for just a moment, that really is how any law enforcement agency in this country would operate. Right? You bring in information, they’re going to take a look at it. So there’s nothing wrong with that per se. The problem we have here is that Rudy Giuliani is under criminal investigation and one of the potential criminal charges against him are operating as a foreign agent.

His buddies who helped him dig up all this dirt in the Ukraine, going to be facing trial in just a few months. Right? He, he’s cohorting with criminals and he himself may actually be one. We got to wait for the investigation to conclude on that and the charges to be filed. But Rudy Giuliani is not a man to be trusted. Furthermore, if Donald Trump is in fact involved in this and according to Giuliani, he absolutely is because he’s the one who directed him to go talk to William Barr about it. Then we’re right back to square one, folks. We’re right back to Donald Trump using his intermediary, Rudy Giuliani, to get foreign intelligence that could influence a political campaign here in the United States. We’re, we’re right back to where we started because the impeachment didn’t go anywhere. He was acquitted and rather than tuck his tail between his legs and say, oh gosh darn it folks, I’ll be better. I promise.

He’s doubling down on it. He says, I am untouchable. I am invincible. Rudy, get back to Ukraine and let’s get the thing done. The only irony here, and this is a bit of sweet irony, really, is that Biden is tanking in the polls. Right? His pathetic performance in Iowa has cost him a lot of support nationally. And if he has another day like that today in New Hampshire, things are going to get pretty bad for Biden. So all this dirt, all this effort and all the laws that they are breaking with this administration to try to dig up dirt on Joe Biden may all be for nothing because the voters are already rejecting him.