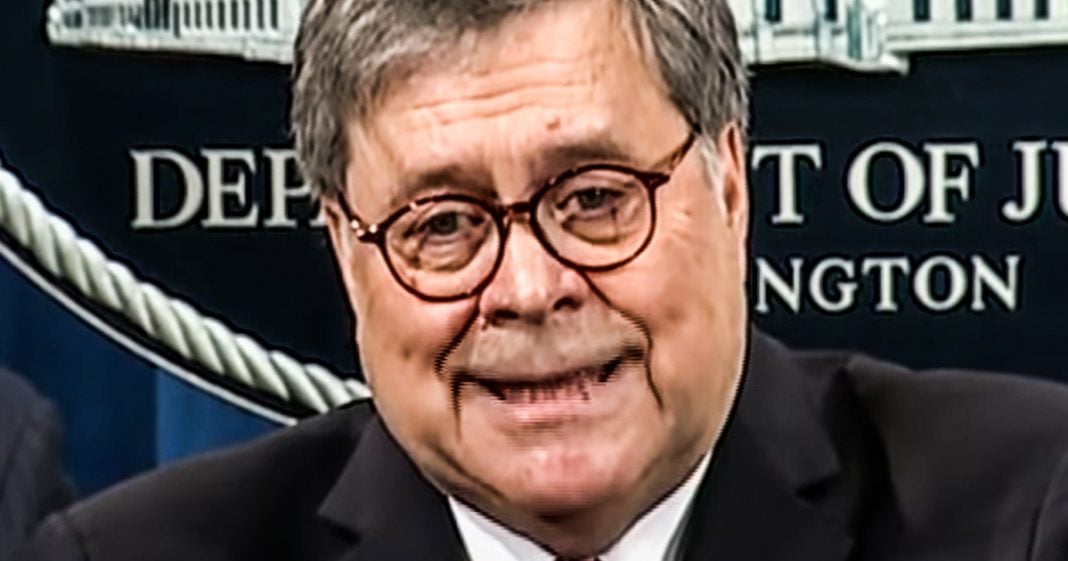 The Department of Justice has been hit with a whistleblower complaint after awarding $1 million in grants to two organizations to fight human trafficking. These groups are unproven and haven’t been around as long as some of the other groups with a proven record of success, but the grants were awarded anyway. Ring of Fire’s Farron Cousins discusses the complaint and explains what’s happening.

The US department of justice has been hit by a whistleblower complaint over their anti human trafficking grants that they handed out recently. More than $1 million went to two separate groups here. We have Hookers for Jesus and the Lincoln Tubman Foundation, and those two organizations, even though they were shown to be less effective, hadn’t been around as long as some of the other ones. They were labeled a tier two group, meaning really not all that great. They were given this $1 million over two groups that were rated tier one, high as possible. Independent evaluators came and said, these are the groups that are doing great work with human trafficking efforts. They deserve the money. These other groups do not.

And those two groups who deserve the money, according to the independent evaluators were the Catholic Charities of the Diocese of Palm Beach and Chicanos Por LA Causa of Phoenix. Now there is a reason that this administration decided, no, we’re not going to go with these two qualified groups and we’re going to give it to these other groups. And the reason is because these two groups who should have gotten the money, have both spoken out against the Trump administration. Chicanos Por LA Causa has spoken out against Donald Trump’s immigration policies. The Catholic Charities of the Diocese of Palm Beach has some of their members that have actually been delegates for the Democratic party.

So two groups that don’t exactly agree with Donald Trump, but they are doing great work on human trafficking. But that’s not enough. So instead we get Hookers for Jesus. Now, Hookers for Jesus was founded by a woman who is a human trafficking survivor. Okay, fair enough. And the name of the group Hookers for Jesus is basically a way to show that, listen, doesn’t matter where you came from, what happened to you, what circumstances befell you, you can still be a good person and live for Jesus. So that’s, you know, the name is not to supposed to be actually hookers, but that’s, you know, what they’re trying to imply here. Everybody can, can follow Jesus. He doesn’t care who you are. The problem with the group is that as it is a religious fundamental group. They force the people who go there to go to church and engage in all these highly secular activities. They are forced to do this or they are punished. They are forced to adhere to this religion or they are punished.

And granting money to this organization is actually forbidden by the rules of these grants because these grants by law cannot be given to any group that only promotes religion. No religion, that’s the rule. You cannot promote religion. You cannot force your religion on anybody if we give you this money and the government learned it’s lesson a couple of years ago when they gave Hookers for Jesus a $300,000 grant. And then the next year they came back asking for more money and the federal government said, well, no, because everything we’ve seen is just you promoting religion with these people. You’re not actually helping them. You’re punishing them. You’re effectively making them live like slaves. So no, you don’t get money. But then, as I mentioned, when it came down to now between a group that treats people like slaves and was already denied federal money in the past, a group that was not qualified to receive this money for anti human trafficking efforts, they were still awarded it because God forbid, you give a little bit of money to groups who don’t 100% agree with Donald Trump, but still do phenomenal work in this country.

That’s how petty things are in Washington DC this other group, the Lincoln Tubman Foundation was actually founded by a woman who hugely connected to the Republican party. I believe her father was actually a delegate for Donald Trump in 2016. So you can see why this group got their money too. More than a million dollars to tackle a very serious real issue happening in the United States today and the DOJ decided to award a couple of failing Donald Trump cronies rather than groups that could actually have done a little bit of good in the United States.