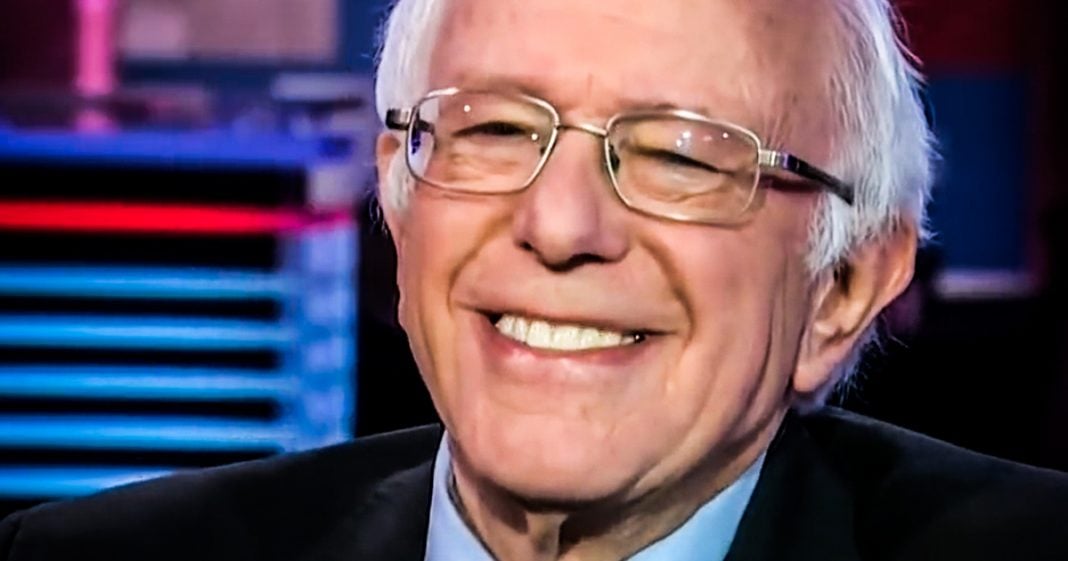 The latest polling data shows that Bernie Sanders has firmly displaced Joe Biden as the Democratic frontrunner, and a strong showing in New Hampshire today could drive those numbers even higher. Bernie is surging with all demographics at the moment, and even beats Trump by nearly 20 points nationally among Independent voters. The message is becoming clearer by the day – Bernie can win this thing. Ring of Fire’s Farron Cousins discusses this.

So today is the New Hampshire primary, and hopefully there’s no Iowa-ness happening. Hopefully there’s no disputing of results. Hopefully by the end of the evening we get a very clear winner. But even if we don’t, we already have a clear front runner in the Democratic party because according to the latest polls released yesterday, Bernie Sanders has now officially overtaken Joe Biden, who continues to fall, and ladies and gentlemen, Bernie Sanders is now the front runner of the 2020 presidential election on the Democratic side. But you know what? It’s really not just on the Democratic side. As it stands right now, Bernie Sanders is the front runner for the 2020 presidential election because not only has he left the rest of the Democratic pack in the dust at this point, according to this latest poll, and again, okay, it’s one pole, sure one pole. But it’s showing what all the other polls are starting to show as well.

But here’s the thing, and this is why I say not just the Democratic front runner, but the front runner overall, is the fact that he’s beating Donald Trump by 17 points among independent voters here in the United States. That’s right, the candidate who the media repeatedly tells us isn’t going to be able to unite the country against Trump is somehow uniting the country against Donald Trump. All of the attacks on Bernie have backfired. You know, Chris Matthews coming out the other day saying, he’s going to have us in Central Park executing us. Chris Matthews actually said that, and Bernie surges. Hillary Clinton has come out once every week for the past three weeks to try to trash Bernie, throw some shade at him, and every time she does, he gets more popular. I guess that’s what happens when the least popular politician in the country starts attacking you. People say, wow, if the worst person hates him, he must be doing something right.

And apparently that’s what’s happening now. Joe Biden is falling. Bernie Sanders is surging and he is officially the front runner and the rest of the candidates, somewhere behind all those two. Here’s where it stands right now, Bernie Sanders, 25% among Democratic voters. Not a lot obviously, but considering the amount of people the support is spread amongst, 25% takes it. That is a 4% increase over the last survey, which was taken before the Iowa caucus. Joe Biden is at 17%, he fell nine points since the last poll. Bloomberg is up seven points to 15. Of course, this happened before that video showed that he’s a real piece of crap. So we’ll see what happens in the next poll for Bloomberg. Elizabeth Warren dropped one point down to 14%. Buttigieg is now fifth place with 10%. Klobuchar is at 4%, she dropped three points and nobody else even hit 2%.

These are national polls. This is not a state poll. This is not what’s going to happen in the next primary or caucus. This is nationally and those are the ones we probably should take a little bit serious, right? Because this election isn’t just going to happen in one single state and then a week later, another state and then another. No, it happens all on the same day. We don’t, we don’t really get to see what everybody else did till the end of the evening when the polls have already closed. This poll matters and this poll shows us that all the attacks on Bernie, all the smears, all the lies about him not being able to unite this country, it’s lies. Bernie Sanders is surging because he’s out there talking about issues that Americans actually care about. He is proposing solutions that Americans actually agree with. They’re not sitting out there whining that, a Bernie bro was mean to me online, so I’m not voting. I’ll do four more years of Trump because I don’t, somebody yelled at me on Twitter. If that’s your argument for voting against Bernie Sanders, then I suggest you just delete your Twitter account because you’re not mature enough to handle being online anymore. Bernie Sanders could win this thing. And as it stands right now, according to the polls, Bernie Sanders is going to win this thing.