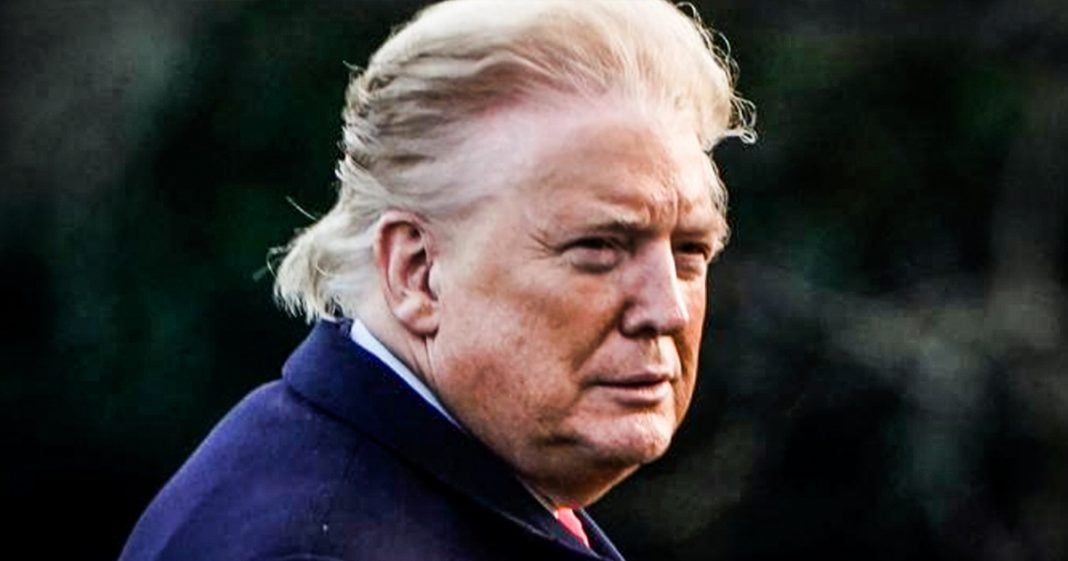 The online community erupted in hysterics this weekend as a photo of Donald Trump went viral. The photo showed his horrid combover and his obviously fake tan lines, prompting ridicule from every corner of the internet. But Trump insists that the photo is fake, even though the authenticity of it has been verified. This is the kind of thin-skinned person we have in charge of our nuclear arsenal. Ring of Fire’s Farron Cousins discusses this.

Photo Credit: U.S. President Donald Trump walks across the South Lawn to the Oval Office as he returns from a day trip from North Carolina at the White House in Washington, U.S., February 7, 2020. – Joshua Roberts | Reuters

If you spent any time on social media this past weekend, you’ve probably seen the picture and you know which one I’m talking about too, right? It was Donald Trump on the South lawn of the White House, wind blowing his comb over all the way back and you could very clearly see the outline of his little fake orange tan going all the way around his face. This photo was taken by Reuters. It is authentic. This was in fact what the president looked like at the White House. Nevertheless, Donald Trump insisted on Twitter, he tweeted the following, he said, more fake news. This was photoshopped obviously. But the wind was strong in the hair looks good. Anything to demean. Now this isn’t news, so why are we sitting here talking about Donald Trump freaking out over a photograph that he claims was photoshopped, even though it was authentic, taken by Reuters?

Well it’s very simple, this is the man in charge of our nuclear arsenal, folks. Donald Trump can give the go-ahead at any point in time and say, nuke this person, this country, this area, whatever it is. And here he is getting triggered online by a photograph, a photograph that already just revealed what we all knew to be true anyway, and that is that the guy has a fake tan. It’s not an electoral issue. It’s not a policy issue. It’s just something everybody jokes about because it’s an easy target, right? You’re orange, we know it. We move on and we talk about other important things, but here we have the leader of the free world or what was once the free world, kind of, throwing a little hissy fit on Twitter because of this photograph that’s making the rounds and everybody’s laughing at him.

Now, to me, the scary thing about this story is that is this all it would take for world leaders to really, really stick it to Donald Trump? Just send out some photoshopped pictures of him on Twitter and just call it a day. Like, boom, we just got the United States. Look at this guy. Look how freaked out he is. Look how angry we made him because of a stupid photograph. And what’s even more worrisome, by the way, is the fact that the president even took time to address this. That’s kind of crazy in and of itself as well, right? I mean, Obama didn’t respond to all the little phony controversies that Fox news was out there creating every day. The fact that he liked Dijon mustard or wore a tan suit that one time, or even the more obscene attacks comparing his wife to an ape, claiming that she used to be a man, he didn’t even respond to those.

But this president responds to every little thing that he comes across because he is so thin skinned, he can’t let anything go. And again, this is a real photograph. This is what Donald Trump looked like on the White House lawn. This was reality. And the president once again got on Twitter and told us, nope, not in my world. This photograph doesn’t actually exist in the way it thinks it does. I’m right. You’re wrong. Reality is whatever I say it is. That ladies and gentlemen is the ranting of a crazy person.