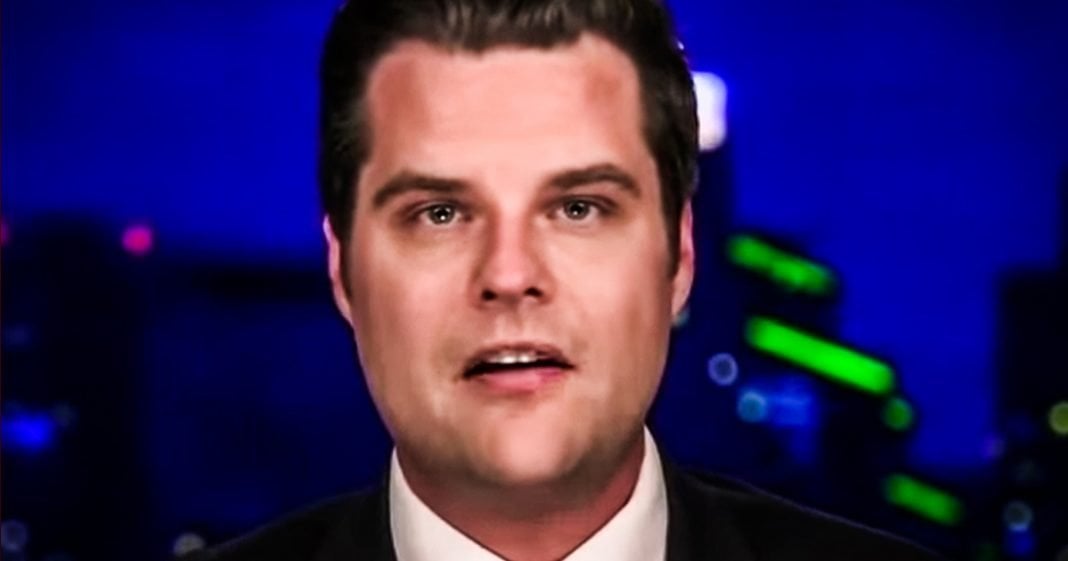 Matt Gaetz tried to get Nancy Pelosi in trouble for ripping up her copy of the State of the Union address by filing an ethics complaint against her, but now he’s been hit with an ethics complaint from Democrats in Florida for his shenanigans during the impeachment hearings in the House. The complaint to the Florida Bar alleges that Gaetz acted inappropriately by interrupting the House impeachment proceedings on two separate occasions. Ring of Fire’s Farron Cousins explains what’s happening.

Following Donald Trump’s state of the union on a Tuesday evening after Nancy Pelosi ripped up her copy of the speech, Matt Gaetz decided he was going to file an ethics complaint against her for allegedly destroying government records. Needless to say, that’s not how that law works. That was not a government record. That was a photocopy of a speech that was handed to her, not deposited with her for her safekeeping. So anyway, Gaetz got rightly ridiculed for this, but the Miami-Dade Democratic party, knowing how ridiculous it was for Matt Gaetz to do this, they didn’t decide to go out there and ridicule him. They decided, you know what, jerk, if you can file an ethics complaint, so can we. So the Miami-Dade Democratic party decided to file an ethics complaint against Matt Gaetz with the Florida Bar Association for Gaetz’s conduct a couple of months back when he tried to storm the impeachment hearing in the House of Representatives.

You know, when he wasn’t allowed to go in there, wasn’t allowed to use a cell phone in that restricted area. But he did both anyway. And then when they kicked him out, he still refused to leave and he brought other Republicans with them and they sat there for so long that they ended up ordering pizza. And everything I just said sounds absolutely ridiculous and unfortunately every single bit of it is true. But Gaetz went in there against the rules. He broke the rules as part of a legal proceeding. And the Miami-Dade Democratic party understands that if they had filed a complaint with William Barr, the attorney general of the United States, it would have gone nowhere. Barr would have laughed and ripped it up faster than Nancy Pelosi ripped up Trump’s speech. So they filed it with the Florida Bar. And the reason they were able to do this is because obviously the Florida bar is only going to handle any kind of thing, you know, disciplinary action, that actually involves a trial. Right?

I mean, if you’re just a lawyer and you go out there and you just do something, Bar may punish you depending on the severity, if you do something illegal. But if you’re just being a weirdo, Florida Bar’s like, well, you’re a weirdo. But we can’t punish you for being weird. But the Miami-Dade Democratic party says, this isn’t just Gaetz being a weirdo, because the impeachment hearings were the precursor to a legal trial in the Senate, the impeachment trial, Matt Gaetz interfered with a legal proceeding, and it is on those grounds that they filed this ethics complaint against Matt Gaetz with the Florida Bar. Now, as you all remember, this is not Matt Gaetz first tangled with the Florida Bar. He got reprimanded a while back for allegedly threatening Michael Cohen before his testimony, before the House of Representatives about a year ago. They ultimately decided we’re not going to punish him for it, although we strongly must suggest that he does not engage in this behavior again. So we’ll see what happens from this. This, I think, honestly, is a very strong argument. He interrupted legal proceedings, which was against the rules, made a spectacle of himself, and the quote they put in the complaint is just phenomenal. It says, Gaetz’s actions were described as improper, unprofessional and unethical and were meant only to feed Gaetz’s unjustifiable large ego and penchant for grandstanding. Unjustifiable large ego. I love that, and that quite possibly is the best descriptor imaginable for Matt Gaetz.