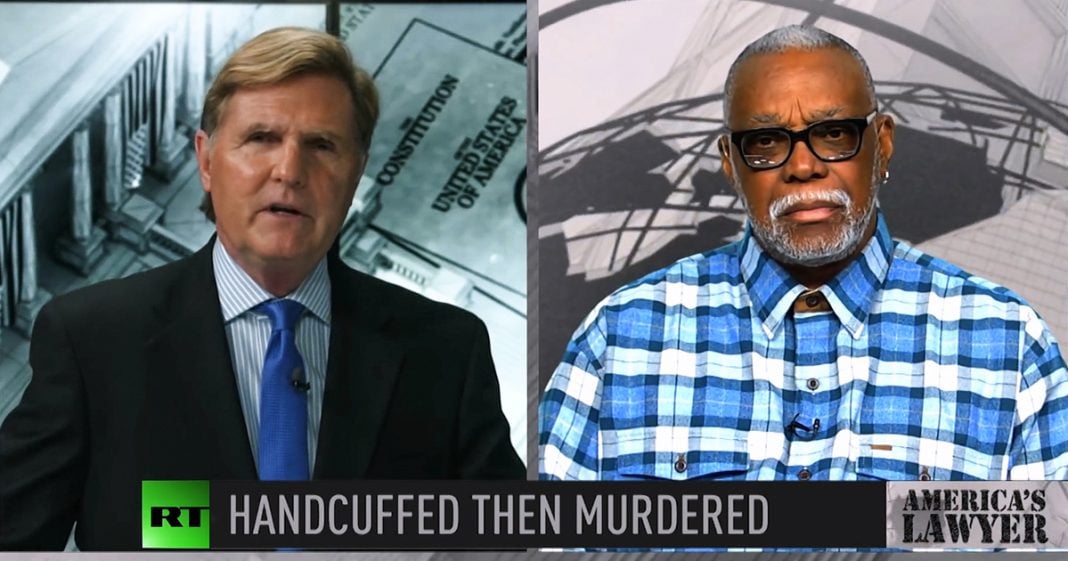 Via America’s Lawyer: Former DC metro police officer Ronald Hampton joins Mike Papantonio to talk about the murder of William Green WHILE he was handcuffed and detained in the front of Corporal Michael Owen Jr.’s squad car in Prince George’s County, Maryland. WHY wasn’t the corporal wearing a body camera when he fatally shot Green seven times?

Mike Papantonio:             In Prince George’s County, Maryland corporal Michael Owen jr is being charged with second degree murder for shoot and killing William Green, who was arrested and handcuffed in the passenger seat of the officer’s squad car. It turns out corporal Owen was not wearing a body camera during the incident and the same officer had actually alluded a murder charge back in 2011 for killing another man. Former DC Metro police officer Ronald Hampton is here to walk us through this. Ronald, we’ve seen the media swarming with stories about police accountability. Corporal Owen wasn’t wearing a body camera at the time, and he shot and killed this handcuffed detainee. Does, does this incident speak to the failure of the police department? And, and I gotta tell you something, let me preface it by saying this. As I read this story, I thought back to, to a wonderful movie it’s called Serpico.

Mike Papantonio:             And it was when there was corruption within the police department, with the detective department and people were being shot left and right because they wanted it to be kept quiet. Has that issue surfaced here?

Ronald Hampton:             Well, I think, it’s a known fact that Prince George’s County police department has been having problems for some time now. And They’ve been under federal investigation. The justice department has been in there. And so, this has been going on for a very long time. So I do think that there are some basic cultural issues as relates to the police culture in the department. But it’s a fair, you also on the part of the leadership of not only the police department, I feel, but the, but the County in the sense that you can’t have 80 police officers wearing cameras when the whole force needs to be wearing cameras. And it just, that, that is something that they all have to share in the responsibility of, because they claim they just didn’t have the money.

Mike Papantonio:             The man is sitting inside the police car with his hands behind him. And it just leads me to so many stories we’ve seen around the country where you have a police department that’s somehow involved with either drug trafficking or some type of illegal activity. They make arrests, they end up taking that person out an arrest because they find out that there’s somehow connected to an issue that might uncover that. I, as I read this story to me, again, if it had been, if there had been any notion of a reason, I’d say, you know, might, maybe that, maybe that kind of thinking would be farfetched. But this is an execution.

Ronald Hampton:             Oh, no, I agree. I was talking to, I happened to be in a meeting the day after the shooting with a retired former captain from the Prince George’s County police department who also happens to be Hispanic and the president of the national Hispanic police officers association. And we were talking about this, this was a, this was a execution and was no way that they were going to get out of this. And you can’t put a handcuffed person in the car front or back seat and then, and then shoot them seven times and then claim that somehow or another you all was in an altercation. That’s crazy. That, that is just pure crazy. But, but, but like I said, that’s a systemic issue of the culture of the department as it relates to these kinds of shootings. This has been going on a long time.

Mike Papantonio:             I mean you, you managed police departments, twenty-four years. You managed officers, you saw every iteration of bad policing. You, as a matter of fact of the history I know about you, corrected some of those problems when you were in that business of policing.

Mike Papantonio:             So just why is it so difficult for police departments to describe, to train officers to properly use body cameras? First of all, I don’t think this was a mistake. I think it was intentional.

Mike Papantonio:             As a former police officer yourself, what complications are there? I mean, it protects the police officer to use a body camera where I can’t make accusations like this.

Ronald Hampton:             Well, the, what, what we have known, what we have come into, to information of is that body cameras on the part of police officers have helped them just as much as it, as it has helped the public. So there’s no excuse. The department should be outfitted throughout the police department. Not just a small segment of those officers. But, but this is a problem that they inherit. They, that they say they had because they didn’t have the money to buy the cameras. Well that’s no excuse. And anytime you have that problem, then you’re going to also have the problem that, that this officer is facing and that the police department is facing. It’s not just the officer, it’s the police department, but, but there’s a systemic cultural problem in policing that is also part of the training.

See, I don’t believe you can. I don’t believe you can retrain people who you train to do something wrong in the first place. And part of the problem is the, the structure of policing as it relates to the training of how we do it. So we teach them how to shoot and all the other things that they do, and then we also teach them how to cover their ass. Well, if you’re going to teach them the right way, then why you had to teach them to cover their ass? Because then they’ll be doing the kind of thing that they need to do, so they don’t have to worry about covering their butt because they haven’t done anything wrong. But that’s a systemic problem that’s, that’s found, the foundation of it is in the training and the culture of policing. And this is not just PG County that’s across the country.

Mike Papantonio:             Yeah. Ronald, you were in this business a long time. You trained a lot of police officers, you found a lot of corruption in the process of training. I want to follow this story with you. I want to see if I’m right or wrong.

Mike Papantonio:             This was an execution and the story goes a lot deeper than that. Ronald, thank you for joining me. Okay.