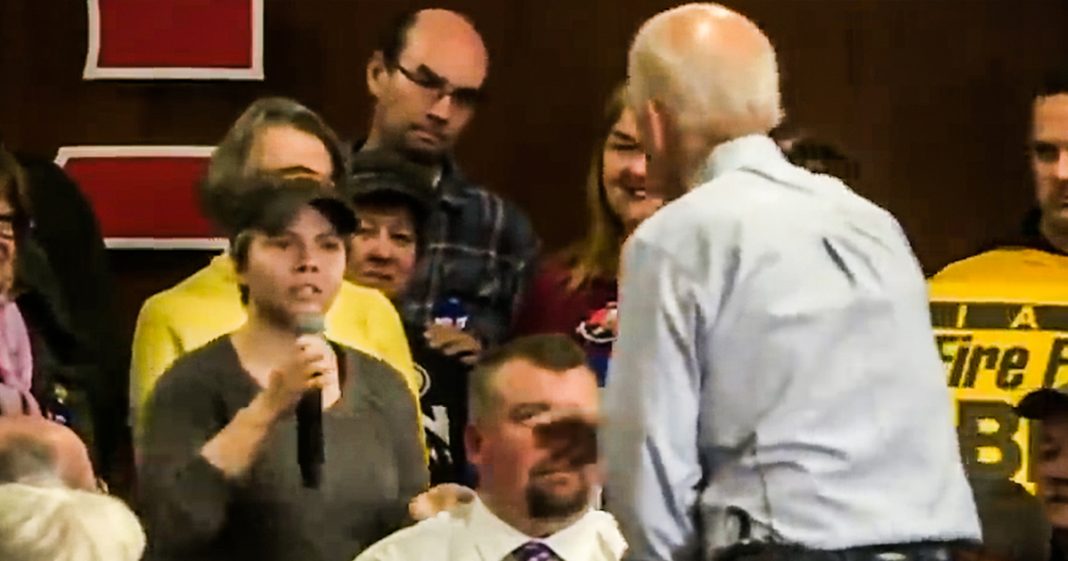 Joe Biden clearly wants to live up to his “Crazy Uncle Joe” persona, and at a rally a few days ago he put on his crazy face and called a woman a “lying dog-faced pony soldier” after she said that, yes, she had attended a caucus before. This isn’t the first time that Biden has used this bizarre insult, but it does further show us that this man doesn’t have the temperament to be president. Ring of Fire’s Farron Cousins discusses this.

Joe Biden at this point, I think he has finally decided he is going to embrace the crazy uncle Joe persona that the media has slapped on him. Just a few days ago at a little rally, he’s doing a Q and A ahead of New Hampshire. Young woman walks up there, college student, asked him, hey, you know, you had a pretty poor showing in Iowa. You know, that that was weird. We didn’t expect that. We may not have expected you to win, but you had a very poor showing, what do you make of that? You know, and Joe Biden in true Joe Biden fashion went off the rails and insulted this poor young woman. Here’s what happened.

Young Voter: So you’re arguably the candidate with the greatest advantage in this race. You’ve been the vice president. You weren’t burden down by the impeachment trials. So, or, in the persecution. So how do you explain the performance in Iowa and why should the voters believe that you can win the national election?

Joe Biden: It’s a good question. Number one, Iowa’s a Democratic caucus. You even been to a caucus? No you haven’t. You’re a lying dog-faced pony soldier. You said you were said, but you’re, you’re, now you gotta be honest. I’m going to be honest with you. It was a…

You lying dog-faced pony soldier, so sayeth uncle Joe. Lying dog-faced pony soldier, and then everybody laughs. I don’t know if they’re laughing because he insulted this young woman or if they’re laughing because they’re kind of nervous like, ah, oh God, he’s, he’s doing it again. He’s being Joe Biden. Why are we here? Or if they’re just laughing, ha ha ha, you have no shot at being president of the United States because I would go with the last one. If I were there, I would have laughed at that. But not because he insulted that young woman who clearly didn’t deserve it, but because this man has no chance of being president. If Joe Biden is the nominee, Democrats are going to get destroyed and they’re absolutely going to deserve it. But here’s the thing. He flew off the handle with this weird, crazy insult and he seemed very happy doing it. He didn’t even seem angry. Have you ever been to a caucus? Yes, I have. You’re a lying dog-faced pony soldier. Poor, young woman just said, whoa, whoa, whoa, I’m, I’m a, I’m a what? I don’t even know. Are you even answering my question anymore? We were asking why you’re not electable and here you are throwing the weirdest insult I’ve ever heard in my life at me.

worst part is, it’s not the first time Joe Biden’s done this. He did it back in 2018 while campaigning for Heidi Heitkamp and according to Joe Biden back then, lying dog-faced pony soldier, is somebody he got from his brother who allegedly he got it from an old John Wayne movie except for the fact that nobody has been able to corroborate that this line was ever said in any John Wayne movie. So Joe Biden’s brother apparently made it up and some film critics have said maybe he took it from this part from this movie, this part from another movie. So there’s a lot of crazy, I guess, in the Biden family and they like to share the crazy. But Joe Biden’s reaction here and his insult to this woman because that is what this is, this was an insult, this is absolutely disqualifying.

I mean, can you imagine the corporate media coverage if Donald Trump called somebody a lying dog-faced pony soldier? We would be talking about it from now to the end of his administration, lying dog-faced pony soldier. Joe Biden does it, and we had to go searching for this clip online because it was only mentioned in a couple of tweets and nobody believed it. They’re like, no, this is too crazy to be real. Well, you just saw it folks. That was real. This really happened just a couple of days ago and it proves once again, Joe Biden does not have the temperament to be the president of the United States and he does not, under any circumstances, deserve your vote in the primaries.