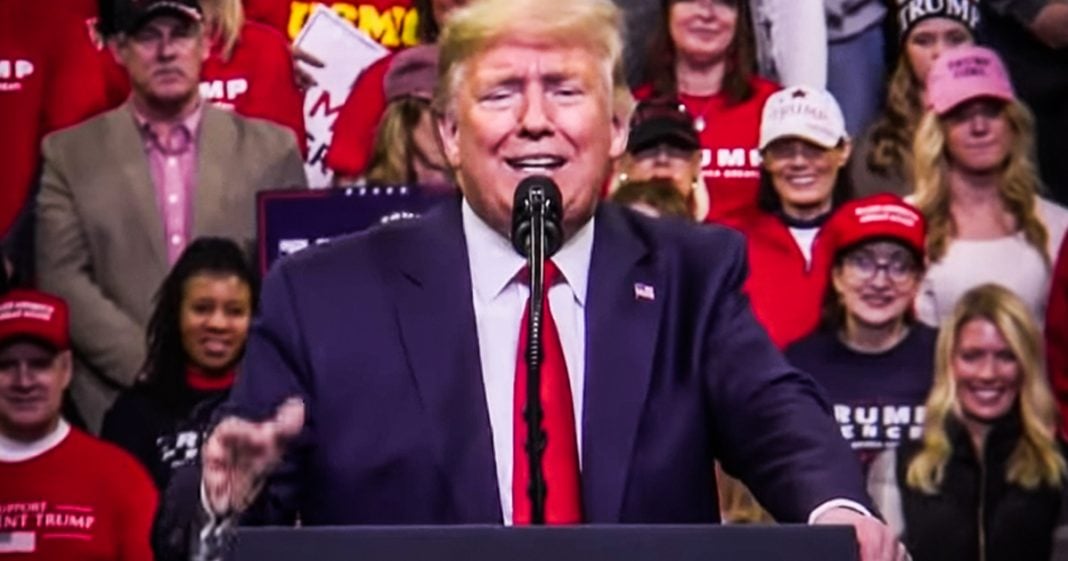 On at least 27 different occasions, Donald Trump has “joked” about not leaving office after his term ends. The sickest part is that the most recent instance resulted in the crowd chanting “12 more years!”, apparently unaware that they were cheering on the end of this Republic as we know it. Are Trump’s comments just fun little jokes that he uses to toy with the media, or is there actually something sinister at play? Ring of Fire’s Farron Cousins attempts to answer that question.

On at least 27 different occasions since Donald Trump was sworn in as president. 27 different occasions. He has a joked about staying in office long after his term ends. Now nearly every one of those times he does point out. I’m kidding. I’m joking. Sometimes he says, I do it because it makes the media go crazy, but 27 times, that’s a lot of times to tell the same joke.

So at this point we have to start to wonder, is Donald Trump actually kidding about remaining in office after his term ends? You know, there’s been a lot of speculation about whether or not Donald Trump is actually going to accept the results of the election in November. If he loses and maybe he just comes out and says, no, this is illegitimate. I’m still president. I’m not leaving. Then what happens? People are asking, well, in that particular instance, Trump’s going to be forced out of office one way or another. Quite possibly physically. The problem is not that he keeps joking about it or that he may not leave the white house. If he gets booted out, there are people in place to make sure that he physically leaves the white house and they’re going to make sure he does that. The problem is his supporters, his supporters are open to this idea. His supporters love this idea and that’s where the real danger lies. When you have segments of the population, no matter how small, who are now saying, we want president for life, just like China has now, and Trump praised the president for declaring himself president for life. He likes that idea. He truly does.

If Trump was joking, which again, not really clear if he is, the crowd wasn’t. They liked that idea because they’re a cult. They don’t care about the Constitution. They don’t care about the limits we have in place on both terms and power of the president of the United States. They view Donald Trump as some sort of godlike figure that needs to stay up there as as possible. He’s done nothing for them, by the way, and yet they worship him and they’re fine with destroying this country just to let this con man have more time in office. It’s not Trump that we need to be worried about. It’s the crazy people who want him to stay longer than two terms.