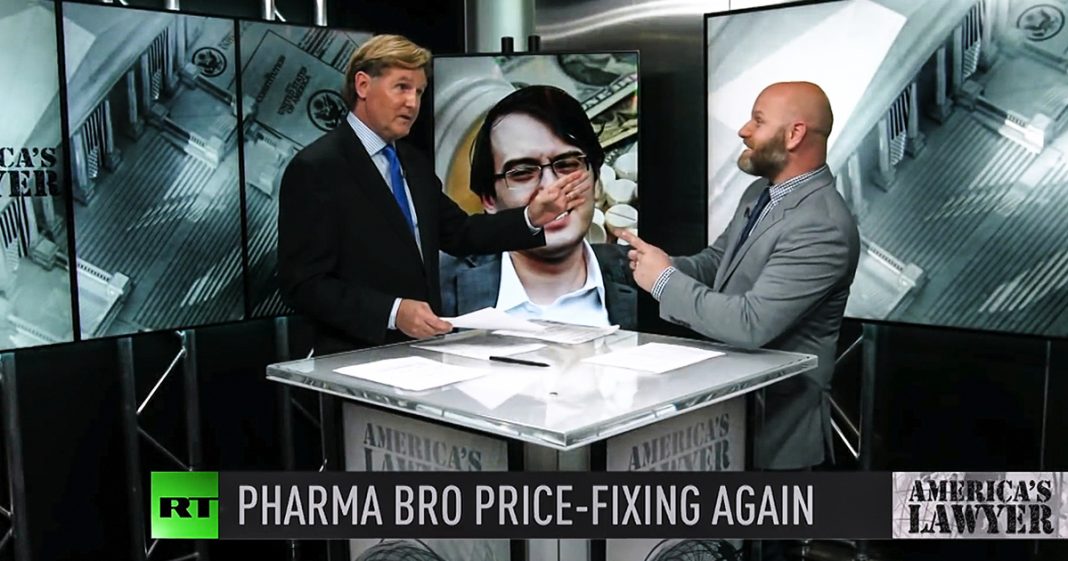 Via America’s Lawyer: “Pharma Bro” Martin Shkreli is again facing accusations of predatory price-fixing, this time for his patented drug Daraprim, which is used to prevent malaria. Mike Papantonio and Farron Cousins discuss.

Mike Papantonio:             The pharma bro Martin Shkreli has been accused of price fixing in a new lawsuit. Farron, what’s the new lawsuit about? You know, this guy’s always in the news about doing awful things. That’s how we can know that, that it’s big story.

Farron Cousins:                  He truly is. And, you know, Shkreli is currently serving time in prison for fraud and a lot of people don’t realize that. They think he actually went to jail for, you know, increasing the drug price a couple hundred thousand or a thousand percent in a single day. He’s in prison right now for securities fraud. He ripped off wealthy people. But this new lawsuit from the FEC and the New York attorney general says, okay, we, we actually finally looked into your Daraprim price increase and we think we’ve got a price fixing case against you because you locked out the generic. You refused to let them come to market. That’s what this lawsuit is saying.

Farron Cousins:                  Well, exactly. That’s, that’s the punchline of all of this is that yeah, Shkreli’s a bad, bad person, but Shkreli, aside from the securities fraud hasn’t done a single thing that every other drug company in this country doesn’t do on a regular basis.

Mike Papantonio:             Okay. We’ve done so many stories on price, price fixing, where I don’t care what the company is, whether you’re talking about Merck, whether you’re talking about Johnson and Johnson, all of them, their, their price gouging is uncontrollable. Now we had a chance to do something about it, if you’ll remember last, well I guess it was during the Obama administration where we were going to make it to where we could import from places like Canada. Right?

Mike Papantonio:             And then Cory Booker led the charge against that. And so we’re stuck with the same kind of, what is it, you’ve seen, you’ve seen situations of 10000% markup on some of these drugs, right?

Farron Cousins:                  Right, right. The Daraprim, and again though, actually just at the beginning of this year, so we’re talking four and a half weeks ago, you had every major drug company go ahead and announce their price hikes for 2020. There was no reason to do this. Some of these drugs had been on the market for 25 or more years. They just wanted to make more money off it, and that’s what Shkreli did. It’s dirty. It’s deceitful, but.

Farron Cousins:                  He came in with lots of money, bought a company, said I’m going to do what everybody else is doing, and he gets popped for it. Meanwhile, your CEOs of Pfizer and Merck and Eli Lilly, they’re still going out.