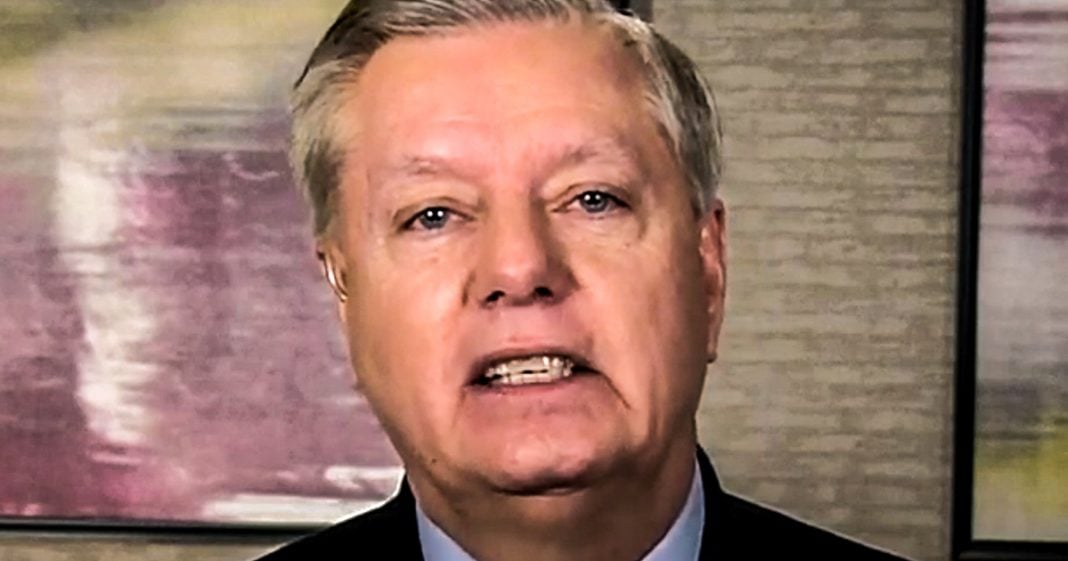 Lindsey Graham May have delivered for Trump with the impeachment, but he’s not done yet. Graham has promised that the Senate is now going to investigate the whistleblower who originally brought the story to light, as well as the Biden family for alleged corruption. Ring of Fire’s Farron Cousins explains what’s happening.

With impeachment effectively over, Republicans in the Senate now feel energized, probably not in their polling numbers. I mean, those are not so great and this could come back to bite them in November if the public remembers, but they still feel energized. They feel like they got the wind at their backs, they can accomplish anything if they just put their minds to it. It’s a very good motivational story for us. But the Republicans via Lindsey Graham on Fox news this past Sunday announced the next step and the next step for these Republicans after saving Donald Trump’s behind, is to investigate the Biden family. That’s right, folks. We’re not done with this yet. We’re not done hearing about all the conspiracy theories about Joe and Hunter Biden and what may or may not have happened. And oh my God, they paid him so much money to work at a company.

And to that one I say have at it. I love how Republicans, and Ted Cruz was awful with this last week saying like, well we’re going to look into Hunter Biden. We’re going to find out what he’s been doing. And most of us on the left are like, okay, go for it. Do you want help? I mean is, are you a, we’ll do whatever. We don’t like the friggin Biden’s either, folks. So have at it. And as much as I don’t like the Bidens and I do not want Joe Biden to be the candidate, I’m still willing to admit that based on what we’ve seen, they haven’t done anything wrong. Maybe it was unethical, but I think even that’s a little strong for it. Was there some nepotism at play that got him this job? Probably, happens to every politician’s kid left and right, but was there anything illegal?

No, absolutely not. So you can waste everybody’s time with this. I honestly don’t care. You can destroy Joe Biden’s political future, we would welcome that. But if you think you’re going to get Joe Biden or Hunter, Biden or any member of the Biden thrown in jail, you’re kidding yourselves. This is Hillary Clinton’s emails all over again. But it also shows us why Joe Biden is a horrible choice to be the nominee. Baggage real or imagined is still baggage with the American public. So even though Biden likely did nothing wrong with this, Republicans know that if they can keep up the facade that may be he did. It’ll be enough to tank his candidacy just like it did Hillary Clinton, and that’s the point of all this. The whistleblower one, as I said, they want to find out who this person is, discredit them publicly so that they can cast doubt over the entire Ukraine story because they think that’s going to save them in November. Time will tell. I don’t think they’re going to find what they want to find in either investigation, but at the end of them both, they’ll probably tell us that they did.