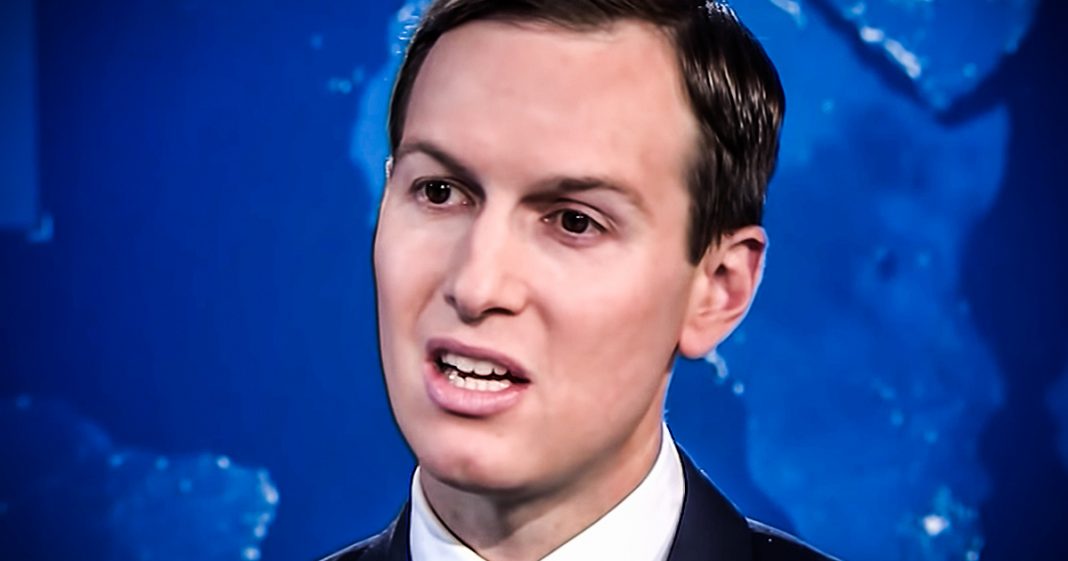 A government watchdog group, Citizens For Responsibility and Ethics in Washington, has filed a complaint alleging that Jared Kushner has once again violated The Hatch Act by using his power in office for political purposes. Kushner is not the first member of the Trump administration to be the focus of such a complaint, nor will he be the last. Ring of Fire’s Farron Cousins discusses Kushner’s rule breaking and what could potentially happen as a result of it.

Earlier this week, Jared Kushner appeared on CNN in his official capacity as a member of the Trump administration, a senior advisor and assistant to the president of the United States. I believe that is his official title and during this segment where he was representing the administration, he went forth and advocated for the reelection of Donald Trump repeatedly throughout the segment about a day and a half after this segment aired, the group citizens for responsibility and ethics in Washington crew filed an immediate Hatch Act violation complaint against Jared Kushner as it is very clearly a violation of the Hatch Act for any government official to act in their official capacity and advocate for or against a certain elected official or person up for election. That law is pretty cut and dry and Jared Kushner based on that segment very clearly violated it and that is why crew, one of the best government watchdogs out there has once again had to file another Hatch Act violation complaint against a member of the Trump administration. Now, as we have discussed in the past, it was the complaints from crew that calls the office of special counsel. Within the Trump administration to have to recommend Kellyanne Conway be fired for her repeated violations of the Hatch Act. You see, it turns out members of the Trump administration just can’t seem to help themselves. I assume at this point they all know what the law is and they all just decide, we don’t care. We’re going to break it because at the end of the day, nothing actually happens to these people. And that’s the sad part of this story.

Yeah. Jared Kushner violated the Hatch Act and yes, a formal complaint has now been filed against him. The OSC is going to look into it. They’re going to say, yes, he violated it. Maybe he should be fired in the Trump’s just going to save. No, I don’t care. It’s Jared. He’s dumb. He’s staying.

And then that’s it. And that’s what sucks so hard about most of the stories that we talk about. Any one of these scandals that Donald Trump has been involved in or a staff members had been involved in would have immediately terminated their political career, but not these morons. They seem to continuously fail upward. The more laws they break, the more the president loves them, and Kushner is not alone in violating the Hatch Act. In addition to Kushner, Cru has also filed Hatch Act violation complaints against the following people, current and former members of the Trump administration. Dan Skavino, Nikki Haley, Stephanie Grisham, Raj Shaw, Jessica Ditto, Madeline Westerhout, Helen Foray, Alyssa Farrah, Jacob Wood, Kellyanne Conway, and Lynn Patton. I mean that’s basically like enough people to fill out the cast of Saturday night live. At this point in every one of them has violated the Hatch Act and crew has been keeping tabs on it, trying to warn us. These people consistently break the law if they’re willing to break these laws. What other laws aren’t they breaking?

And the public doesn’t seem to care. The administration certainly doesn’t care. In fact, they overlook it and think that it’s perfectly fine. So what can we do about it? Well, crew is out there and they’re suing. They’re filing these complaints and then when nothing happens, they’re suing. Right now they’ve got a case going against Kellyanne Conway demanding her termination from this administration, which would be amazing. But short of that, there’s not a whole heck of a lot we can do other than obviously to tell these stories and to remind the public that Donald Trump has surrounded himself from day one with a bunch of people who keep breaking the law.