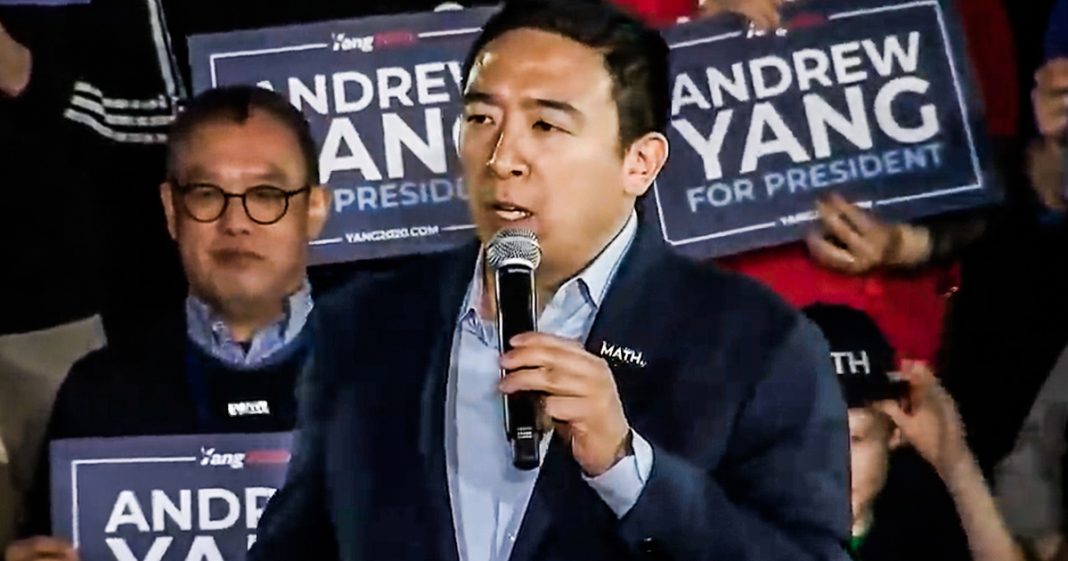 According to a new poll, more than 40% of Andrew Yang’s supporters say that they will not support a different Democrat if Yang isn’t the nominee. This isn’t good news for the Democratic Party, as every vote is vital. But is the problem with Yang’s supporters, or is it more of a reflection on the Democratic Party as a whole? Ring of Fire’s Farron Cousins discusses this.

That’s a terrifying number, folks. When you have nearly half of a candidate support, even if it is somebody who is only pulling five or 6% nationally, half their supporters say, we’re not going to vote for Democrats. Suddenly off the top, you just lost two or 3% of voters, two or 3% as we all know, is more than enough to swing an election with as close as they have been over the last few years. That’s a dangerous number and a lot of people are probably quick to jump out there and say, well, that’s because the Yang gangers, you know, they’re, they’re mostly libertarians. There’s a lot of conservatives in there. They’re not actually Democrats, so why should we care? You know, we shouldn’t cater to them and I don’t think, no, we should change our policies for them, but I think we need to look a little bit harder at the democratic party and find out why people are attracted to one person and one person only.

Why is there so much difference with these candidates that there is no room for substitutions? That’s a scary thought and I don’t think that’s a conversation that has been properly had by anybody on the left. Why do we have Bernie or busters, which we do not have nearly as many as we had in 2016 and most of the people who claim to be Bernie or bust in 2016 weren’t even that way. Why do we have 42% of Yang gangers saying they’re not going to vote for anybody but Yang. You know, we’ve got Biden, people telling us that they want to only vote for Biden. Only Buttigieg and Warren in this latest poll did not have a single supporter who said that they were “Buttigieg or bust,” “Warren or bust,” question is why? Why are the candidates so incredibly different? Because that’s what the democratic party is. The democratic party folks, believe it or not, as stole party, that’s trying to find its soul. It had one had one under FDR, had one for a couple of decades after that, but it lost its solder in the Clinton years. Didn’t know who we were. Or we progressive. Are we democratic socialist? Are we centrist? We don’t know. And that’s why we have this split today. That’s why we have these numbers. We have problems in the democratic party and it’s not the voters fault. It’s our own.