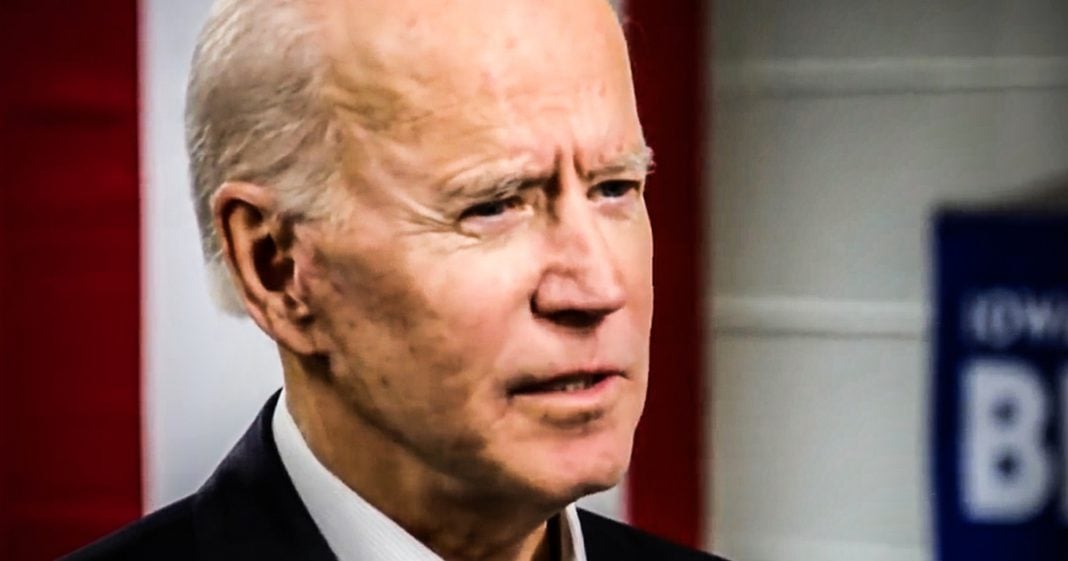 Joe Biden wasn’t expected to win the Iowa caucus, but he WAS expected to do better than he did. Much better. But instead, his overall support hovered in the teens, and now the establishment of the Democratic Party is trying to determine if he’s viable or if they should find a new candidate to back. Ring of Fire’s Farron Cousins explains what’s happening.

Well as we still try to sort out Iowa, there are a few things that actually don’t need to be sorted out at all and that is that Joe Biden had a horrible, terrible, no good, very bad showing in the Iowa caucus. And some of the establishment types, including donors throughout the country, are now worried that Joe Biden doesn’t have what it takes to win the nomination. Now ironically, they probably should have known that considering his other two failed presidential bids. You try one time and fail, okay, you can dust yourself off and try again as the song says. Well, when voters reject you twice for this position, I think that’s a pretty good indication that this isn’t what you’re meant to do. But nevertheless, Joe Biden persisted and we have all these donors out there who are now shaking in their boots wondering what the heck just happened in Iowa and if it’s a symptom of something larger to come down the line?

And the answer to that is likely yes. Now, to be fair, Joe Biden’s camp admitted months ago, they were likely going to lose Iowa and New Hampshire. They had expected this, what they didn’t expect was such a heavy loss. Biden came in fourth, his support overall in the state, as of the results, was in the teens, the teens. Now, they didn’t think he was gonna win, but they didn’t think he was going to come in fourth with less than 20% of the vote. That’s a shock to them, not just to team Biden, but to the donors all over this country. According to a recent report that happened after the Iowa caucuses from NBC news, you now have donors across this country who are looking at Biden and saying, I don’t think this guy can do it.

And now unfortunately, those same donors are starting to give people like Mike Bloomberg a second look, according to this report. They’re looking for anyone that is not Bernie Sanders that can pull off this nomination. Somebody they can funnel their money to that’s going to protect the interest of the millionaires and billionaires. Joe Biden isn’t it, because they know that if he has an equally pathetic showing next week in New Hampshire, then you can go ahead and kiss South Carolina and Nevada goodbye. It’s not going to happen because what happens at that point, Iowa. Here, let me start over. Iowa can be a fluke. Okay. I mean hell, Rick Santorum, won it for the Republicans just a couple of elections ago. So Iowa in the grand scheme of things doesn’t technically mean a lot for the winner, but for the losers on the other hand, you basically get one or two more shots to come in first or at least second and if you can’t pull that off, you don’t really have a leg to stand on.

And part of the reason for that, one of the biggest reasons for that, is because we have this weird system where we do one state and then a week later we do another and then a couple of days later we do another and then we’d go another week and we do another. What happens in that time is that people look at the results over here from Iowa, New Hampshire, South Carolina, Nevada, and people in other States suddenly start saying, well, doesn’t look like my candidates going to make it. I guess I’ll go to somebody else and that’s obviously bad for anybody polling, really third or below. But it’s also unfair to those at the top and it’s unfair to the voters to be perfectly honest with you. They don’t get to vote for the person they want to vote for because they’ve already been influenced by these other States. It is absolutely stupid that we don’t do the primaries like we do election day. Everybody goes and votes on the same day. We get all the results that night. We have a nominee by midnight, usually. That’s how it should work, but it doesn’t and in this particular instance, that’s going to be incredibly painful for Joe Biden.