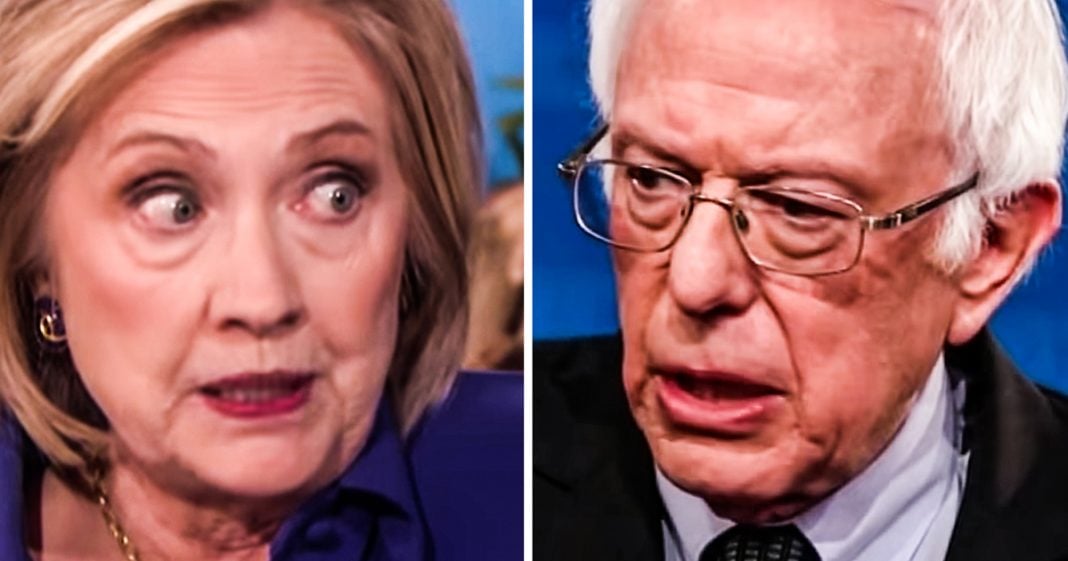 Hillary Clinton just can’t stop herself from trashing Bernie Sanders, the man who is currently the frontrunner in the Democratic race for the nomination. She told Ellen DeGeneres this week that she stands by her previous comments about Bernie, and she also believes that he is not a “viable” candidate in the election. This is an extremely bitter and entitled woman who believes that she should be president and blames Bernie for her loss. Ring of Fire’s Farron Cousins discusses this.

Well folks, it’s Friday and that means we have yet a another instance of Hillary Clinton coming out and trashing Bernie Sanders. She did it last Friday, she did it the week before, and she is doing it once again this week. On Thursday, she appeared on the Ellen DeGeneres show where Ellen asked her about her comments about Bernie Sanders. Do you want to stand by those comments? You know, that nobody likes him, that he was not a good candidate and all that crap you said about him. You want to stand by that? And Hillary Clinton after rambling for a few minutes, then said the following, she said, you’ve gotta be responsible for what you say and what you’re going to do. We need to rebuild trust in our fellow Americans and in our institutions. And if you promise the moon and you can’t deliver the moon, then that’s going to be the one more indicator of how you, you know, we just can’t trust each other.

So your issue with Bernie Sanders is that you can’t trust him, and he’s out there promising us the moon? Now, let me, let me just kind of clarify this real dang quick here. Bernie Sanders is promising us what almost every other industrialized country on this planet already has. And you mean to tell me with the wealth that America has, with the ingenuity that America has, with the fortitude America has, we can’t do what everybody else did? Wow, that’s a pretty crappy dig at America too there, Hillary. No wonder you have a 36% approval rating and you have the nerve to talk about trust, rebuilding the public trust. More people in this country trust Donald Trump than trust you. Okay? So you are by no means the authority on who we should or shouldn’t trust in this country. It gets so much worse, folks. She goes on, I want quality, affordable healthcare for everybody.

But let’s remember what’s at stake. We have a current president who’s trying to take away fundamental healthcare rights so we can have a big argument about ideally what kind of healthcare we should want for everybody because I’m on the front lines on that battle. But let’s remember if we don’t win, people will lose what they have right now. So I just want everybody to understand how high the stakes are and to hold every candidate and every public office holder accountable for what they do or they don’t do. First of all, you are not on the front lines of that battle. You on the front lines of the battle to make Hillary Clinton relevant again. That’s the only fight you’re fighting. You’re a bitter, angry entitled woman out there trashing the Democratic front runner while also you and your establishment types are out there telling us we should have unity. We shouldn’t be attacking each other. Yeah, you’re doing the attacking and then Martin O’Malley, I don’t know if anybody remembers that moron. But Martin O’Malley, who also ran as a dDmocratic contender in 2016 and didn’t make it very far at all, had the nerve this morning to tweet out that he is pretty dang sure he did more to help elect Hillary Clinton than Bernie Sanders ever did and he never asked to fly in a private jet like Bernie did.

Folks they are guns blazing right now to take down Bernie Sanders. And why? Well, because like I said, Hillary Clinton believed for a lot longer than just in 2016 that she was entitled to that White House. Not that she had earned it or that she deserved it, but that she was actually somehow entitled to it. Like that was her birthright and in her diluted, warped little mind, Bernie Sanders is the one who took that from her, even though he did more than 30 events for her. Went to places she refused to go as she met behind closed doors with millionaires and billionaires trying to bilk more money out of them. Bernie was out there in the streets. Bernie was out there talking to people on your behalf and you’re still out there trying to trash him. He is the Democratic front runner right now, folks. He is ahead in the polls and for her to say that he’s not a viable candidate, he does better against Trump in every single poll.

He does better against Trump in Florida, better against Trump in Wisconsin and he’s almost also beating Donald Trump in the state of Texas. It’s within striking distance in the margin of error. Bernie beats Trump, literally nobody else running on the Democratic side, as of right now in the polling, does. You want to talk about viability, then there’s only one candidate that you can talk about because it’s Bernie. Because he is the only one who stands any chance whatsoever, according to the data, of beating Donald Trump. But here’s the thing, Hillary and I have to point this out too, because you’re talking here about, well, you know, oh it’s great to have plans and ideas and we, you know, we can have those discussions. But let’s remember the most important thing is beating Trump. No, no it’s not. No, it’s actually not folks. It’s actually not. Because if you put somebody in that White House, even if they’re a Democrat who doesn’t change this country fundamentally, then no, beating Trump is not the most important thing. Those cages for those children down on the border, those didn’t start under Donald Trump. Biden was a part of that administration. So you think he’s going to come along and suddenly abolish those?

You need to think long and hard about that people. A lot of the problems we’re seeing under the Trump administration did not originate under him. And I’m not saying they originated under Democrats, but I am saying that some of the people running for president right now did absolutely nothing about some of the problems Trump has made worse. And I have no faith in any of them, other than Bernie Sanders, to actually go into that White House, do what they’ve promised to do, or at least prove that they’re trying to do what they promised to do and fundamentally change the direction of this country. Because anything short of that just paves the way for the next Trump in line, which is Don jr, to take over in 2024.