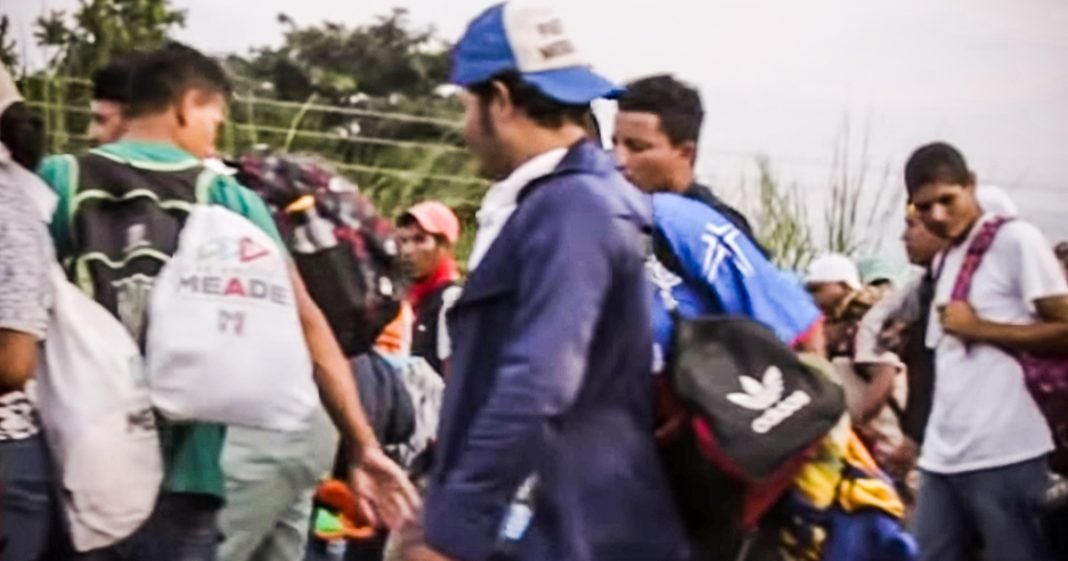 Donald Trump’s “tough on immigration” policies are getting people killed. According to a new report, the majority of migrants that were shipped back to the country of El Salvador were murdered, and many others were assaulted and tortured. The administration knew this would happen to these asylum seekers, but made the choice to send them home to die anyway. Ring of Fire’s Farron Cousins explains what’s happening.

According to a new report by Human Rights Watch, a majority of the migrants and asylum seekers that came to the United States from El Salvador, that the Trump administration then deported back to El Salvador were murdered. A majority of them were murdered. They came to this country seeking asylum. They told the United States government, our legal system, this administration, if you send me back, I’m going to die, and this country said, we don’t care. You’re going back. And now we know, yeah, they were right. They died. Human Rights Watch, basically followed 200 asylum seekers who were deported back to El Salvador. Of those 200, 138 have already been murdered. The remaining 62 have all, according to Human Rights Watch, every single one of them has either been tortured or raped.

There is not a single one that Human Rights Watch followed, that went back to El Salvador, and everything turned out okay. Not a single one of them. And that’s the thing, this administration knew this was going to happen. Our legal system, the courts that have to hear these asylum cases, they knew this was going to happen because the people told them this was going to happen. Thousands upon thousands of people are dying in El Salvador every single year because of the violence. These people just wanted to get away from it. They wanted to start over. They came to this country legally because seeking asylum is legal. They did not illegally smuggle themselves across a border. They didn’t hop a fence or try to ford a river, ford a river, excuse me. They, they came here legally. They did the right thing. They did everything the way that they were supposed to do it and then we said, to hell with you anyway, we don’t care about your arguments. We don’t care that you’re going to go home and possibly die. Boo hoo, get outta here, and then they died.

These are the kinds of things, these are the kinds of stories that should be bigger news. These are the kinds of stories that you should see plastered on CNN and MSNBC and ABC and every other network because this is a big deal. This is people being murdered as a direct result of the Trump administration’s anti-immigrant policies. But I’m willing to bet it gets no more than five minutes of coverage today, and that’s being way too generous. That’s probably more time than spend on climate change in a given week, but these are the stories that matter and the corporate media has done such a horrible job of telling us what’s actually happening. They’d rather focus on Nancy Pelosi ripping up a speech or Donald Trump doing his little victory lap. But believe it or not, folks, in the midst of Pelosi and Trump and hell, even the Iowa debacle, there’s real important news happening all over this country and the corporate media and a lot of independent media is absolutely failing to tell the public about it.