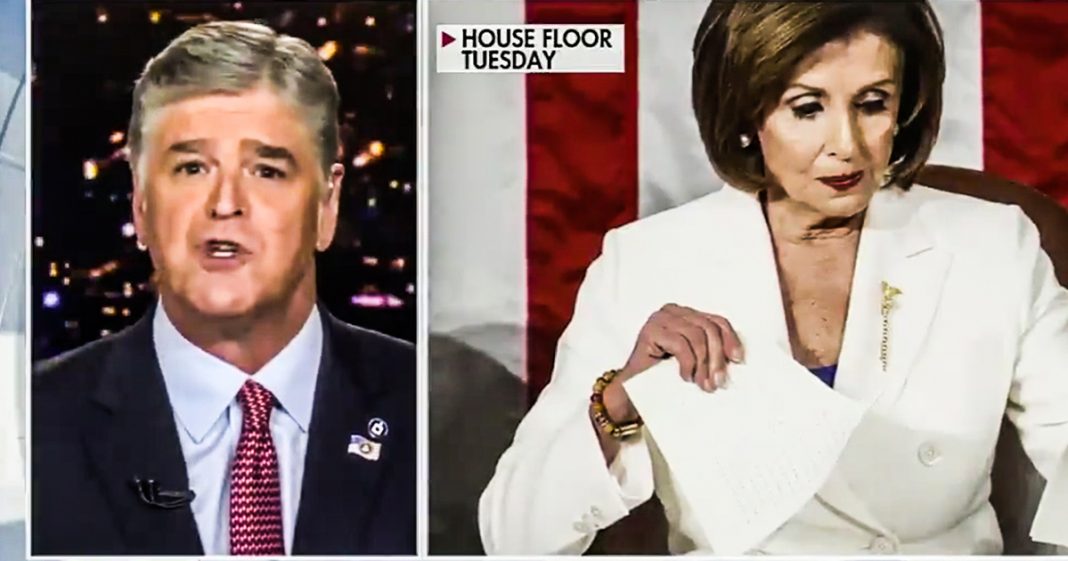 Sean Hannity probably needs to spend a little more time talking with his producers. If he did, he would probably avoid embarrassing moments like the one he had on Wednesday evening when he called for a clip that the producers didn’t even have a copy of. This shows that Hannity doesn’t spend time actually prepping for his show or conversing with his showrunners, as Ring of Fire’s Farron Cousins explains.

Well, Republicans are still freaking out over the fact that Nancy Pelosi ripped up Donald Trump’s state of the union address after the speech ended. And Sean Hannity last night was quick to point out that Republicans have already used this image of Pelosi ripping the papers in a powerful new campaign ad. But unfortunately for Hannity, they didn’t actually have the ad to play and Hannity came across looking like a giant idiot. Here’s what happened.

Sean Hannity:               And she was being courteous? And now in a brand new ad, Senate Republicans, they are highlighting, this ad, is it. This is one of the best ads I’ve ever seen. Pack of lies that Pelosi ripped to shreds. Take a look. Oh, by the way, apparently we don’t have it. Are we going to get it? Somebody tell me, some point, somewhere. Con, constitutional scholar, Jonathan Turley.

Yeah, it’s gotta be embarrassing, right? I mean, you’re the host of the most watched show on cable news and you call for a clip and dammit, you want that clip to play, but it just wasn’t there. Now, instead of talking about Pelosi and how Republicans are using this against her. I’m going to talk a little bit personally about Sean Hannity here because that clip actually tells us a whole heck of a lot about his personality and his relationship with the people who work underneath him. I have produced many TV shows in my day. Many radio shows, all kinds of things. Never once has a host that I have worked for called for something that we didn’t have. You know why? Because there was communication because we talked about things before the host went on the air. You know, the host didn’t segregate themselves from the rest of us thinking they were better than all of us and then going on air looking like an idiot because they didn’t take five seconds to run through what was happening on that day show with us.

That’s what that tells me about Sean Hannity. He was too good to talk to his staff. Now maybe I’m wrong, obviously I don’t work at Fox news. Never have, hopefully never will, but if he called for something then he assumed they would have it. If the producers and the engineers knew he was going to call for something, they would have had it. So there was no communication between the two there and that creates memorable television moments like we just saw from Sean Hannity. He didn’t know what was going on. His producers didn’t know what was going on and I guarantee you after that show ended somebody or every somebody that works on the Hannity program got chewed out by Sean. I mean that’s an inevitability at this point. He was likely furious. You could see his rage building up towards the end of that clip. He wasn’t happy and somebody’s going to pay for it and that’s probably to demoralize the entire staff after that.

But again, Sean Hannity is one of those guys who thinks he’s better than everyone else. He doesn’t have to go and talk to the producers. He doesn’t have to talk to the directors or the engineers or all the people making minimum wage while he’s making millions of dollars a year. No, he’s too good for that and I hope he continues to have that attitude because what it’s going to do is push away decent people. Let’s keep in mind, not everybody that works at Fox news is evil. That’s mostly resigned to the on air talent and the executives there. Those producers, the engineers, the directors, those are just people trying to get by, trying to make a living. Some of them just trying to get their feet wet. Maybe this is their first job in television and they want to take those skills and go somewhere else once they get enough experience. And Hannity doesn’t think he has to sit there and have conversations with them, discuss what graphics or video packages they do or do not have. But I can promise you every TV studio I’ve ever been in and every host I’ve ever worked with and host I’ve seen out of the corner of my eye, they talk to their staffs, they know what’s happening, and they don’t end up with stupid moments like Sean Hannity had last night.