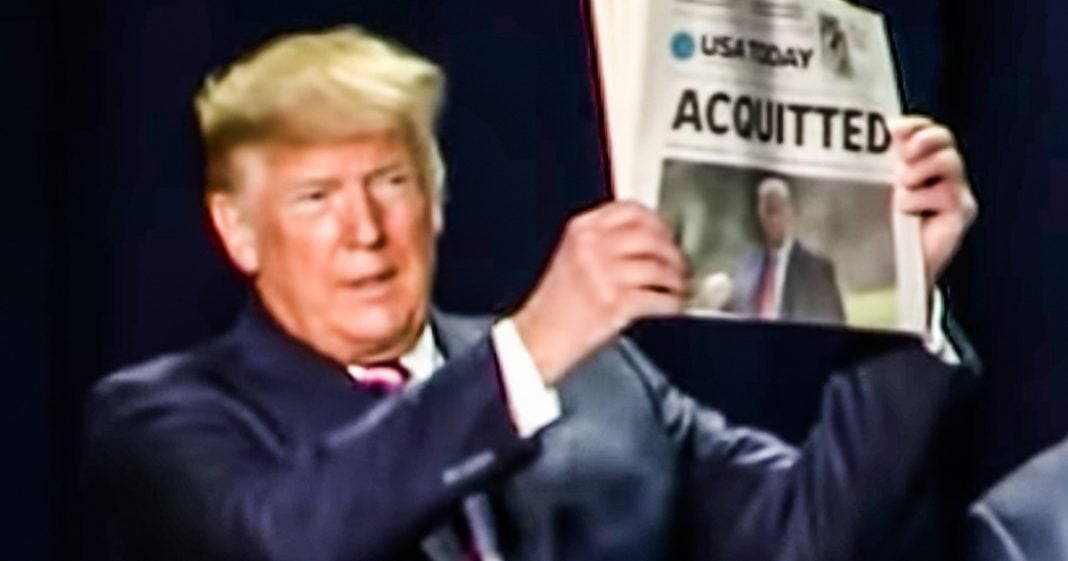 According to Democratic Senator Sherrod Brown, Republicans in the Senate are willing to admit that Trump is unfit for office, although they only do that in private. Brown made these comments in a New York Times op-ed, and the public pounced. But why? Does any of this even matter anymore? Republicans have shown that they’ll protect Trump at all costs, so op-eds like this don’t serve much of a purpose. Ring of Fire’s Farron Cousins discusses this.

Democratic Senator Sherrod Brown pinned in op-ed for the New York Times that ran yesterday where Brown stated that, Republican senators, you know, his colleagues in the Senate, they talk privately a lot about the fact that Donald Trump is unfit for office. In fact, this is exactly what Brown said. He said, in private, many of my colleagues agree that the president is reckless and unfit. They admit his lies and they acknowledge what he did was wrong. They know this president has done things Richard Nixon never did, and they know that more damning evidence is likely to come out.

Fantastic. So. Don’t get me wrong, I love Sherrod Brown. I think he is a wonderful Democratic Senator and to be honest, I was a little disappointed he didn’t throw his hat into the presidential ring. But this op-ed is a big so what? Right? We have seen reports from day one of this administration that, oh, behind the scenes, Republicans say they don’t like Trump. They vote with him all the time. They just voted to acquit him even though they admitted he committed crimes publicly, not even just in private, some publicly. So what good do these op-eds do? We know Republicans know that this guy is unfit, but at the same time he is delivering every part of the Republican agenda that they have ever wanted. So of course they’re not going to do anything about it. They’re going to sit there, hand him a new stack of right-wing judges to nominate.

He’ll nominate them, they’ll approve him, they’ll then hand him the next tax cut that they want, he’ll approve it. Then they’ll hand them the entitlement cuts they want to make. He’ll approve it and life goes on. They’ll tell him what regulations to cut and he’ll do it. He is their puppet, not the other way around. And that’s why they tend to defend him so much because he is a know nothing president. He didn’t come from politics. He doesn’t know how things work. And, you know, we have seen a lot from people over the years saying that Trump is the one pulling the strings on these Republican senators. But honestly folks, it’s backwards. They’re the ones pulling one over on him. They’re the ones telling him what to do because he has done nothing different than what any other Republican president would have done with the possible exception of the trade war.

Other than that, why would Republicans buck the system? We don’t need to hear what they say behind closed doors, I’m sure behind closed doors, some Democrats were talking bad about Obama and Republicans were talking about about Bush and Democrats were talking bad about Clinton and so on and so forth throughout all of history. We don’t need another op-ed telling us and then Sharrod Brown goes on and makes another horrible point where he says, history does not look kindly on politicians who cannot fathom a fate worse than losing an upcoming election. That’s simply not true. That’s simply not true. Members of the George W. Bush administration, you know, the ones who illegally spied on American citizens. The ones who launched a war based on lies, killing hundreds of thousands of Iraqis, thousands of us troops, all based on lies. The ones who illegally tortured detainees who had not been accused of any crimes. Yeah, remember those folks? Remember how we thought back then, oh, history is going to torch these folks? They’re doing fine. Every one of them is doing fine.

The lawyers who wrote those legal memos justifying torture, they got cushy huge contracts at multibillion dollar defense law firms. They’re doing fine. Condoleezza Rice is heavily involved in college football now. So yeah, her career’s just fine. George W. Bush’s image has been rehabilitated because he gave a Michelle Obama some candy and watched a football game with Ellen. History forgets a lot faster than we think it does, and it’s a hell of a lot kinder to criminals, including war criminals, than we’d like it to be. So let’s stop making the argument that history is not going to be kind to these people because no, if there’s one thing history is capable of, it’s white washing somebody’s activities to make them look better than they actually are.