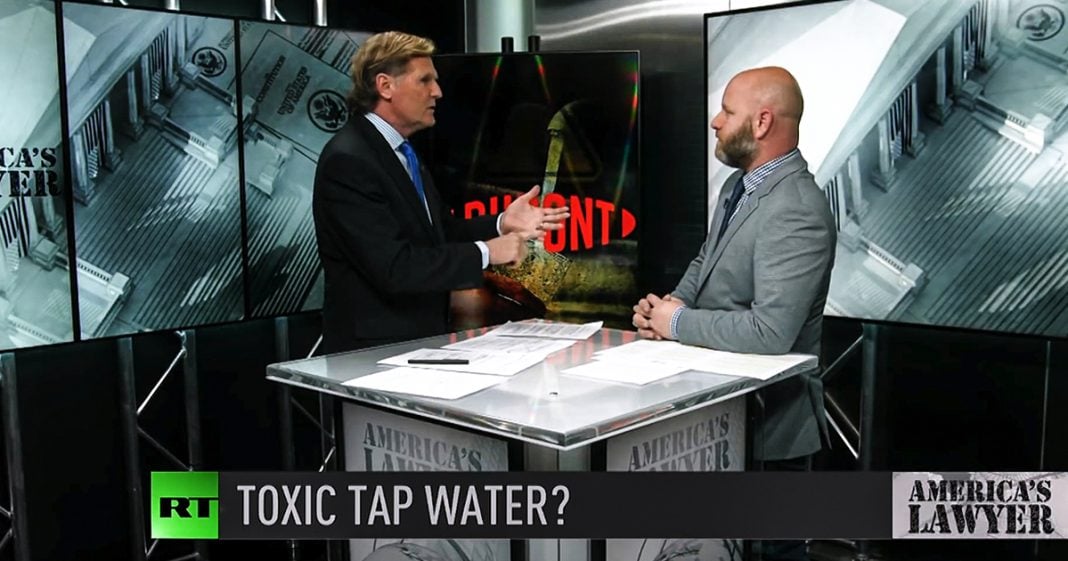 Via America’s Lawyer: Mike Papantonio and Trial Lawyer Magazine editor Farron Cousins rip open industrial giants like 3M and DuPont after studies have shown PFAS chemicals from companies like these have seeped into ‘virtually all major drinking water sources’ in the United States.

Mike Papantonio:             New studies have been proven that American citizens had been drinking tap water that’s been poisoned by DuPont and 3M and other corporate giants. Joining me to talk about this is Farron Cousins from the trial lawyer magazine. Farron, you know, I tried the first, I tried the first C8 cases ever tried in America up in Ohio, but now we’re finding that that was really the tip of the iceberg. Right? 3M is involved, DuPont’s involved, this is a huge story that’s just started to evolve, isn’t it?

Farron Cousins:                  Right. These, these chemicals that they’re finding in, in quite literally all of the water across the United States except for a few different locations, is contaminated with chemicals called PFOA’s and PFAS’s. And what these are, these are those micro chemicals that you, you found in the creation of C8 with DuPont and 3M and they get into the human body. They wreak all sorts of havoc, cancers, liver failure, fetal problems and they stay in the body. Bio-persistent is what they call them. They stay in the body, they build up over time causing all these problems. And, you know, a couple of years ago it seemed like, all right, this is a major problem for DuPont and 3M because they’ve poisoned the Ohio River Valley with this, but this case actually got people wondering how far, how widespread is this? And now we’re finding it’s everywhere and it’s not just these companies. These are two of the biggest and baddest.

Mike Papantonio:             Okay. This, the documents that I used in trial in the DuPont case that was tried up in the Ohio River Valley showed that 3M saw, they, they did a series of monkey studies and the monkey studies virtually, well, all of the monkeys died. Every, every monkey that they, that they put in contact with these products died. It was so bad that 3m made the decision, we’re not going to make this stuff anymore. Of course this is after they put billions of gallons all over the world. It’s already in the water system. It’s already in the environment. But then they say, well, we’re going to stop making it because the monkey studies show that this stuff will kill you. It also showed 3M also knew that once it’s put in the environment, it stays there for at least 1 million years. So let’s say we can clean up the drinking facilities all over this country. It never goes away because the next rain, the next storm that comes on, it again contaminates the facilities. Right?

Farron Cousins:                  Right. And the latest study shows that you probably would not be able to find a person living inside the United States right now today that does not have a detectable amount of PFAS or PFOA’s in their body. I mean, this thing is so prevalent, they’re finding it in polar bears that live in remote regions that have never seen a human being in their life. It’s in their bodies too, because it’s in the oceans. You know, it’s in the runoff from the streams and it gets in the fish. This, it’s everywhere and it is absolutely killing people.

Mike Papantonio:             Okay. Now we put this case in front of five juries so far, every one of the juries has said, yes, it’s dangerous. Yes, it will cause cancer. It doesn’t just cause cancer, it causes birth defects. It causes gastrointestinal issues that are life threatening. This is very bad stuff. So here’s where I land this story. If there’s people out there that are in charge of water facilities, in other words, people’s drinking water is determined by that person who’s in charge of a drinking facility. They know exactly, they do the testing and if they’re finding C8 in their drinking water and the standards of 70 parts per trillion is ridiculous. The, the very manufacturers of this said, of this product said, that one part per billion, not per trillion, one drop per, per billion will cause these physical issues. The, to give you an example of what that is, that’s one drop inside an Olympic size swimming pool. That’s the people that used it and made it, they said that’s what scares us. If it exceeds that, we’re going to have a problem. So this story has just started, hasn’t it?

Farron Cousins:                  Well, and, you know, you talk about the, the water supply systems and the people in charge of that. The only area they tested where they didn’t find any of these chemicals was in an area Meridian, Mississippi because they had dug their water wells down over 700 feet.