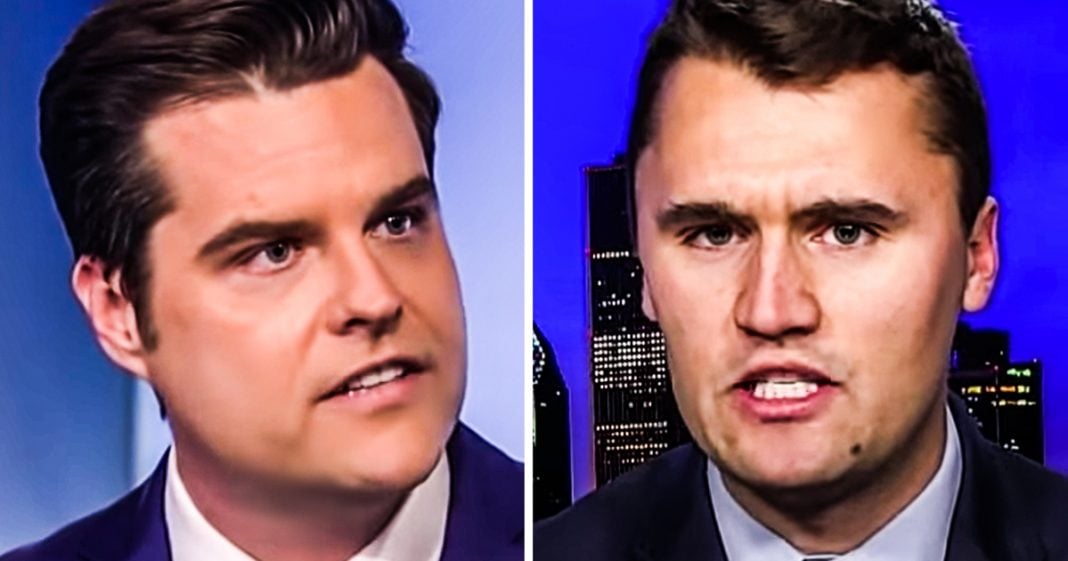 Republican Representative Matt Gaetz has filed an ethics complaint against Nancy Pelosi because he believes that she broke the law by ripping her copy of Trump’s State of the Union address. Gaetz is apparently under the belief that Turning Point USA founder Charlie Kirk knew what he was talking about when he tweeted that Pelosi broke the law and decided to act on Kirk’s idiotic tweet. Ring of Fire’s Farron Cousins explains what’s happening.

A few weeks ago, we told you about the fact that after Matt Gaetz voted to reign in Donald Trump’s war powers, the White House stopped taking his calls. They wanted nothing to do with Matt Gaetz and really were pretty much showing us that they only value loyalty. And Matt Gaetz received that message loud and clear because Matt Gaetz, late yesterday evening, announced the following on Twitter. Breaking, I’m filing an ethics complaint against speaker Pelosi for destroying Donald Trump’s state of the union speech. Her conduct was beneath the dignity of the House and a potential violation of law 18 US code 2071. Nobody is above the law and she must be held accountable. Nobody’s above the law, you say, Matt Gaetz, right? Right? That’s why you were punished for your DUI. That’s why Donald Trump was punished for breaking the law. And you’re going to freak out over Nancy Pelosi ripping up a speech and say that somehow that is illegal? So why would Matt Gaetz, a lawyer, actually thinks such a stupid thing is illegal? Well, it’s likely because a little bit earlier in the evening, Charlie Kirk, a founder of Turning Point USA, tweeted out the following, he said, Nancy Pelosi may have just committed a violation of 18 US code 2071 section 2071A when she ripped up president Trump’s state of the union address.

So Gaetz goes and he quotes the same US code that Charlie Kirk has tweeted out and Gaetz says, you know what? I’m going to, I’m going to file an ethics complaint. We’re going to take her down Charlie. Me and you Chuck, all the way, thanks for the advice. And then the real lawyers came out and they said, that’s not what the law calls for. Maybe you should try reading it, guys, because the law says that you cannot destroy any official government document or presidential record in your custody. Right? And these morons, Kirk and Gaetz didn’t understand what in their custody means. In their custody does not just mean that you have it. It means that you, by a power of authority, were entrusted to protect the document. That is what custody means, in this sense, not just that you got a copy of it, but that you got the copy of it and it is your sworn duty to protect it.

Every single legal scholar that spoke to PolitiFact about the issue said, yeah, Pelosi’s in the clear. That document was not in her custody. It was not submitted to her. It was not something that she had to file. It a frigging photo copy of the president’s speech. She can rip it up, she can do whatever she wants with it. She could have used it as toilet paper following that speech for all she cared. But none of it would’ve been illegal. And here we have Matt Gaetz who’s trying to get back on Donald Trump’s good side by filing this insane ethics complaint against Nancy Pelosi. You know, I don’t care that Nancy Pelosi ripped up the speech. I’d have been fine if she did and fine if she didn’t. I do think it was an empty symbolic gesture much like last year’s very sarcastic clap. And yeah, it doesn’t serve any purpose other than to get Republicans all riled up.

But we’ve got to be a little bit better than that as a country and as a party, right? We’re not just the party of trolls. We’re going to sarcastically clap for you or rip up your paper behind your back and ooh, we got ya. No, we need to be focusing on policy and not stupid talk like a snubbed handshake or a ripping of paper, but Matt Gaetz wants to keep this issue alive. Republicans are already using this image in a new ad they’re running across the country and they’re going to try to do their best to keep it alive. And honestly, I hope they do because people are going to get sick of this. Nobody cares that Nancy Pelosi ripped up a piece of paper. And more importantly, the law says she had every right to rip the paper in half.