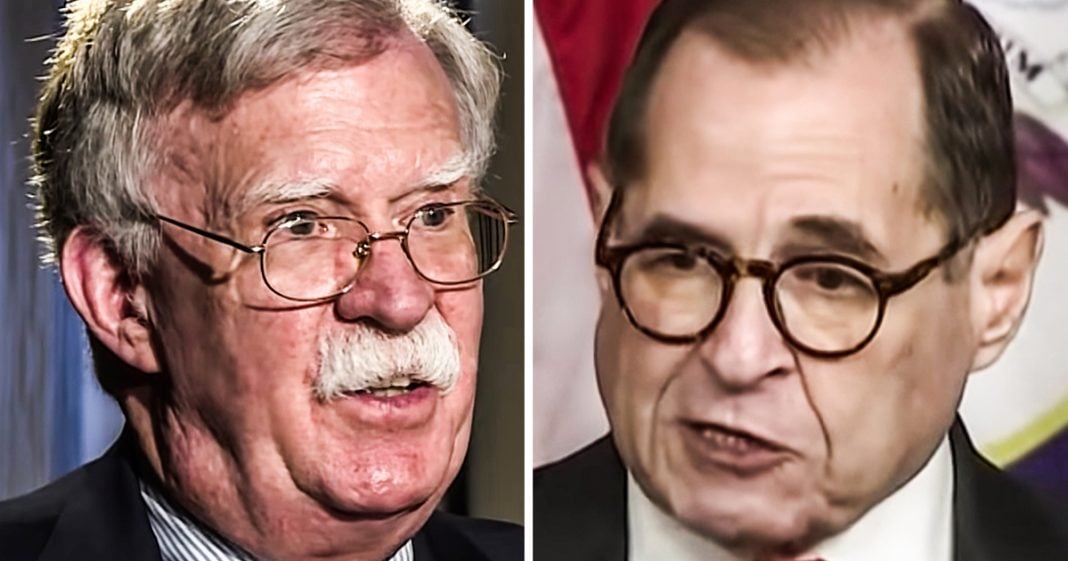 Democrats in the House of Representatives aren’t finished with Trump yet, and Jerrold Nadler told CNN that it is still likely that they will call John Bolton to testify about the Ukraine scandal. This is a smart move by the Democrats, even if it doesn’t lead to anything in terms of punishment for Trump. The President broke the law and there are people willing to corroborate this story, so let’s get them on the record as soon as possible. Ring of Fire’s Farron Cousins discusses this.

Well folks, every now and then, I got to admit when I got one wrong and with impeachment in the Senate, I gotta admit I got it wrong. I didn’t think for a second that a single Republican was going to vote to convict Donald Trump, but Mitt Romney came out and surprised us all. I was also fairly shocked that Joe Manchin and Doug Jones also voted for conviction. Now, yes, they’re both Democrats, but they’re very conservative Democrats and I didn’t think they were going to do it. So yes, I guess I was wrong about that. But as for the overall outcome, nope, we were right. Republicans acquitted, even though they said he definitely did stuff wrong, they just simply don’t care. So now what? It’s overm right? Impeachment is done for. The investigation’s kind of yielded nothing, for the Republicans. We know they yielded evidence that Donald Trump broke the law. That’s a given.

So what do the Democrats do now? Well, according to a house judiciary chairman, Jerrold Nadler, they’re going to keep on going with it. And they are likely, according to what Nadler told CNN, to subpoena John Bolton to have him come testify in the House about what he knew about the whole Ukraine scandal. I do support this move. I think it’s important that Democrats do move on overall from the issue, right? We know it’s not going to end with the results that they wanted to. The public is already turning on them on this issue, but it is important for this country to get John Bolton on the congressional record so that his words live forever. That’s the important thing because we know what Bolton is going to go out there and say, because we’ve already seen the excerpts from his manuscript. He believes Donald Trump broke the law.

He knows that Donald Trump directed the withholding of the aid to Ukraine because he wanted them to announce an investigation into Biden. That’s what happened, according to John Bolton. Republicans knew this information. They still voted to acquit him. But this is information right now that’s just in a book, right? Most people aren’t going to read the book. Most people have already forgot what John Bolton even had to say, but if you can get it into the congressional record, it lives forever. That doesn’t mean we’re going to celebrate John Bolton day every year and read his testimony, but what it does mean is that a hundred years from now, assuming this country is still standing, it’s going to be available for lawmakers to go back and review and to look at and for historians to see, and that is what’s important. Not saying that it’s going to change history’s opinion of Donald Trump, but it is something that forever will be an asterisk by his name. And that is why John Bolton testifying is important and I do support this move by the Democrats.

What I do not think they should do is make this into the whole spectacle that the impeachment was. The public moved on. The Democrats also have to move on, and I know they’re still passing bills, they’re still doing great things, but the public doesn’t know that and that’s the problem. The public does not pay as much attention to what’s happening as I do, or you do watching this video, you’re in the know. You do pay attention. The rest of the public doesn’t. So in order to avoid the Donald Trump, do nothing Democrat title, Democrats need to make sure that people know that they have sent several hundred bills to the Senate that are just collecting dust on Mitch McConnell’s desk. They need people to see that they’re sitting there having real conversations in Congress that aren’t about impeachment. And yes, those conversations have been happening throughout all of this, but we didn’t get to see them. And that’s the point I’m trying to make here. They have to make this a little bit more public, make the investigations into Trump maybe a little less public so that everyone in this country knows, without a doubt, the Democrats are still getting things done while also seeking the truth from Trump’s henchmen. That is how you move forward after impeachment.