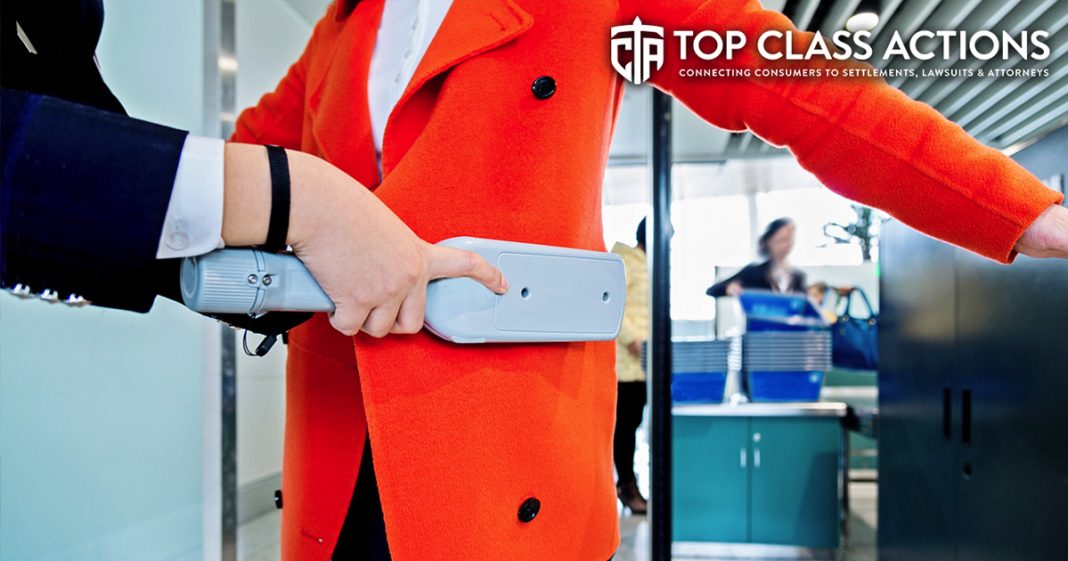 A class action lawsuit has been filed against the Transportation Security Administration (TSA) and the Drug Enforcement Agency (DEA) by airline flyers who claim the agencies unlawfully seized a family’s life savings without cause. Plaintiffs Rebecca Brown and her father August Terrence “Terry” Rolin say that the TSA and DEA took $82,373 from Brown, after Rolin gave her the money to pay for his medical and healthcare costs, according to the TSA class action lawsuit. Ring of Fire’s Farron Cousins discusses this with Scott Hardy, President of Top Class Actions.

Farron Cousins:                  No offense to TSA agents across the country, but nobody likes the TSA, right? We don’t like having to wait in those lines and take our shoes off and put our bags or, or devices bigger than a cell phone in a separate container. It’s confusing, it’s annoying, and the people working in the TSA tend to not be the happiest people ever and who could blame them for that. But aside from just the minor inconveniences of the TSA, a new class action lawsuit is claiming that some agents have been working with the DEA, resulting in cash being confiscated, essentially stolen from airline passengers. One plaintiff in particular says that more than $80,000 was confiscated from her because of the TSA reporting it to the DEA. Joining me now to talk about this is Scott Hardy with Top Class Actions. Scott, this is a truly disturbing story here and I don’t want to give it away, so I’m going to let you tell us what happened with this particular plaintiff. Again, absolutely disgusting what they did to her here.

Scott Hardy:                          Right. So this plaintiff met with her family. She had $82,373 from her father that was supposed to cover medical and healthcare costs. She’s taking this cash back with her so that way they can, you know, they can start planning how to use it for all these medical and healthcare costs. She gets stopped. The TSA agent sees the cash, they call a state trooper on her. State trooper walks over there, questions her on it, but was allowed to go. Then at the gate, the state trooper, the TSA had called the DEA. A DEA agent meets her at the gate, stops her, takes the money, says it’s suspicious. Now this is a, and for the record, she hasn’t gotten the money back yet even though it’s legitimate. She’s having a fight for her money and we see this being reported all across the US for, by, by City and State and County governments that pull people over that have a large amount of cash on them because they will say, oh, this is for drugs.

You’re trying to, you know, buy drugs or these are profits from drugs. But the folks that have this cash are typically lower income. There are poor, in this case, you know, they’ve got all of this cash, the life savings from her dad because they don’t trust banks. You know, they might’ve had credit problems, so they just been putting this cash away for years and they get pulled over and all of a sudden they, they, they lose this as a civil forfeiture. Now unbelievably, this complaint says the TSA has seized more than $2 billion in currency from passengers between 2009 and 2013, $2 billion. Now some that is probably, you know, legal forfeitures that they, you know, they’re doing their jobs. But, some of it isn’t. In this case, you know, that $82,000, that was just the life savings of one person that now they have to fight to get back.

Because that’s the problem with the civil forfeiture law is that you can’t just, they take it and they can’t. It’s not, you know, guilty until proven, you know, innocent until proven guilty. No, it’s guilty until proven innocent. You have to prove, this is my money, this is how I’ve saved it and this is how I’m going to get it back. The State and the federal government does not have to prove that you did something illegal. They can just hold onto it unless you can somehow prove that this is really your money and that you weren’t doing anything illegal to get it back.

Farron Cousins:                  See that, that to me is just one of the craziest things about civil forfeiture, not just in this particular case, but, but in these other cases too. You know, she, yeah, she had little over $82,000 on her. DEA agent walks up, says, all right, I’m going to take the cash and you go get on your flight now, you can go. That, that’s it. She wasn’t charged with anything. She was not arrested. She wasn’t even technically accused of anything. They just thought you’re walking around with a lot of money and we find that a little suspicious because sometime in the past, bad people had walked around with a lot of money. So obviously this is not good money for you to have. Let me keep that for a while or forever, really, and you go be on your way. That, that, that’s crazy. It’s crazy that we allow that to even happen in this country. But I will say just anecdotally here, I, I’ve worked at several different restaurants, you know, in my college years and there wasn’t a single restaurant I worked at where there wasn’t at least one person who had a story about leaving work. Usually two or three in the morning when we’d get off, they’d have all their tips there, you know, a couple hundred bucks.

And every one of them who told the story the same, they had had a cop confiscate it because you don’t look like somebody who should be driving around with $400 sitting in your center console. I’m confiscating that. This, this is common, this, this happens all over the country and it happens in small amounts and in this case, the $82,000, large amounts. And unfortunately for a lot of people who have this happen, there’s not a whole lot they can do or the amount of money that was stolen from them is too small to even fight to get back because you’ll pay more than that just in court fees to go and argue your case here. And I, and I think these, these agents know it, right? They know what they’re doing. They know that people who can’t necessarily always fight to get this money back so they get to pocket it. It goes to police departments, it goes to the federal government. They get to have it as their play money. But back to this particular case, when you have the TSA who called the DEA, the TSA is not even allowed to do that. The TSA is legally only allowed to investigate something related to the safety of a flight. And this woman carrying $82,000 clearly was not a danger to that flight, was she?

Scott Hardy:                          Exactly. She wasn’t a danger. She was questioned by the Pennsylvania state trooper. She was released and then the DEA stuck their nose in it and went ahead and confiscated that money. And as you said, when these folks get this money confiscated, this could very well be their life savings. They don’t have anything else. So how are they going to go talk to a lawyer and pay a $2000, $3000, $4000, $5,000 retainer to try to get that money back? You know, if these folks are confiscating and it happens a lot, just like you said, $1000, $2000, $5000, $10000 gets picked up and confiscated that they don’t have a way of, of fighting. You know, they don’t have our means, you know, my means when I can call any one of the lawyers and say, hey, look what the heck just happened. Get it back. Whatever it takes, get it back. They can’t do that. They’re just stuck. Which is why we have billions of dollars floating around where, frankly, it should have never been picked up in the first place.

Farron Cousins:                  Absolutely. For more information on this issue, if this is something that has happened to you or anyone you know, please follow the link in the description of this video, head over to Top Class Actions. And of course while you’re there, make sure you sign up for their weekly newsletter. Scott Hardy with Top Class Actions, thank you very much for talking with us today.