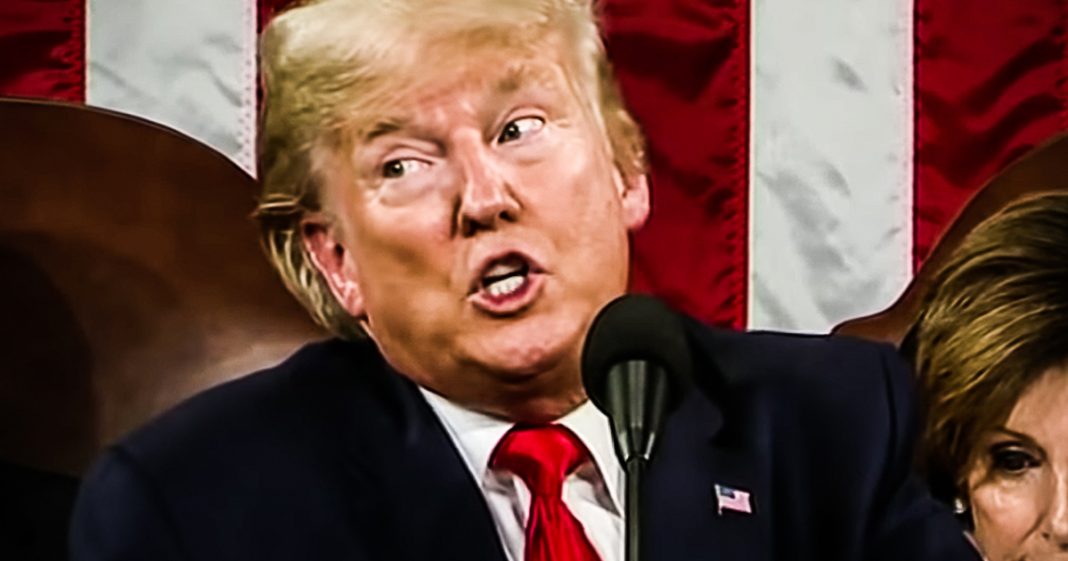 It may be too early to tell, but by at least one measure the Democrats’ impeachment strategy appears to have backfired. Donald Trump now has the highest approval rating of his presidency, hitting 49% in the polls. This is bad news for the Democrats as we inch closer to November, and Republicans will be taking plenty of victory laps between now and the election. Ring of Fire’s Farron Cousins explains what’s happening.

You know, it feels like only yesterday I was sitting here talking about all the horrible poll numbers that were coming up for Donald Trump. I mean, we had more than 60% of people in this country who supported his conviction and removal from office. You know, a, his approval rating was hovering down in the very low forties and sometimes the high thirties everything was looking bad for Donald Trump until now. According to a new poll released yesterday by Gallup, Donald Trump now has the highest approval rating that he has had since he was sworn in as president of the United States. Now, that approval rating is still just 49% he has not yet been able to crack that 50% but 49% of people in this country, according to this latest poll that was taken during the Senate’s sham impeachment trial, 49% said, yeah, I, I approve of the job he did.

Now, here’s the thing. The support among registered Republicans increased by 6% it’s now up to 94% approval for Donald Trump with Republicans. That’s not surprising at all. Right? Here’s the scary part. He is up five percentage points since the first week of January with independent voters. That’s terrifying. That is absolutely not good news. He is at 42% right now with independence 49% overall, and that’s actually higher than George W. Bush. His approval rating when he beat John Kerry in the 2004 presidential election, these numbers are terrifying for anybody who says their goal is just to beat Donald Trump in November. And part of the reason why these poll numbers have increased is because of the impeachment trial. The public lost interest in it, you know, yes, the Republicans rigged the whole thing so that the public would lose interest in it. But it did. According to this poll work out in Donald Trump’s favor, um, the latest numbers, we had only a a 52% who said that they do not support Donald Trump’s removal from office. Now, only 46% said they do support it. That number dropped by about 20 points in two weeks, 20 points in two weeks. This impeachment momentum has ended for the Democrats and unfortunately picked up for Donald Trump. This is very bad.

As I have said repeatedly, the Democrats screwed this up. Yeah. Adam Schiff has gone over to the Senate and he’s made some firing awesome speeches about how corrupt and horrible Donald Trump is. Clearly the public didn’t care, but more importantly, independent voters didn’t care and at the end of the day they gained more sympathy for Donald Trump.

Most of the public want him removed from office now and yeah, most of that is because the Republican’s rigged everything. I get that I’m not just trying to sit here and talk crap about the Democrats all day, but you have to acknowledge their failures in this particular endeavor. They impeached him in the house of representatives because he attacked Joe Biden. That’s what this was. They could have gone after him for his unlawful detention of migrant children along our Southern border. They could have gone after him for all of those financial crimes that Michael Cohen implicated him and during his testimony they could have gone after him for just blanket obstruction of justice mentioned in the Mueller report and with all the subpoenas for the actual impeachment that he refused to comply with the subpoenas he refuses to comply with, to hand over his financial records. Any one of those.

All of those are crimes that the public, yes, they can understand. They know that these things are wrong, but instead you went with a quid pro quo because the guy wanted to go after Joe Biden and the Democrats in the house wanted to protect Joe Biden. They rushed through it. They didn’t wait for the courts to say, yes, you have to comply with subpoenas. They said, well, to hell with it, we think we’ve got enough info. Anyway, we’ll go ahead and vote on these articles and just sit on them for a few weeks and then we’ll finally send them over to the Senate. Even though we gained nothing from that and it all happened too soon. It’s over. Donald Trump is about to take his victory lap around this country, a victory lap that is going to last until November, at which point it may be replaced by an even bigger victory lap.

At this point, because of the failures of the Democrats and the obstruction of the Republicans, the two of them together, Republicans and Democrats created the perfect storm to allow Donald Trump to ascend to power and to retain that power. This is bipartisan failure by both parties at this point, folks, yes, the Democrats screwed up because they weren’t competent. The Republicans did it because they were corrupt, but when, those are our two choices right now in competency or corruption, that doesn’t say much about the future of this country, does it? It shouldn’t leave us feeling optimistic at all. The only person who feels optimistic right now is Donald Trump, who is about to be acquitted today and then he’s going to travel this country attacking the Democrats, saying that they had nothing again, even though Republicans rigged the whole thing, the public’s not going to remember that. They’re just going to remember that Trump wasn’t removed from office, so he must not have done anything wrong. And if you think I’m kidding, the poll numbers are already proving me right.