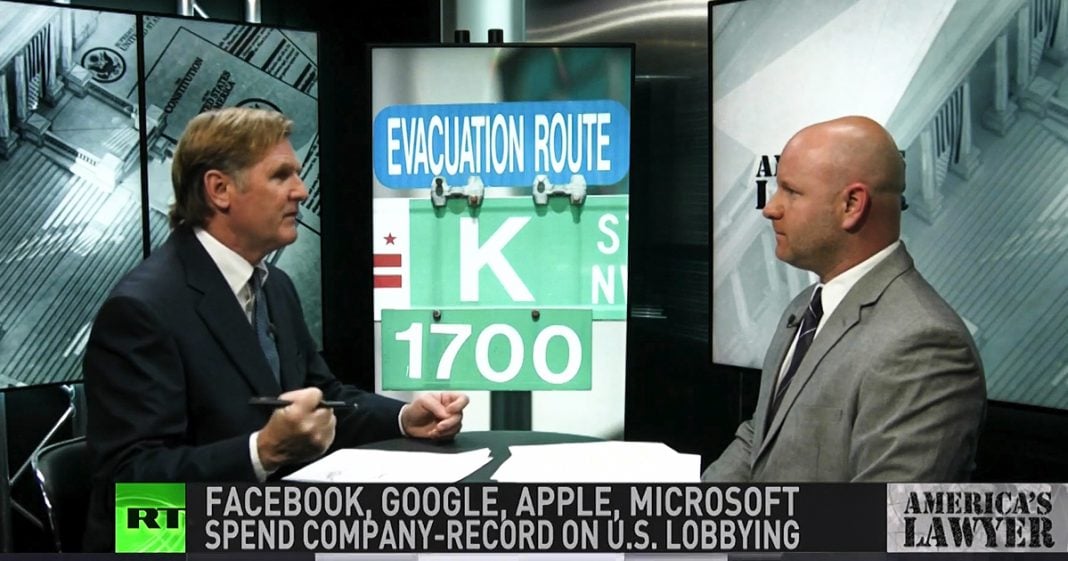 Via America’s Lawyer: Tech giants like Facebook and Google have increased their lobbying efforts as they try to avoid any new regulations for their corrupt industries. Mike Papantonio and Trial Magazine Executive Editor Farron Cousins discuss more. Also, RT Correspondent Brigida Santos joins Mike Papantonio to talk about the Supreme Court overturning a Circuit Court of Appeals decision on equal pay due to the Judge’s death, citing that Federal judges are appointed for life, and not for eternity.

Mike Papantonio:             Tech giants like Facebook and Google have increased their lobbying efforts as they try to avoid any new regulations for their corrupt industries. And so what’s happening, I mean, you know, look, would you ever think of Google or Facebook as the term corrupt? You’re seeing it all the time. I mean, that’s just not us saying that, you’re seeing it in the general media. But 15 years ago you never would have said, you would have never associated the word corrupt with those two industries, but right now they feel like they have such a problem that you’ve got, you’ve got them spending $20 million, $15 million, $8 million, $18 million a year just to lobby to overcome the attack that they’re under. What’s your take on it?

Farron Cousins:                  I mean, just to point out, imagine somebody waking up from a 10 year coma today and turning this on, saying what? What’s wrong with Facebook? But, but it is that and they understand it as does Google as does Microsoft and Apple. That’s why all of their totals in lobbying for the last year have gone up. They understand that law makers from both sides of the aisle, this is a good bipartisan issue that they’re trying to work on here.

Farron Cousins:                  They know that, listen, they’re gonna hit us with these antitrust laws because, because you know, I’m Facebook. I’m a social media site. I’m a news organization now. I’m an advertising agency. I am everything and that can’t exist under antitrust laws.

Mike Papantonio:             Where, where you’ve got, you’ve got these, you’ve got these folks that are putting people out of business all over America right now for one thing or another. They’re, one thing we’re really seeing is the, the news industry is going bust. I mean, you’ve got Gannett laying off people by the hundreds. You’ve got a Buzzfeed great example. You’ve got Yahoo trying to figure out how are they going to hold on to the industry that they have. They really can’t because you’ve got, you’ve got Google and Facebook gobbling up and Amazon gobbling up so much of the market out there. So I, you know, as I look at this, there’s two things they want to accomplish. When I talk about Google, I talk about Facebook or, or Microsoft. Microsoft, don’t forget Microsoft is, you know, owns part of MSNBC.

So what, what we’re, what we’re looking at is we’re looking at not just them fighting antitrust, they’re fighting any effort to, to move towards regulatory at all. They will, they don’t want regulatory to come in and have anything to do with this. And I thought this is interesting. Maybe you can answer this real quickly. They say we have to spend money lobbying, lobbying, and the question then becomes what is it that they’re lobbying? What is it that they’re trying to accomplish? And the answer is obvious. We want to be bigger, we want to make more profits. And the old days of us being something that’s so integral to social media is quickly disappearing.

Mike Papantonio:             The supreme court has thrown out an appeals court ruling in favor of a woman’s equal pay claim against a California Superintendent because the liberal judge who authored the decision died before it was actually issued. RT correspondent Brigida Santos joins me now with the story. Brigida, tell us more about this unanimous ninth circuit ruling where they say, well, gee, he died before it came into effect. Therefore we’re, we’re going to reverse it. I, it’s interesting precedent. Go ahead.

Brigida Santos:                   Very, very interesting Mike. Now on Monday, the Supreme Court tossed out a 2018 ruling from the Ninth Circuit Court of Appeals finding that employers cannot use a worker’s prior salary to justify paying women less than men. That lawsuit was filed by a female teacher from Fresno against her superintendent after she found out that she was being paid less than her male counterparts. Now the reason this decision was tossed out this week is because judge Stephen Reinhardt, who wrote the opinion died 11 days before the ruling was actually issued. Reinhardt’s vote contributed to the six five majority to uphold the 1963 equal pay act, which abolished wage discrimination based on sex.

In his opinion, Reinhardt disagreed with the superintendent’s claims that prior wages aren’t solely based on sex, but in combination with other factors stating, “allowing employers to capitalize on the persistence of the wage gap and perpetuate that gap would be contrary to the text and history of the equal pay act. And it would weaken the very purpose for which the act stands.”

Mike Papantonio:             Okay, here’s a judge that heard the facts, listened to all the substantive evidence. Obviously he’s been on the bench awhile. This, you know, he wasn’t just appointed and died. He’s been there awhile, an experienced judge. A judge and, and the, the, the thing that bothers me is, is the precedent that’s created in this, first of all, it’s an important decision. This is not a minor decision by some, by some, judge out in the wilderness. This is an important decision. Is the standard procedure for the court to throw out a pending ruling when a judge dies? Is that, is that the norm in California?

Brigida Santos:                   Well, it is now. In fact, prior to this decision, the court hadn’t yet determined whether a judges vote can count if he or she decides, dies before a ruling that they participated in is announced. Now, as you said, even though the Ninth Circuit Court of Appeals said that the 2018 opinion was final and that voting was finished before Reinhardt’s death, the court is tossing the decision out because it wasn’t endorsed by a majority of living judges at the time of issuance. Now, since judges can change their opinions up until the very last minute, the court has determined that opinions issued after death should not count. So this issue of how to proceed in that manner has now been settled and as you said, this is very important precedent. It’s a question that’s been on these judges’ minds since 2016 when Justice Antonin Scalia died at that time. The Supreme Court also decided not to issue rulings in several pending cases that he had been involved in.

Mike Papantonio:             For just now the economy of justice, now it’s, we’ve got to hear it again. There has to, this whole process has to take over again. A new judge has to, new judge has to hear it. We have to spend the money going through the same process because of this hyper technical notion that the ninth circuit has in their head. Where does the equal, more importantly, more important, where does the equal pay claim go from here? I mean we started, we started back with square one again on a case that again is extremely important because it has to do with the way Americans are paid. We don’t treat people different according to gender. So, so what, what’s your take on where the where this claim goes now?

Brigida Santos:                   Well, it does go back to the ninth circuit to be decided without Reinhardt and as you’ve said, it’s up in the air right now. We have a majority conservative supreme court. Now again, this is in the court of appeals, so they’re going to have the final word on this, so we’ll have to wait and see what happens. But it is going to be a big deal.

Mike Papantonio:             The interesting thing to me about this is you, this is the ninth circuit. This is regarded across the country, as certainly one of the more liberal circuits in, in America. And I’m interested in seeing this kind of ruling coming out of them. I guess maybe they’re of the opinion that, gee, when it’s tried again. When we, when we analyze it again, when the facts are before substantively again we’re going to, going to come up, we’re going to come up with the same decision. But it’s interesting. It’ll be interesting to find out. Brigida, thank you.