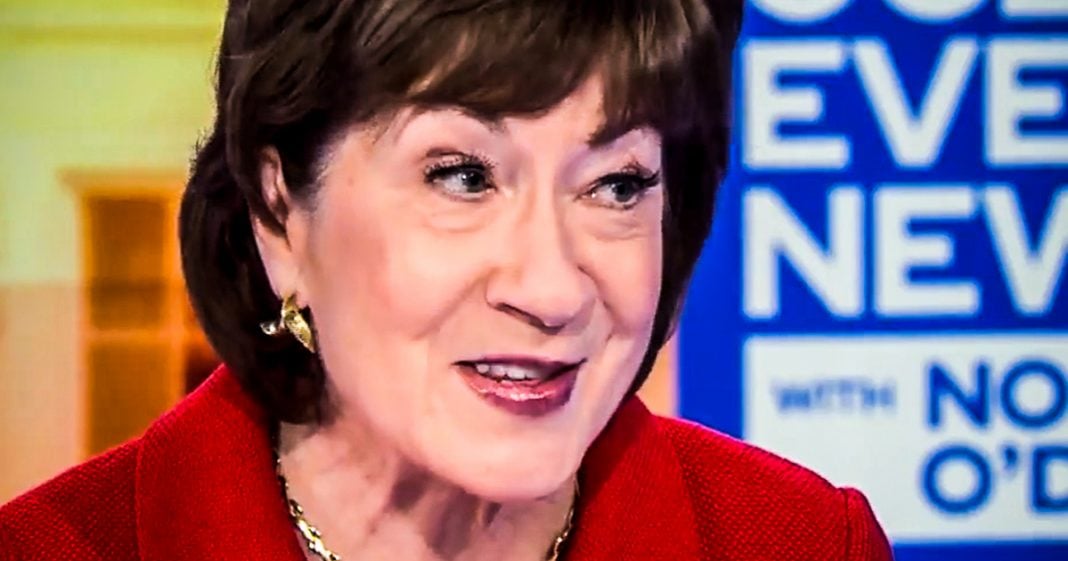 Republican Senator Susan Collins defended her decision to vote to acquit Donald Trump in the impeachment trial by claiming that the President has “learned his lesson” and that he’ll behave from now on. Collins seems to believe that because the President acts like a toddler then he can be punished like one, but that’s not how this whole thing works. Ring of Fire’s Farron Cousins discusses this.

During an interview with CBS news yesterday, Republican Senator Susan Collins explained why she today was going to vote to acquit Donald Trump. And according to Susan Collins, she wants to acquit Donald Trump because she believes he is totally learned his lesson. Here is what Susan Collins had to say. I believe that the president has learned from this case. The president has been impeached, and that’s a pretty big lesson, you know, a as Susan, just because the president occasionally acts like a toddler doesn’t mean that you get to discipline him like a toddler, right? You don’t get to say, no, you misbehaved. You don’t get cookies after dinner. And then the toddler gets introspective and says, wow, I didn’t get cookies. Okay. Uh, I guess I’m not going to do that anymore. You know, that’s how we grow as human beings doesn’t exactly work with somebody in their mid-seventies. Right? They’ve learned throughout their life that they can do whatever the heck they want and not face any consequences. That’s Donald Trump’s life story in a nutshell.

I can do whatever I want, which he’s admitted he can do whatever he wants. I mean, remember that Access Hollywood tape, when you’re rich, they let you do it and he’s not just talking about sexually assaulting women. He’s talking about quite literally everything because that’s how the justice system in the United States works today. If you’re rich, you can get away with anything, anything you want, you can do because we don’t hold the wealthy and powerful accountable for anything and the Republicans in the Senate just proved it again. But Susan Collins out here saying, well, I think he learned his lesson. We sent him to bed early that night and he’s not going to be doing it any men. She, she actually said he’s going to be much more cautious in the future. No, he’s not. He has proven that this man is crazy and he has also lived a life without consequences, a life without consequences that you, by the way, are perpetuating today and he’s not going to learn anything.

The only lesson he has learned is that I can get away with even more than I thought. Wow. What a great lesson to send to the president of the United States. And I hope it applies to people who come after him too, because we’re going to do some pretty crazy stuff, right? You know, you let Donald Trump get away with all this and say, Oh no, the president has unlimited power. We’ll just wait till we declare a national emergency so that we can finally address the issue of climate change. Right? And we started taking money from the military’s budget to fight pollution to crack down on fossil fuels. Now that would actually be super helpful for this country. I’m not threatening like, Oh, don’t you dare cause we’re going to do this. No, we need to do that. We didn’t need to build a border wall costing $18 billion.

We don’t need a 750 plus billion dollar military budget. Susan Collins right now with this is trying to tell her voters back home where she is facing a very tough reelection, one of the most hated politicians in the United States today, by the way. She’s trying to tell them, look, we, we kind of already punished him. I know you want me to convict him here, but, but we don’t need to show, you don’t have to turn on me because trust me, the man has learned his lesson. We’ll find out in November if that line of reasoning from Susan Collins actually works, but I have a hunch that it’s probably not going to go the way that she wants it to.