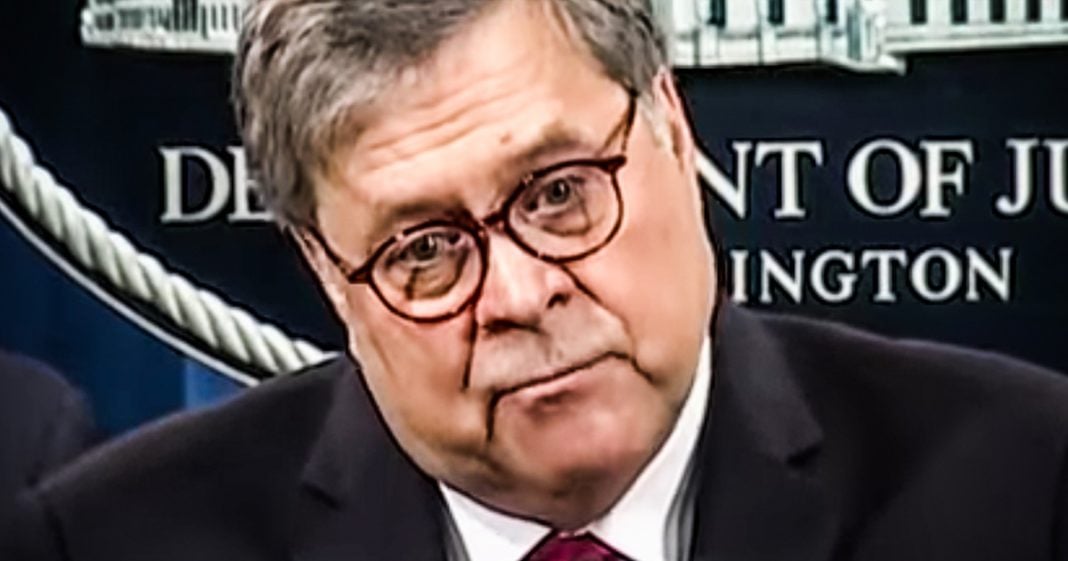 The U.S. Department of Justice is arguing in court that Democratic House subpoenas for Donald Trump’s tax returns are somehow unconstitutional, even though the House has the authority to request the tax returns from any citizen in this country, including the President. The DOJ knows that their argument is false, but they have to do everything in their power to protect Donald Trump, as Ring of Fire’s Farron Cousins explains.

The United States department of justice is currently arguing at the Supreme Court, that the president complying with a subpoena is somehow unconstitutional according to the number one law enforcement agency in the country. If the president were to obey the law, that would somehow be against the law obeying the law is against the law. We have hit peak 1984 folks. That’s what the DOJ is trying to tell us with these arguments. But what they’re doing right now is arguing in front of the Supreme Court in written arguments, um, that if Donald Trump were to comply with subpoenas for his financial records, tax returns, bank records, all that stuff from either the house of representatives or the New York attorney General’s office, if he complies with any of those than Oh my God, we have absolutely broken the law and we are just not an administration that is keen on breaking the law.

The argument for not complying with the house of representatives subpoenas for his tax information is that the, uh, house of representatives has no legislative purpose for wanting these tax returns. So, you know, we really, we can’t do that. First of all doesn’t have to have a legislative purpose. That’s not how it’s written. They have the authority to subpoena or request and then subpoena. If the request is not fulfilled any tax return from any United States citizen ever for any reason at all, they can do that. They have the authority. President is not exempt from that. And that is why every single lower court that has ruled on this has ruled against the Trump administration and DOJ his legal arguments because they are completely false. Second of all, even if they did need to have some kind of legislative purpose, the legislative purpose can also be for an investigation which the house is also allowed to conduct.

You’re not going to find anything. But if I continuously try to hide them and say, no, this isn’t a real criminal investigation. Yeah, that’s not gonna end well for me. What I would do in that instance is just hand them over. Unless of course I had something to hide as Donald Trump clearly does now, he may be hiding criminal activity. He may just be hiding the fact that he is worth a hell of a lot less than we think than he stated. Either way, he doesn’t want us to know what’s in there now for the, uh, New York investigations, they say, well, you can’t do this to the president. You know, he does have a bit of immunity here and, uh, to do so would really interfere with our daily work. You know, interfere with the duties of the presidency. They say if he complied with this, that’s their argument for New York who’s conducting a much better investigation by the way, than the house Democrats have. But nonetheless, the DOJ is trying to say that no president’s still above the law and obeying the law is now somehow against the law. Ladies and gentlemen, that is your tax dollars at work with the United States department of justice.