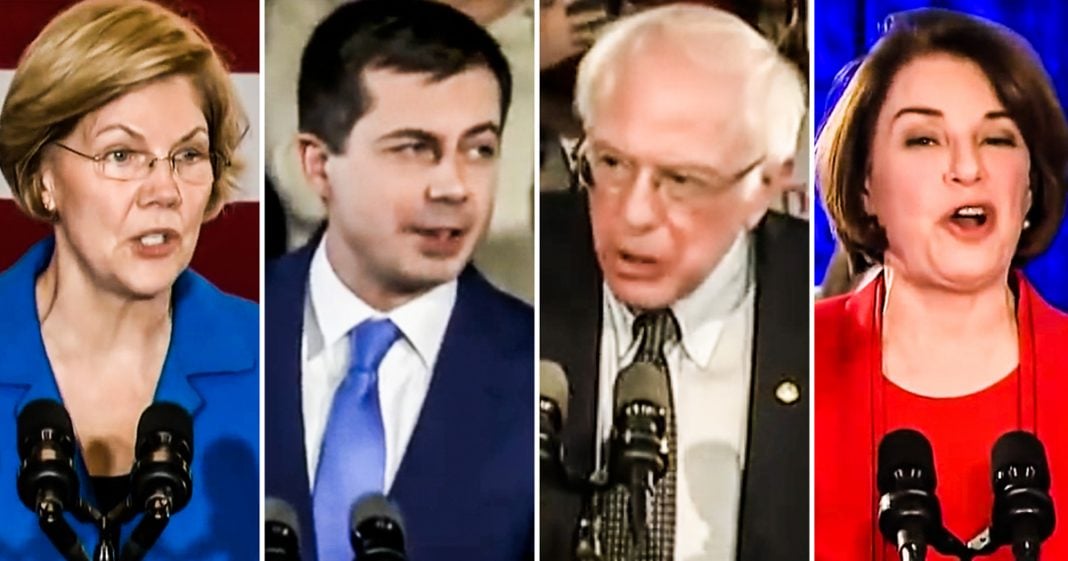 The Democratic Party isn’t looking very good after bungling the Iowa caucus on Monday evening, with their computer program screwing up the results and causing an “indefinite delay.” But even without the clear results about who won what, we do still know that there were some winners and losers from the caucus, and it wasn’t entirely predictable. Ring of Fire’s Farron Cousins discusses this.

Well folks, how about Iowa? Huh? That certainly wasn’t what anyone expected to happen, I imagined. And of course in case you haven’t been following, Iowa’s totally screwed up and a lot of people are wondering what the hell is going on because technically as of right now, we don’t even have results yet. And the reason for that is because the Democratic party, both the DNC and the Iowa state Democratic party decided that for ultra super transparency reasons, we’re going to use an app, we’re going to use an app to report the results. It’s going to help us communicate between precincts here, between caucus sites, everything will totally be great. It’s all verifiable too, because it’s right there on an app, you know, so you just put in a number and that’s allegedly transparency, according to the Democratic party. The app failed. We don’t know who the winner is.

We’ve got internal polling from Bernie Sanders that shows he is the winner. Pete Buttigieg, who we’ll get more to him in a minute, but Buttigieg actually declared victory in Iowa when we had 0% reporting. So he thinks he won and everybody’s kind of left wondering what the heck is going on. Joe Biden has already come out and said that we should all look at these results as suspect when they finally do come out and get more to that in a minute too. But let’s hit back on Buttigieg real quick. Right? This, this group that put the app together, Shadow, you know, totally. I mean, you may as well call it fraud guarantee, right? Shadow, we built your app. Pete Buttigieg campaign also paid Shadow. So, you know that, that seems a little suspicious. I’m not saying they actually did anything wrong, but right now when everything’s so screwed up and nobody knows what’s happening, even the smallest little thing is going to start to look like some kind of conspiracy. And that’s what’s happening with Buttigieg.

I do not think by any stretch of the imagination they paid them off to screw this up, but it doesn’t look good that you’ve paid the group that created the app that screwed up Iowa. And then before we had any results, you somehow come out and declare that you are, you’re the winner, not how this works. So again, we don’t know who the winner is, but folks, by God, we know who the losers are, right? Aside from the entire Democratic party, which looked like complete fools because of this whole debacle, Joe Biden was the big loser of the day. And that is one of the reasons Joe Biden’s out there saying like, well, now we can’t trust the results no matter what they are. Nope, nope. Not going to happen. There were plenty of caucus sites where Joe Biden didn’t even make it past the first round ballot.

You had Biden supporters that had to switch because he did not the vote threshold to make it to round two. He was deemed “not viable” in those particular caucus sites. So that’s a big blow to Joe Biden, for Iowa. In reality, the winner of the Iowa caucus does not necessarily go on to win the presidential election. We have seen plenty of people prevail in Iowa only to disappear a few States later. We have seen plenty of people crash in Iowa, only to, only to emerge victorious during the convention. So who knows what any of that is really going to mean because even if he didn’t win, he didn’t come in dead last. No, I believe that honor is going to go to Tom Steyer who did very, very badly. In fact, got actually beaten, I believe, according to Bernie Sanders polling numbers by Tulsi Gabbard. Andrew Yang also had an incredibly weak showing. Again, this is according to those numbers released by the Bernie Sanders campaign.

So that’s disappointing for the Yang gang. They had expected much better in Iowa. They did not do it, and that’s not good for Yang’s campaign going forward. It shows that maybe a lot of this support that we see online really only exists online. So again, disappointing for any supporter of Andrew Yang. The surprise of the evening was Klobuchar. Klobuchar didn’t do bad. Klobuchar has been polling down in the low single digits, yet somehow did exceptionally well in Iowa. So that’s going to be interesting. Is that going to be the wind in her sails that she needs to perhaps start polling better, or is it all a fluke? Because again, this is all at the moment based on internal polling numbers from the Bernie Sanders campaign. Now, I have no reason to doubt the campaign, but even they’ve admitted this is only from 40% of the state. So even if their numbers are accurate, they could be totally overturned by the remaining 60%, we don’t know what’s going on. We don’t know what the results are because the Democratic party is so incompetent and screwed up that they couldn’t even get the first caucus right, even though they’ve had four fricking years to figure it out.