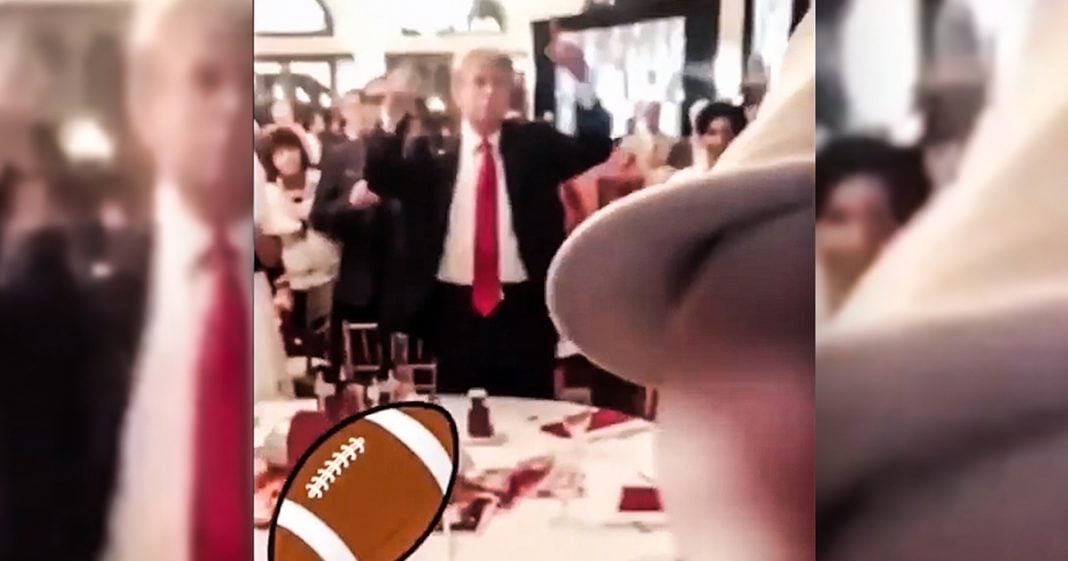 During Sunday evening’s Super Bowl Party at Mar-a-Lago, Donald Trump couldn’t stand still long enough to pretend to care about the National Anthem. Video has emerged showing Trump fidgeting and pretending to conduct an orchestra while everyone else in the room is standing respectfully. The man has zero class, as Ring of Fire’s Farron Cousins explains.

Demi Lovato:                *singing* Were so gallantly streaming? And the rocket’s red glare, the bombs bursting in air, gave proof through the night that our flag was still there.

Now, at first I wanted to compare Donald Trump to a stoned teenager, right? But then I thought that is really insulting to any teenager who smokes pot. Instead, what I have decided to compare him to is a drunken toddler. You know, maybe you left a glass of champagne sitting out on the table, kid thought it was Sprite, went up and had a couple sips and then starts doing all this crazy stuff and doesn’t know that I got to sit still and be respectful because, yeah, you do it over here guys. All Right, Nationally Anthem, hell yeah. That’s the president of the United States though. And according to him, he doesn’t drink, he doesn’t do drugs. So he was allegedly of sound body and mind. And he’s sitting there acting like a mental patient during the playing of the National Anthem. His wife and his son, Melania and Barron right next to him, hands over their heart, standing up straight, super respectful, perfectly fine.