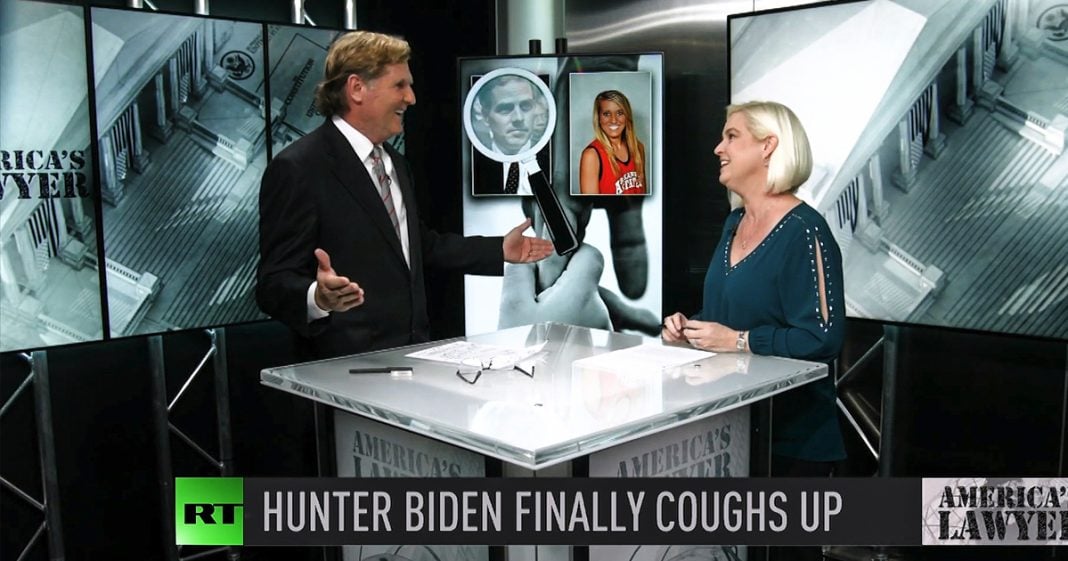 Via America’s Lawyer: Mike Papantonio is joined by legal journalist Mollye Barrows to walk us through Hunter Biden’s child support woes. After ducking payments for the child which was confirmed by paternity tests to be his, Biden will finally have to cough up monthly payments to stripper-turned-baby mama Lunden Alexis Roberts.

Mike Papantonio:             While Trump’s impeachment trial proceedings have stoked a media firestorm on Capitol Hill, the minute the epicenter of the Ukraine controversy is finally bowing to court orders for him to pay child support to his baby mama, Lunden Roberts. Here to break down the latest about Hunter Biden is legal journalist Mollye Barrows. Wow, this, the more you read this, he just, you know, you just say this guy’s a punk.

Mollye Barrows:                Well, they, it all started in Washington DC, when this cute little thing was taking classes at George Washington University and apparently she and Hunter Biden started a relationship. She later became pregnant. He paid child support for a couple of months. The baby was born, I believe in August of 2018 and then he quit paying and she was like, wait now, you owe me money. Raising a kid is expensive.

Mollye Barrows:                So then they filed, then they, he took a test. He agreed to take a test. He was proven the daddy. It was scientifically impossible for him not to be the daddy or something along those lines in January of last year, but he still wasn’t paying child support. He was like, I’m not employed.

Mollye Barrows:                Right. Yeah. So this was back in December. He had been dragging his feet. He hadn’t been agreeing to pay any child support. He’d been making her take him to court, basically. And so she did and the judge said, let’s take a look. Since we know now that you’re the dad, let’s take a look at your tax, you know, your financials going back five years. They provided their information. He did not provide a full disclosure, if you will, and so her attorney said, hey man, we need to see all your documents. The judge said so. Judge, he hasn’t filed, we want you to hold him in contempt of court and this was under a guy named judge, McSpadden, and he has since recused himself from this case and they have a new judge in the case circuit judge, Holly Meyer. But both of them did say you need to come up with this information. And she gave him until Wednesday of this week to come up with it. Otherwise he was going to have a mandatory court appearance in Arkansas.

Mike Papantonio:             I was a very young lawyer. Maybe been out of law school for a year and I had to handle a few of these custody cases and there’s always a punk on the other side of the table.

Mollye Barrows:                Right, oh, that’s what they’re saying, that she’s just dragging this out because of what’s going on with the Ukraine and impeachment problem.

Mike Papantonio:             Or if you don’t show up, I have the ability to default this thing and we’re going to give her everything she’s entitled to.

Mollye Barrows:                And it makes you wonder how far he would have allowed that progress if it weren’t for the fact that these impeachment hearings were going on.

Mollye Barrows:                Because I’m sure that, you know, that their names have been thrown about all about, and they don’t want him appearing in court.