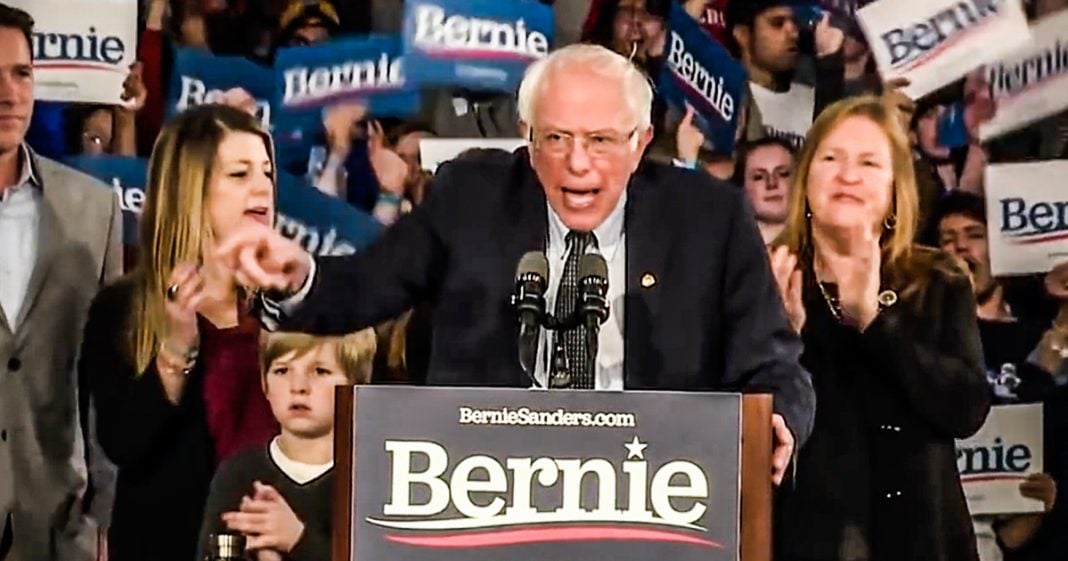 The folks on Wall Street are starting to freak out over the fact that Bernie Sanders keeps rising in the polls, and they want to do whatever they can to stop him. They have taken to warning that a Sanders Presidency could topple the stock market, but these fears and warnings are not actually based in reality. The stock market didn’t tank during the New Deal, and it won’t tank under a Sanders administration, either. Ring of Fire’s Farron Cousins discusses this.

Over the past few days, I’ve been inundated with articles telling us how Wall Street is not happy that Bernie Sanders is surging, pretty much to first place, in the Democratic primary. Another one of these articles came out late yesterday, title from Yahoo finance was, here’s how Bernie Sanders could cripple the stock market as president. We’ve seen talk of this in other national newspapers, major newspapers, talking about how Bernie Sanders going to be bad for the stock market. You know, oh my God, all hell is going to break loose if Bernie Sanders becomes president. And this particular article from Yahoo finance talks about how bad it would be to not just have Bernie Sanders as president, but what if he appoints Elizabeth Warren to be the chairwoman of the federal reserve? Oh my God, the bankers are freaking out over that prospect. The reporter on this particular article talked to some hedge fund managers, you know, capital firms, things like that.

The, the folks running those things that nobody really quite knows what they are or what they do unless you’re involved in the stock market. The rest of us kind of shake our heads at that. Like what? But anyway, these people who move money from one place to another and make tons of money doing that are panicked because they think that Bernie Sanders and Elizabeth Warren are going to burn down the entire system and tank the US economy as a result of it. And they’re half right. We’re going to burn down the system, folks. We’re going to overhaul things. We’re going to put some regulations in place and we’re going to tax you to hell and back because you deserve it and you can afford it. As for burning down the economy in the process, that’s not something that’s going to happen. See, here’s what the rich and powerful don’t want you to understand.

And the last 40 years basically have been them trying to convince you of the opposite of this, but here it is. This economy only truly grows when the working class gets more money, when the working class is taken care of. Oh sure, the stock market sores when the rich and powerful get more tax breaks. When corporations get tax breaks, when we repeal environmental regulations, corporations cash in on that, but the middle-class suffers. They don’t get raises, they don’t get tax cuts, they get more poison in their drinking water and they’re harmed for that. And then they try to go to the doctor because they’ve been poisoned by the water they’re drinking, contaminated with these corporate toxins, and they get slapped with a $300 or $400 bill that they can’t pay, even if they have insurance. So they suffer even more from all of this, from the way the system is designed. And yeah, Bernie Sanders wants to overhaul that and he wants to change things and you know what? At first, yeah, the stock market’s probably going to take a bit of a dip, but then you know what’s going to happen. Pensions are going to increase. Suddenly this working class that didn’t have a nickel to spare can start saving for retirement and where to most retirement funds go? Into the stock market

And that’s going to make things better. Suddenly the middle-class is going to have more cash on hand. If we do increase the federal minimum wage and we do enact Medicare For All and they don’t have to pay those premiums or anything at point of service anymore, they have more money. And you know what the middle-class does when they get more money? They go out and spend it because they have to. But at this point, some of that spending could be because they want to. Maybe they can go out and buy that new TV. Maybe they don’t have to put off buying a new car and every thing that they buy helps the economy and creates jobs.

And when you have middle-class people spending money, the economy growing and goods being sold, the stock market increases and it doesn’t matter how much you tax millionaires and billionaires, that stock market’s still going to go up when people are out there spending more money. All of these lies from these major papers telling us that Bernie Sanders or Elizabeth Warren will cripple the stock market are lies. They’re lies. They’re lies written by people who have something to lose if one of these people become president and the thing they have the lose is money. But not money from the stock market, the money that they have been hoarding for their entire lives will suddenly not be untouchable anymore and we’re going to take a little bit of it away to help pay for these universal programs that this country desperately needs.