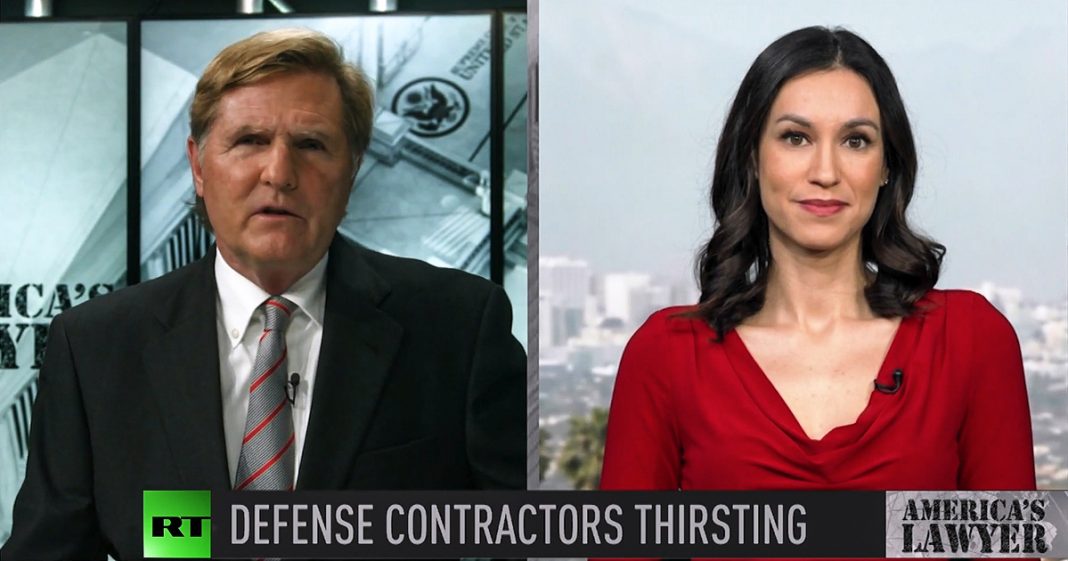 Via America’s Lawyer: RT correspondent Brigida Santos joins Mike Papantonio to spotlight the over 50,000 soldiers that are actually private contractors working with the Defense Department within the US’s ‘Area of Responsibility” that spans over a dozen countries in the Middle East.

Mike Papantonio:             Increasingly relies on private contractors and foreign military operations. As a result, war are becoming less obvious to the public. RTs Brigida Santos joins me now from Los Angeles with that story. Brigida, how are you?

Mike Papantonio:             Listen, why, why is it important to, why, why is it important to have a public debate about the growing use of military contractors nowadays? If you look at the numbers, no time in history besides the Korean war and the Vietnam war, have we seen the Pentagon getting as much money as they’re getting right now. Squander, squandering it basically on contractors. Give me your take.

Brigida Santos:                   Well, it’s important because private military contractors allow presidents to flex American muscle without congressional oversight because it’s not always clear how private mercenary armies are formed, where they operate or even what their mission’s consist of. The Pentagon doesn’t typically even track private troop deaths, and this is done by design. It’s a clever way to circumvent democratic accountability for military force and it’s more convenient. The public doesn’t seem to care as much when it hears that paid American military contractors are dying in conflict zones than when they see US service members sent home in body bags. For example, there wasn’t a big media reaction when several military contractors were killed this month in Kenya.

Mike Papantonio:             Well, there’s almost a standing joke in Washington DC right now and around the Virginia area, and that is that there are more mansions built by military contractors than there ever have been in Washington DC. It, it sounds like, sounds like simpleton talk, but it’s not, that’s the actual truth because the Pentagon is sucking so much money from the economy and putting it into the hands of military contractors. Who, by the way, I thought this is incredible, those same military contractors, the, the Pentagon spent $40 million, $40 million on a gas station in the middle of nowhere, in one of the desert conflicts in Afghanistan. So if you look at the whole money, it’s, what is it, $2 trillion that they’ve squandered? And I’m wondering how many contractors does the department of defense currently have working overseas? I mean, at least on paper, what does it look like?

Brigida Santos:                   Well, according to the data, during the first quarter of fiscal year 2020 US central command reported over 50,000 supporting contractor personnel in the US CENTCOM area of responsibility, which spans across at least 20 countries. The area of responsibility encompasses globally vital commercial sea lanes, flight corridors and pipelines. CENTCOM’s forces focus on regions where US national interests and the interests of its trusted partners are at risk. Some of those regions include Afghanistan, as you said, Iraq and Syria, where private contractors have been sent to assist. Now, it’s important to note that not all contractors are there in a combat capacity. Some are there for transportation, medical services and logistics, but the point is the number of contractors has been on the rise and that trend is likely to continue. It’s important to note that when president Trump says that he’s going to bring home the troops, it doesn’t necessarily mean that US wars are over. It might just mean that they’re about to go corporate through this privatization.

Mike Papantonio:             Well, let me tell you something that the Pentagon engineered that most, most viewers don’t understand. There’s something that’s called Qui Tam. It’s called a whistleblower case. Okay. The Trump administration has said to the department of justice, ignore whistleblower cases that are related to Pentagon money. Okay. They’re still bringing Pentagon cases, they’re still bringing cases in Qui Tam, if it has to do with hospital corruption, which is a good thing. But can you imagine getting to the point where you have a, you have a Pentagon that has more money than they’ve ever had since Vietnam or Korea. And on top of that, to make it worse, the administration saying, when we find out that they’re actually involved in corruption, don’t prosecute those cases. When did this trend towards privatization begin? Because that’s part of the problem here, isn’t it?

Brigida Santos:                   It’s a huge part of the problem because again, it doesn’t allow for oversight. When you hire these contractors, they’re not subject to the same laws necessarily that the government would be. Now it didn’t start with president Trump, he’s just taking it to the next level. In 2016 under president Obama, more private military contractors died in Iraq and Afghanistan than all US troops deployed to those countries. Meaning mercenaries were the silent majority of Obama’s military. Under George W Bush’s administration, Blackwater employees killed 17 Iraqi civilians in Nisour Square. The Blackwater contractors were prosecuted, but the company’s founder, Eric Prince, was not. And he’s now working behind the scenes as an unofficial figure in the Trump administration. Prince has publicly advocated for replacing American troops in Syria and Afghanistan with more contractors. And during the Bush administration, contractors were also hired, let’s not forget to run the CIA’s torture program.

Brigida Santos:                   At the end of last year, the families of over 100 service members who were killed in US conflicts, sued major defense contractors for reportedly making illegal protection payments to the Taliban to prevent the terror group from attacking their business interests. The bottom line here, Mike, is that these corporate military forces conduct semi-official plausibly deniable military operations, often using taxpayer money in our names, when it’s really on behalf of protecting multinational corporations. Really just creating, you know, a global market for war by allowing these mercenaries to go in and, and fight wars for profit.

Mike Papantonio:             Corporate media is not helping tell this story. So thank you for joining me so we can at least get it out there a little bit. Thank you, Brigida.