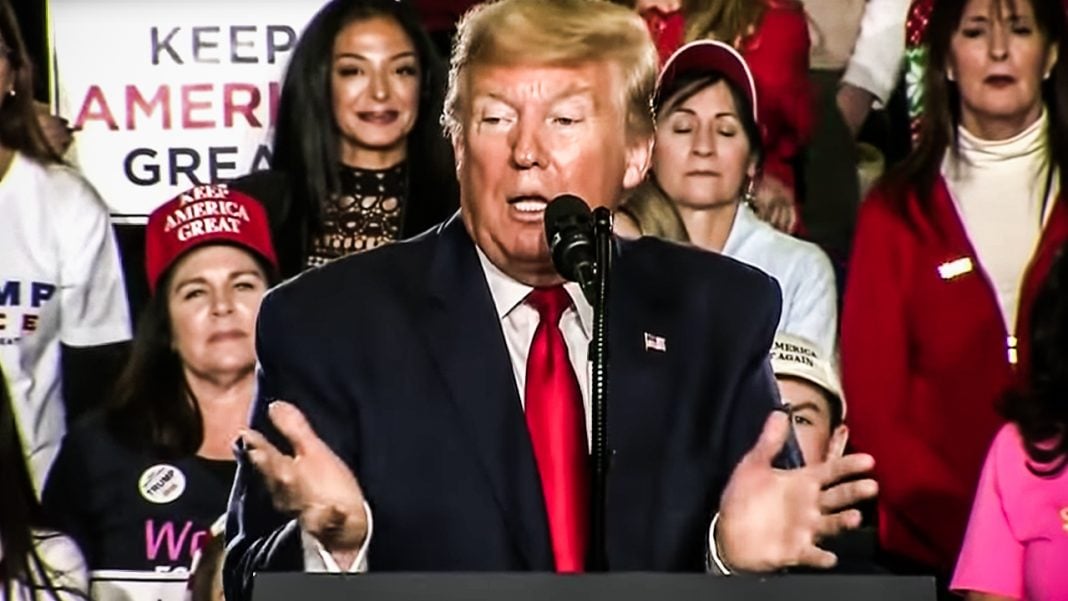 Friends of Donald Trump are holding events in African American communities and handing out envelopes filled with hundreds of dollars to some lucky attendees. These events are nothing more than pro-Trump rallies, touting his successes before bribing African Americans to vote for him in November. This move is likely illegal, and Ring of Fire’s Farron Cousins explains why.

In spite of the fact that Donald Trump goes on Twitter relentlessly telling us how great things are for African Americans here in the United States, under his administration, he’s still struggling with voters of color here in the United States. They simply don’t like him. They don’t trust him. And they have very good reason to because as we’ve seen from Donald Trump’s policies, he really doesn’t care about anybody except elderly, white, rich men. And so his buddies, you know, the people that helped put him in office, the major donors and organizers, have decided we have a very real African American problem with the president. So how do we overcome this? Oh, I know, one organizer said, let’s just start handing them envelopes of cash in hopes that they’ll vote for Donald Trump. In short, let’s bribe members of the African American community to vote for Donald Trump. And that is exactly what happen, what’s happening right now.

A man by the name of Darrell Scott, who runs the urban revitalization coalition, worked closely with Donald Trump’s 2016 campaign. Mr. Scott is African American himself, has tons of money, goes to the White House all the time. Reports say he is a fixture among the West wing. So he goes there and he talks to the president, but what he and his little organization, which is a nonprofit by the way, and we’ll get to that in a moment, what they’re doing is they held an event recently in Cleveland and everybody went and got a ticket, kind of like a raffle. And the other part of the ticket goes in this big drum. At the end, they start drawing tickets, if it’s your ticket match. You walk up there, you get your prize, and oh my God, it’s an envelope filled with a couple hundred dollars, $300, $400, $600, they’re just giving cash away.

But before the big cash giveaway, which you have to be present to win, they say, just like a typical sweepstakes. They’re sitting there talking about how great Donald Trump has been, how great he is for the African American community, how great he is for the country, how great he is in general as a human being. It’s a Trump rally except not officially endorsed by the Trump campaign or the Trump administration. Just some good buddies of Donald Trump out there handing out cash, illegally. And that brings us back to the nonprofit part. This organization is handing out this cash as part of their 501 c3 status, which means their spending has to be on charity. Also means that their spending cannot be used on anything political. So if they used any of their money to rent out these facilities where they’re holding these meetings and then go out there and extol the virtues of Donald Trump, that would be illegal.

Handing out cash to people who do not necessarily need it or people who you have not vetted to see if they need it, is also illegal. They’re illegally bribing African Americans to get them to vote for Donald Trump and they’re planning more rallies all over the country, or at least until the courts shut them down, which they eventually will. Because if there’s one thing you can’t do in this country, it’s go out there and hand somebody a stack a cash and tell them who to vote for. Even with Citizens United, even with McCutcheon, handing people cash directly and saying, go vote for this thing is still considered bribery here in the United States, at least for now. But, you know, that’s another part of this story that’s kind of scary. What if this makes it to the Supreme Court? What if that right-wing Supreme Court says, no, you know what? This is fine. You can do this, it’s legal. If they make that decision, that’s the end of this country as we know it, and that’s a scary thought. But unfortunately, given what we’ve seen in this country over the last 10 years, it’s certainly not out of the realm of possibility.