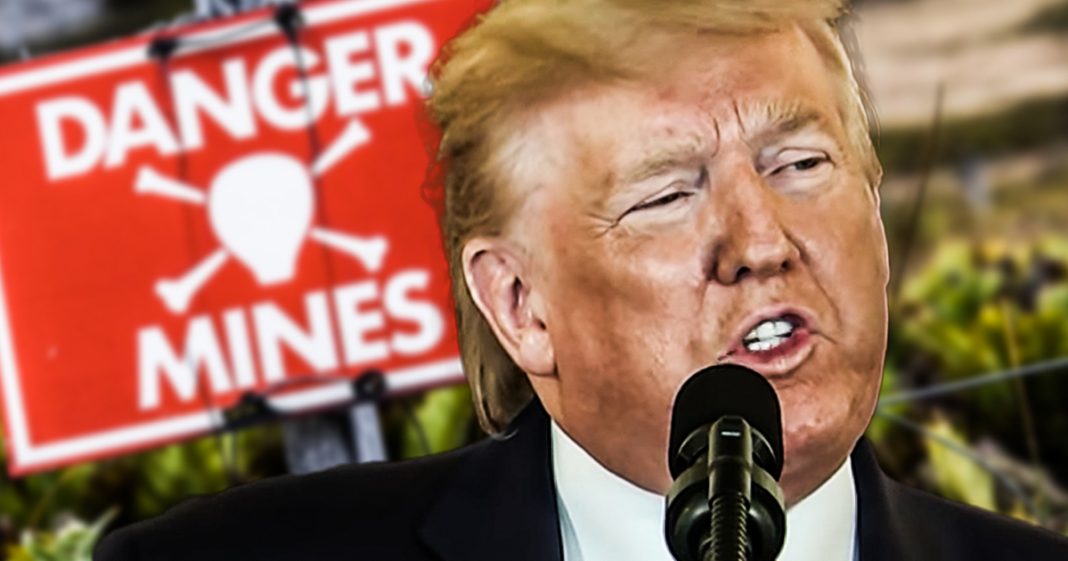 Donald Trump has lifted restrictions on the use of landmines for the U.S. military, making this country one of the only on this planet to say that these deadly weapons that mostly kill civilians are ok. 164 countries have banned the use of landmines, and the majority of the casualties from the remaining landmines in the ground are not just civilians – they are children. Ring of Fire’s Farron Cousins discusses this.

Surely before he headed off to his Super Bowl weekend of partying at Mar-a-Lago on Friday, Donald Trump made an announcement that really didn’t get as much coverage as it really, really should have, and that announcement was that he’s no longer going to have any restrictions on the use of landmines by the United States military. Back in 2014 Barack Obama had put severe restrictions on land mines here in the United States or for the United States military, I should say. The only place we could use them would be in the demilitarized zone in between North Korea and South Korea, and we would only do that in the defense of South Korea. You could not put a landmine anywhere else on this planet, under those rules Obama put in place and because it was an Obama rule, Trump decided, I’m going to get rid of it because we need more landmines, Donald Trump says. But the reason Donald Trump is saying this is because his, Mark Esper, the secretary of defense, former lobbyist for Raytheon and other defense contractors was in his ear saying that we as a military cannot be successful if we do not have all the tools that we need, and one of those tools that we need is fricking landmines, which 164 countries around the planet had already banned.

They banned them, 164 countries, banned them, can’t use them. They kill civilians, they kill children. In fact, they do that more than they actually kill the bad guys. So 164 countries said, yeah, we’re not going to do this anymore. But Mark Esper says, oh no, no, Trump. Russia uses them. China uses them. We should use them. And Trump being the moron that he is, says, okay, let’s put these things back out there. I want to read something here from the BBC. This tells you the story of how deadly and dangerous landmines truly are. In 2017, more than 7,000 casualties were caused by mines and other explosive remnants of war, including nearly 2,800 deaths, more than 120,000 people have been killed or injured by landmines between 1999 and 2017, and nearly half of the victims are children and civilians make up 87% of the casualties. So 87% of the people out there stepping on landmines are just average everyday people going about their lives. And half of those are kids. Thousands of kids die, hundreds of thousands over the last couple of years, and Trump says, yeah, let’s do that again.