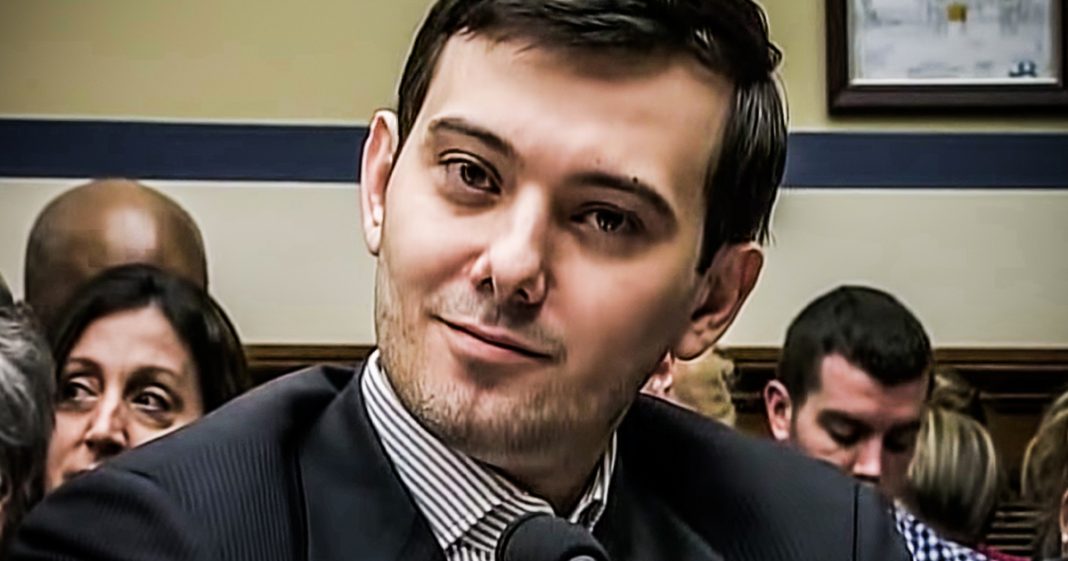 “Pharma Bro” Martin Shkreli has been hit with federal charges of price fixing for allegedly preventing a generic version of the drug Daraprim from coming to the market. Shkreli is already serving 7 years in prison for defrauding investors, and these new charges could add to his sentence. Ring of Fire’s Farron Cousins explains what’s happening.

Pharma Bro, Martin Shkreli, was hit with new charges this week and a lawsuit from the federal trade commission and the New York attorney general’s office alleging that Shkreli was engaged in a price fixing scam with the drug Daraprim. Now as you remember, Daraprim is the drug that got Martin Shkreli in trouble to begin with, not with the law but with the public because he got the, bought the drug company, got the patent for Daraprim, and then in one single day increased the price by 4000% and that got everybody paying attention to Martin Shkreli. Oh my God, what a horrible thing to do for this toxoplasmosis drug, that is vitally important. It went from pennies to dollars. You’re a jerk, Martin Shkreli, everybody thought, and they were right about that. But then once people started to look, they found out, oh no, securities fraud and conspiracy, Martin Shkreli was ripping off rich people.

We’ve got to prosecute him for that. And they did and he got seven years in jail and he is currently serving that sentence. And this week, finally, finally, I mean we’re talking years later, federal trade commission, New York attorney general finally decided to say, you know what, maybe we ought to do something about that drug price thing that he did. Right? That sounds pretty bad. Let’s look into it. And they looked into it and what they found allegedly, what they’re alleging is that Shkreli and his drug company at the time, tried to push out competitors, block any generics to Daraprim from making it to the market so that they could raise their price and be the only option out there. That’s price fixing. That is illegal if in fact the company did it because, you know, you always got to say allegedly. Anyway, here’s my problem with all this.

One, did he do it? Yes, he did it. We know he did it. Two, drug companies do this every day. Every other drug company is doing this right now. We have run stories on this here on Ring of Fire constantly for years and years and years. And that’s why this story makes me want to pull out what little of my hair I have left. Every drug company engages in this same behavior. There have been massive investigative reports proving this, that you have your major drug companies out there paying off the generic drug companies to wait another year or two before they come to market so that the big pharmaceutical companies can milk one more year of billions of dollars out of a pill before the generic comes out there. They are paying these smaller drug companies, the generic drug companies, to keep their drugs off the market. How is that not what Martin Shkreli is being sued for right now? Huh? Where are the lawsuits against Merck or Eli Lilly or Pfizer or any of the rest of them? They’re all doing the same thing and the 4000% price hike on Daraprim, yeah, it was gross and disgusting of Martin Shkreli to do that.

They’re all doing that too, though. I don’t understand why Martin Shkreli is in jail, but the CEO of Pfizer isn’t. The CEO of Eli Lilly or Merck or Mylan, the people who make the epipens and they jacked those prices up to where I can’t even afford them for my kids anymore. They’re all doing the same thing. Shkreli was accused of, Shkreli’s in prison for.

And yet they get to go home to their multimillion dollar penthouses, mansions, wherever the hell it is they’re living and they’re not being investigated, they’re not getting in trouble, and every one of them is doing the exact same thing that Shkreli did, with the exception of one thing. As I pointed out, Shkreli’s in jail for securities fraud. He ripped off rich people, which is always a crime. Just like Bernie Madoff took money from rich people, went to jail. But, you screw over poor people, you steal their money, no. Our justice system has absolutely no problem with major corporations doing that. Just don’t go after the rich people and you’ll be fine.