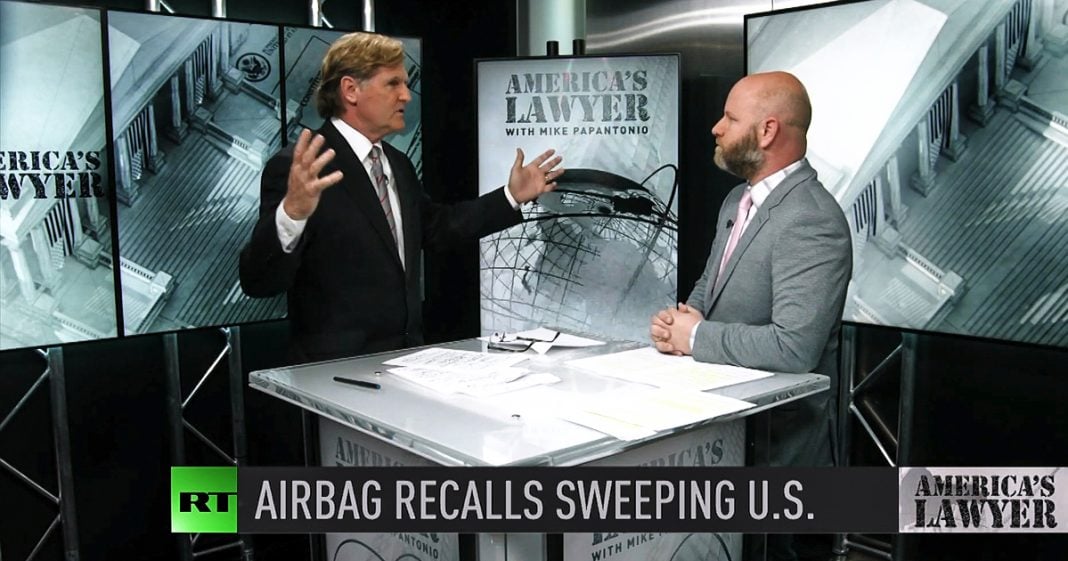 Via America’s Lawyer: Media outlets are failing to alert Americans of over 5 million vehicle recalls due to faulty airbags. Mike Papantonio and Farron Cousins discuss.

Mike Papantonio:             Last week, more than 5 million vehicles were recalled for faulty airbags and the corporate media didn’t bother telling you about this. No surprise here, right? You know, what’s more important is, you know, what, what are the Kardashian’s wearing to the, to the latest award ceremonies. That’s kind of the state of, of modern journalism.

Farron Cousins:                  Right, and of course, you know, the gotta, gotta talk nonstop about the impeachment hearings and yet here we are more than 5 million vehicles just in the United States. A couple million more outside the United States recalled last week for faulty airbags that will not work if you get into an accident. 5 million of these cars are on the road right now today, and nobody has mentioned this.

Mike Papantonio:             Okay, here’s, here again. Let’s talk about the state of American journalism. Okay. Just, just finished the Greenwald story. Greenwald went into areas of, talking about the bigger problem of sustainable economics in South America. It was, that’s, that’s really where he’s headed with this whole investigative journalism. This is a story where the, the American journalism system, I mean what we have is called corporate media, call it what you want to call it. They, they, they’re almost unwilling to dig into the facts here. Why? Okay. Well let’s, let’s, let me give you the why. The why’s. The why’s are, are Honda. The why’s are Kia. The why’s are Fiat Chrysler. The why’s are the advertisements that flow from those stories. You were here with me when I was trying to do a story one time on a, one of Joe Scarborough’s shows.

I used, I used to come on MSNBC and I’m talking about a wood, an arsenic wood that is, that is so packed with arsenic that it’s almost off the scale, that the company was using to make children’s playground equipment. In, so I do the story. Facts are there. It’s very clear. Phil Griffin from the very top is upset because the advertiser called him and said, I had to go on the air and apologize. No, well you know how that react. I wasn’t going to apologize about anything. This is another part of the problem. The problem is if an advertiser is spending a gazillion dollars with corporate media, they won’t do a story like this. This is a serious story, isn’t it?

Farron Cousins:                  Right. And right now, even the, you know, few independent stories about this are talking about yes, the 5 million cars. Yes, it’s two separate issues about half and half. One of them is a Takata airbag where the inflator does not work. The other one they’re saying, oh well, it’s some kind of an electrical glitch. There’s no, there’s no buffer. They say in the electric, electronics of the car, so come in, we’ll fix it. But no, that’s not that. That’s the problem. The other problem is why aren’t we having investigative reporters getting these documents from the companies, reporting on it, telling us how many pennies they saved by cutting these corners?

Mike Papantonio:             Unless you take them to court and you look at the documents where there’s skullduggery at its very worst. It’s creepy, creepy skullduggery and corruption. Media doesn’t do it anymore. They didn’t do it on opioids until we brought the case there. They didn’t do it on, on human trafficking until, you know, they’re just now starting. We brought the case there. 38 pharmaceutical companies that created products that were killing people. The media didn’t get involved until the lawsuit was brought because the advertisers wouldn’t let them.

Farron Cousins:                  Well, and NHTSA, you know, national highway transportation safety administration, has linked at least eight deaths to these faulty airbags. And to me, this is reminiscent of the failure of the GM ignition switch. $2 part.